Born and raised in Nashville Tennessee, Harvard graduate Caroline Randall Williams is an award-winning poet, young adult novelist, and cookbook author as well as an activist, public intellectual, performance artist, and scholar. She joins the faculty of Vanderbilt University in the Fall of 2019 as a Writer-in-Residence in Medicine, Health, and Society while she continues to work and speak to the places where art, business, and scholarship intersect, moving people closer to their best lives and corporations closer to their ideal identities. She has spoken in twenty states: Alabama, Arkansas, California, Florida, Georgia, Louisiana, Maryland, Massachusetts, Michigan, Minnesota, Mississippi, Nevada, New Hampshire, New York, Oregon, Pennsylvania, Tennessee, Texas, Washington and West Virginia, in venues that range from as small as a classroom in a neighborhood school to as large as the Superdome mainstage during Essence Fest. To every speaking engagement Caroline brings a fierce intelligence, disarming charm, a touch of glamour, and a depth of lived experience that belies her thirty-one years. She has taught in two of the poorest states in the union — Mississippi and West Virginia — and she has been educated at two of the richest universities on the globe — Harvard and Oxford. She is an accomplished artist on the page and on the stage, and she is a successful entrepreneur with an exceptionally diverse investment portfolio that includes ownership stake in a nationally acclaimed restaurant and Facebook stock purchased so early it is still profitable. Read More >

You may have seen her on Morning Joe, or Dr. Oz, or Hardball with Chris Matthews. More likely you’ve read her. Caroline’s first book, The Diary of B.B. Bright, Possible Princess (co-authored with Alice Randall) won the Harlem Book Fair’s Phillis Wheatley Prize and was a finalist for the NAACP Image Award. Her second co-authored volume, Soul Food Love won the NAACP Image Award and got her invited to speak at The Smithsonian. In 2017 the New York Times published an op-ed she wrote, and it went viral. Her book of poetry, Lucy Negro Redux, earned rave reviews and got optioned to become a ballet. In 2019 the ballet debuted to more rave reviews with the New York Times review concluding that Lucy Negro Redux was “something wildly original, something so unlike anything else that all description falls short of its otherworldly reality. A place where, when the curtain drops, the very city cries out: “Brava! Brava! Oh, brava!” Another reviewer wrote, “All this is to say that Attitude: Lucy Negro Redux is not just original, but revolutionary — marking a seismic shift in the art form not just in Nashville, but in dance the world-over.” No wonder she was chosen in 2015 by Southern Living as one of “50 People Changing the South” for her work around food justice, and in 2016 as a national Neiman Marcus “Face of Beauty” because she personifies “beauty, brains, and passion.”

After graduating from Harvard University, where her undergraduate thesis received Magna Cum Laude honors, Caroline moved to Mississippi where she taught public school on a dirt road in Sunflower County for two years. In Mississippi, Caroline lived in an America many Americans are hardly aware of any longer, an America as rich in culture as it is wretched in poverty, towns still split into white and black by train tracks and bridges. During her second year, she taught 9th grade English to 86 kids who didn’t have a book to take home. She got that job by tutoring eight kids who the state of Mississippi said couldn’t pass the English exit exam—eight for eight, her kids passed.

Caroline is a catalyst. She makes change possible by bringing art and joy into the room in such a way that the grit of real challenge and limits may become eclipsed by analysis, innovation, and skill. Read Less ^

This talk examines what it means to actually do the work of making people from diverse backgrounds feel welcome in shared space. Caroline uses everything from Shakespeare to Soul Food to engage the audience in a conversation that is ultimately all about empathy.

Collaboration: A Creative Perspective on What it Really Takes to Make Co-Working Work

Caroline uses her many experiences as a co-writer and co-creator across many disciplines to discuss what it takes to make working together work.

Building Bridges: The Hard Conversations About Race that We Need to Be Having & How to Have Them

Caroline has lived and taught in wildly diverse spaces, from the backroads of the Mississippi Delta to the mountains of West Virginia, and she always works to find a way to connect, with her students and with her sense of place. It has allowed her to come to some uniquely helpful insights about the types of conversations we need to be having and how to go about this important work.

Caroline discusses how the blues is at the heart of our collective cultural identity.

Caroline is a cookbook author, a journalist, a poet, a professor, a performer, and finds a way for each hat she wears to inform the others. Engaging with your divergent gifts allows you to be your most successful self.

The food we eat tells stories. We can come to know so much about ourselves, our history, and how we interact with the world, simply by coming to the literal (and figurative) table.

"Caroline Randall Williams spoke at Creative Mornings Nashville on Inclusivity and had everyone in the audience mesmerized with her talk. She knows how to engage an audience and hit them hard with the truth. A truth they may feel uncomfortable facing or discussing, but a truth they knew all along. Hearing Caroline illuminate each person with these truths leaves the audience feeling unified, ready to help and make changes! After you hear Caroline your life will never be the same! And if it is the same… you weren’t listening!!!"

"Caroline Randall Williams is a bold voice, a keen thinker, unbowed by convention. I’ve watched her step to the podium many times to charm and inspire and challenge audiences. She does this work with a joy and serious of purpose that has made her a trusted and beloved collaborator for the Southern Foodways Alliance."

"In forty years in public schools, serving as a teacher, principal, I have attended hundreds of author events in elementary and middle schools. Caroline Randall Williams’s Recipe Poem workshop enthralled students and amazed teachers who couldn’t believe how many hard skills she was able to impart-- while being utterly entertaining and truly inspiring to students and faculty."

"Caroline Randall Williams taught us methods that moved us beyond our poetic paralysis. We were her willing students, listening and watching her transform from our beloved teacher to our beloved muse."

"Want to get some stodgy old guys to think about Shakespeare, women, ballet, poetry, and a few other things in a new and positive light—get Caroline Randall Williams up on the stage."

The Diary of B. B. Bright, Possible Princess

LUCY NEGRO, REDUX: The Bard, a Book, and a Ballet

Soul Food Love: Healthy Recipes Inspired by One Hundred Years of Cooking in a Black Family 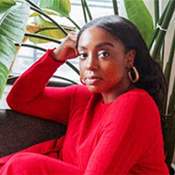