Dr. Michael J. Sorrell is the longest-serving President in the 149-year history of Paul Quinn College. During his 14 years of leadership, Paul Quinn has become a nationally regarded institution for its efforts to remake higher education in order to serve the needs of under-resourced students and their communities. Read More >

Included among Paul Quinn’s numerous accomplishments during President Sorrell’s tenure are the following: winning the HBCU of the Year, HBCU Student Government Association of the Year, and HBCU Business Program of the Year awards; achieving recognition as a member of the President’s Higher Education Community Service Honor Roll; creating the New Urban College Model; demolishing 15 abandoned campus buildings; partnering with PepsiCo to transform the football field into the WE over Me Farm; achieving full-accreditation from the Transnational Association of Christian Colleges and Schools (TRACS); creating the College’s first faculty-led study abroad program; and rewriting all institutional fundraising records.

President Sorrell is one of the most decorated college presidents in America. Recently, President George W. Bush and the George W. Bush Presidential Center awarded him the Bush Institute Trailblazer Citation. He has been named one of the World’s 50 Greatest Leaders by Fortune Magazine; is the only three time recipient of the HBCU Male President of the Year Award (2018, 2016 and 2012); won Higher Education’s President of the Year award as named by Education Dive; and Time Magazine listed him as one of the “31 People Changing the South.” Washington Monthly Magazine identified him as one of America’s 10 Most Innovative College Presidents and Rev. Jesse Jackson, Sr. and PUSH/Excel honored him with its Education Leadership Award. Michael is the recipient of both the Dallas Bar Association’s Dr. Martin Luther King, Jr. Justice Award and the City of Dallas’ Father of the Year Award. In addition to being a member of the “Root 100” (a list of the top 100 emerging leaders in America) by the Root Online Magazine, Michael has received: the Distinguished Alumni Award from Duke University, the University of Pennsylvania’s Graduate School of Education, and St. Ignatius College Prep in Chicago, Illinois; the A. Kenneth Pye Award for Excellence in Education from Duke University’s School of Law Alumni Association; the Social Innovator Award from Babson College; the Vision Award, Center for Social Entrepreneurship, Middlebury College; Luminary Award from SMU; and the TRACS Leadership Award. The Dallas Historical Society honored Michael for Excellence in Educational Administration. He is a past recipient of the Dallas Urban League’s Torch for Community Leadership and both the President’s and C.B. Bunkley Awards from J.L. Turner for his outstanding contributions to the Dallas legal community. Michael also has an honorary degree from Austin College.

Michael received his J.D. and M.A. in Public Policy from Duke University and his Ed.D. from the University of Pennsylvania (where his dissertation defense was awarded “with Distinction”). While in law school, he was one of the founding members of the Journal of Gender Law & Policy and served as the Vice President of the Duke Bar Association. Michael was a recipient of a Sloan Foundation Graduate Fellowship, which funded his studies at both Harvard University’s Kennedy School of Government (as a graduate fellow) and Duke University. He graduated from Oberlin College with a B.A. in Government, served as Secretary Treasurer of his senior class, was a two-time captain of the men’s varsity basketball team, and graduated as the school’s fifth all-time leading scorer.

Among the entities that President Sorrell serves as a trustee or director for are Duke University’s School of Law, the Graduate School of Education at the University of Pennsylvania, JP Morgan Chase’s Advancing Black Pathways, Amegy Bank, the Hockaday School, the Dallas Advisory Board of Teach for America, the Dallas Foundation, and EarthX.

President Sorrell is married to the former Natalie Jenkins. Natalie is an alumna of Spelman College and the Wharton School at the University of Pennsylvania. They have two wonderful children, Michael Augustus and Sage Louise-Sinclair. Read Less ^

Less of a College and More of a Movement

Fall In Love With Justice

The Leaders We Need Now

Everything has changed. We are now living in a society that is struggling under the weight of a collective trauma. COVID-19 touched everyone and everything in the world. This fall, the higher education community is expected to return to “normal”. Yet, for those of us who work in this field, we know that we are a long way from normal. Leading in this type of environment will require a new set of skills that demands intellectual, physical, and emotional nimbleness that we have never been asked to display. In this speech – “The Leaders We Need Now”, Dr. Michael J. Sorrell will discuss our collective new reality and how to become the type of leader that our students and schools need now.

How did the president of a small, historically black college serving low income students end up alongside Tim Cook and Bill Gates on the Fortune list of the world’s top 50 leaders? The answer: Michael Sorrell’s transformational brand of values-driven leadership. Taking on the challenge of turning around struggling Paul Quinn College in Dallas, Sorrell — who brought a background ranging from corporate securities law to working in the White House — forged a bold, mission-based vision that fueled an innovation-driven culture. He also developed inspiring, actionable core values that stakeholders — from students and faculty to local residents and the business community — could embrace and champion. Creating an institutional ethos of “Me Over We,” a mission to end intergenerational poverty and four guiding principles, Sorrell literally transformed Paul Quinn into a new model for higher education. In this energizing keynote, he shares leadership lessons that can be applied to transforming any type organization — from the corporate world to healthcare, education and more.

Becoming an Anchor Institution in Your Community

When Michael Sorrell transformed Paul Quinn College, he also transformed the surrounding community. As an anchor institution with a mission to end intergenerational poverty, PQC became a center of community life and a strong voice for the welfare of its underserved, low-income residents. Most dramatically, he turned a football field into an organic farm, creating easy access to fresh, healthy produce in an urban “food desert” with no supermarket. In Dallas and beyond, Sorrell forged innovative partnerships with businesses, creating jobs and training programs for PQC students and gaining institutional support. This included selling fresh, organic produce from the college’s Pepsico-sponsored farm to the Dallas Cowboys. In this inspiring and highly instructive talk, Sorrell shares stunning examples and practical advice to help any type organization — businesses, schools, colleges, hospitals, health centers or community service organizations — become an anchor institution that mobilizes others as the center of positive change in their community. He also empowers individuals and families to step up, get involved and not wait for others to take action.

According to Michael Sorrell, "If you give a student an 'A' education and then you send them back into an 'F' life, you have not really helped that student. Learning doesn’t occur in a vacuum." Today in America, our educational systems are defined by poverty. The majority of students in higher education depend on Pell Grants and students in public K-12 schools rely on free and reduced lunches for their meals. As our country becomes majority minority, these students no longer look like the legislators who are in charge of funding the educational systems that will prepare these students for the future. In this thought-provoking talk, Michael Sorrell confronts the state of intergenerational poverty in our country and its effect on education and society. Bringing the perspective of a college president serving a population in which 90% of students were raised in poverty, he shares bold and pragmatic solutions. Viewing poverty as an "immigrant experience" Sorrell shares how Paul Quinn College’s Urban Work College Model is helping students migrate out of poverty — and how their success story can serve as an inspiration for our nation.

Teaching Students to Dream Bigger: You Can’t Be It If You Don’t See It

As the president of college in which 90% of the student population has known nothing but poverty, Michael Sorrell knows that, without game-changing interventions, "we become the things we’ve seen." "If you go to an under-resourced high school and you ask the students, 'What do you want to be?'" he says, "the valedictorian may tell you, 'I love science and I want to be a nurse.' Ask the same question at a private high school or one in an affluent public district and you’ll hear, 'I really love science. I want to be a doctor.' It’s not that both kids don’t have the same potential. It’s that one of them has been coached to dream small and one has been encouraged to dream boldly." In this inspiring keynote, Sorrell shares real world stories of lives changed by exposing students to what’s possible. "We must inspire our students to see their potential, dream big and truly believe that it’s not where you start—it’s where you finish."

In 2007, Paul Quinn College was a failing historically black college on a path to shut his doors within 18 months. In 2011, PQC was named the HBCU of the Year. By 2018, PQC had been transformed into one of the most innovative colleges in America with its president, Michael Sorrell, on Fortune’s list of the world’s greatest leaders. In this dynamic keynote that builds upon his breakout SXSW EDU appearance, Sorrell tells the story of PQC, where 90% of students have grown up in poverty. Sharing how values-driven leadership transformed the school from a college to a "We Over Me" movement that pioneered the Urban Work College model, he tells the inspiring story of a college that dared to be great — and reinvented itself with a focus on academic rigor, experiential learning and entrepreneurship. He also provides valuable insights for any organization looking to embark on transformation.

"The WHEF team was thrilled with the keynote presentation and audience engagement that Dr. Sorrell provided during the IMPACT convening. The Mississippi statistics that he lifted and the theme of choosing 'hard, right things' was perfect framing for the launch of this initiative and why equity is important to Woodward Hines. From my initial observations, his remarks provided just the right balance of discomfort for many people in the room to pay closer attention and for others to feel 'seen,' and his authentic offering of his own growth and learning made people appreciate that he is not only a gifted speaker, he is a servant leader."

"Everything went well! He offered a truly exceptional start to the conference and was called 'one of the best speakers in over 10 years' by one attendee. Thanks for your help in locating Michael and getting him onto the platform!"

- Association for the Advancement of Sustainability in Higher Education

"President Sorrell made a spectacular appearance at our event, and we are so grateful for your help in organizing his participation. He gave a phenomenal talk that has caused quite the buzz. We even received an email this morning from an educator who wrote about a difficult conversation with a student and her desire to be a Big 'L' leader in the moment. In a short amount of time, Sorrell managed to inspire so many!"

"We had just under 300 attendees, and they were FLOORED by Dr. Sorrell!! I thoroughly enjoyed Dr. Sorrell's presentation, especially his concrete takeaways, his willingness to be vulnerable and talk about mental health needs. His enthusiasm and encouragement were enlightening. Such great advice for how to live life and love our young people through the examples we set. Really enjoyed Dr. Sorrell's honest, genuine approach to sharing the power of creating changemakers by being an example and taking care of ourselves first. Great message."

"NACAC can’t thank you enough for your inspiring, engaging and just awesome speech. We have gotten such incredible feedback from our attendees." 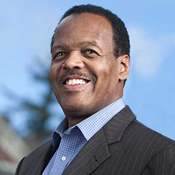