For 30 years, Richard D’Aveni has led the way in adapting management thinking to our increasingly dynamic economy. He is an active commentator on strategic and technological developments and advises major corporations and privately-held enterprises. Besides teaching MBA students, D’Aveni is a frequent contributor to the Harvard Business Review and Forbes. Read More >

As one of the 10 most influential living management thinkers in the world, he is an inspiring and informative keynote speaker who can motivate and captivate an audience. He has consulted with presidents, prime ministers, governors, kings, billionaires, and Global 1000 CEOs. He has delivered hundreds of addresses to audiences of five to 5,000, from board rooms to global forums, including the World Economic Forum’s Annual Summit at Davos, the Young Presidents' Organization, the CIO Forum, the Consumer Electronics Show and the Yale CEO Forum. The Corporate Strategy Board named him one of the (seven) most influential strategy theorists.

D’Aveni has authored 5 books, including Hypercompetition, which coined the phrase and became a global bestseller. He has consistently provided innovative insights into the worlds of strategy and business. His work is credited with creating a new paradigm in the field of strategic management based on temporary advantages, employing rapid and aggressive maneuvering rather than defensive barriers to entry and power over buyers and suppliers. His recent research looks at the perils of commoditization, where he has identified three commodity traps – deterioration, proliferation, and escalation – and provides strategies to escape each trap.

His unique perspective is built on decades of research and reflection on what companies need to thrive into the future. He is particularly effective at creating a sense of urgency for an organization uncertain about its future. D’Aveni holds a Ph.D. from Columbia University and an undergraduate degree from Cornell University, and is a CPA and an attorney. Read Less ^

With industry boundaries collapsing and companies facing threats from every direction, executives can’t afford to be passive – they need to build up their position in the marketplace. D’Aveni’s keynotes provide nitty-gritty insights on potential strategies. He talks about using aggressive market disruption and judo techniques to win against competitors; temporary competitive advantages to re-invent your strategy; counter-revolutionary strategies to buy time against those who have seized the initiative; and joining ecosystems to thrive in the future world of group-based competition.

The digital revolution is coming to manufacturing, where it will be just as transformative as it has been in information services. Richard D’Aveni can speak on 3D printing and other additive technologies that will change not just the factory floor but also supply chains, R&D, and even marketing. Emerging pan-industrial giants will remake the strategic landscape. The rules of competitive strategy are changing once again.

Commoditization – a particularly virulent form of hypercompetition – is destroying markets, disrupting industries, and shuttering long-successful firms. In this important presentation Richard D’Aveni provides a radical new framework for fighting back. Drawing on an in-depth study of 30-plus industries, he recommends first identifying the commoditization trap you’re facing. He describes three: Read More >

D’Aveni provides you with the tools for diagnosing your competitive position and shows how to improve it while also increasing your pricing power – by destroying the commoditization trap confronting you, escaping it, or even turning it to your advantage. Read Less ^

Richard D’Aveni reveals how competitive moves and countermoves escalate with such ferocity today that the traditional sources of competitive advantage can no longer be sustained. To compete in this turbulent environment, D’Aveni argues that a company must fundamentally shift its strategic focus. He shows how firms move up “escalation ladders” as advantage is continually created, eroded, destroyed, and recreated through strategic maneuvering in four arenas of competition. D’Aveni explains how competitors engage in a struggle for control by seeking leadership in the arenas of “price and quality,” “timing and know-how,” “stronghold creation/invasion,” and “deep pockets.” Winners set the pace in each of these four competitive battlegrounds.

Are upstart competitors taking deadly aim at your company’s products and markets? Richard A. D’Aveni presents counter-revolutionary strategies and tactics that any industry leader or established company can use to defend itself against revolutionaries, disrupters, or hypercompetitors. The secret lies in making the rules, not breaking them, D’Aveni says, because rule makers still rule. D’Aveni demonstrates how global powerhouses such as Disney, Microsoft, and Procter & Gamble have achieved preeminence by reconceptualizing their product portfolios as powerful competitive arsenals he calls “spheres of influence.” Essentially a new way to compete by restructuring portfolios around a core geographic/product market, spheres enable any company to influence the behavior and positioning of rivals.

Need to make the right decision about your critical business policy and strategy? Professor D’Aveni can develop a custom-made enterprise and industry-wide discussion that can focus on the crucial areas of innovation, competition, global strategy, business execution, and the dynamics of jockeying for competitive advantage in rapidly changing environments. Call us to discuss how to make this happen.

"D'Aveni rejects formulaic management techniques in favor of a more fluid approach. Once executives realize there are no set rules, they might be more willing to discard conventional ways of thinking. It is a good time to be a maverick, they say, since old ideas have never been as useless as they are in today's business environment."

- The Financial Times of London

"D’Aveni is the Kissinger of corporate strategy. His highly original and imaginative work imports key ideas from the worlds of history and diplomacy to analyze and manage competitors and make decisions much more profitably."

- Author of the bestseller ‘The Profit Zone’

The Pan-Industrial Revolution: How New Manufacturing Titans Will Transform the World

Beating the Commodity Trap: How to Maximize Your Competitive Position and Increase Your Pricing Power 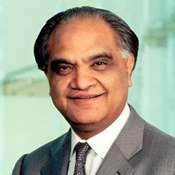