Ari Melber is an Emmy Award-winning journalist, news anchor, writer and attorney. He anchors The Beat with Ari Melber on MSNBC, which draws the largest audience for any 6pm show in MSNBC’s history, and serves as the network’s Chief Legal Correspondent, reporting across all platforms, including MSNBC, NBC News, The Today Show and NBC Nightly News. Melber received a 2016 Emmy Award for his reporting on the Supreme Court. Read More >

On The Beat, Melber reports on news, politics, law and culture, and interviews a deliberately wide range of guests. The show features in-depth interviews with people ranging from newsmakers, like Kamala Harris and Elizabeth Warren, to Trump administration figures Jay Sekulow, Stephen Bannon and Joe Arpaio, to prominent legal experts, such as Eric Holder and Ken Starr, to cultural voices like Alice Walker, Dave Chappelle, Annie Lennox and 50 Cent.

New York Times contributor Peter Wehner credits Melber as “an outstanding interviewer, among the best on television,” while The Detroit Free Press named The Beat to its list of the “best” new TV shows, noting a focus on “untangling” the facts rather than the “partisan posturing of so many” shows. The Hollywood Reporter notes The Beat quickly established itself as a “success” since launching in 2017, adding “there are few cable news hosts more perfectly suited” to covering the legal and political challenges of the Trump era.

As a writer, Melber reported on politics as a national correspondent for The Nation and wrote columns for Reuters and Politico. His articles and essays have also been published by the New York Times, The Washington Post, The Atlantic, The Baltimore Sun and The New York Daily News.

Melber previously practiced law in New York, and received a J.D. from Cornell Law School, where he was an editor of the Cornell Journal of Law and Public Policy. Read Less ^

Legal Issues in The Trump Era

Disruption: How Technology is Revolutionizing Our Politics, Law & Media

A Primer on Public Speaking & Interviewing

Stories From the Frontlines of TV News

"The event went great! Ari was wonderful and our audience loved him. The program funders were quite happy as well, and Ari was gracious enough to talk to them for a few minutes following the talk."

"Ari Melber was great! The talk was great and once the questions got rolling, it was clear that we touched on some deeply important issues to the attendees. Ari was also one of the better keynotes that we’ve worked with in terms of networking with all the attendees and staff before/after his talk."

"Ari was fantastic, very professional and polished. His remarks were on point. Our members enjoyed interacting with him. He did a wonderful job and everyone was pleased. Thank you again for recommending him."

"Mr. Melber’s knowledge of the topic and deft delivery was perfect and successfully impressed upon the audience the importance of the issue. He led the panel with skill and charm that elicited thoughtful, spot-on responses and questions from the audience. Many members of our coalition and audience commented that Mr. Melber was an outstanding panelist."

"In both the written and spoken word, Ari Melber provides thought-provoking analysis of US politics. Invited to give a seminar at the Oxford Internet Institute, his presentation on the political impact of social media was professionally crafted and convincingly delivered, whilst his approachable manner invited comment and debate. Displaying a genuine willingness to engage with the study of politics as well as its practice, Ari is a stimulating speaker who will undoubtedly play a significant role as both analyst and commentator in the forthcoming campaign season."

"After hosting "Ari Melber - A Discussion on New Media with the USC College Democrats," I would highly recommend Mr. Melber as a guest speaker. It was our most packed event of the year. Afterwards, club members came up to me praising the event, and asking why we can't have more guest speakers like him. He was highly engaging, interacting very well with the students in the room, and he really created a discussion rather than a speech or lecture. He brought up issues that we had never thought of as well as elaborated on those that we had! Melber was definitely a hit!"

Is Ari Melber the Future of Cable-News Anchors? 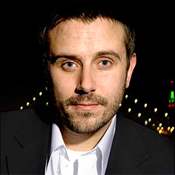