Beverly Johnson is the first African-American Supermodel. Her stunning features would eventually land her on the cover of Vogue magazine in August 1974, making world history as the first black model to ever grace the acclaimed magazine’s cover, and forever changing the beauty ideal in the fashion world. Johnson’s remarkable career, which spans over three decades, is a showcase of accomplishment: from model to mom to actress, author, activist, businesswoman, TV personality, and—finally—Icon. Read More >

Johnson is a Founder, Chairwoman and CEO of BJE LLC. Her “Vision” is to build BJE (aka Beverly Johnson Enterprises) into a multi-billion dollar global brand around The Beverly Johnson Luxurious Lifestyle Brand that represents the “highest quality” luxurious products in Hair, Beauty and Cosmetics (“HBC”) Fashion, and Media to the global Multi-Cultural market for women of all colors.

The Jackie Robinson of modeling, Johnson’s influence truly spans the globe. The New York Times named her as one of the “20th Century’s 100 Most Influential People in the Fashion Industry.” She was featured on the cover of Glamour magazine’s 50th Anniversary issue, the venerable publication that gave Johnson her first break in the 1970s. The late Ruth Whitney, the magazine’s editor-in- chief, proclaimed that Johnson had “broken all color barriers.” In 2008, she received the Thurgood Marshall award for style and innovation, and in 2009, her historic Vogue magazine cover was featured in the “Models as Muse” exhibit at the Costume Institute at the Metropolitan Museum of Art.

As a model in the 1970s, 80s, 90s and the 2000s, Johnson appeared on more than 500 magazine covers from Glamour and Cosmopolitan to Essence, Ebony and French Elle. Her success during the 70s and 80s transcended race, as Johnson became a household name. In 2008, for two seasons Johnson appeared as a judge on the reality show She’s Got the Look. In the March 2012, she launched her constructive reality show, Beverly’s Full House, on the Oprah Winfrey Network (“OWN”). She also penned two books, Beverly Johnson's Guide to a Life of Health and Beauty and True Beauty: Secrets of Radiant Beauty for Women of Every Age and Color. In November 2013, Johnson signed with Simon & Schuster to publish her memoir, which will be published in August 2015.

Throughout her career, Johnson has been active in charity work and speaking out about health issues. In the 1980s, she worked as an AIDS activist and continues to this day to support health issues affecting gay men. During the Clinton era, Johnson was appointed the “Ambassador of Goodwill to the Fashion Industry” to help with the elimination of sweatshops. In 2008, she became the national spokesperson for Ask4Tell4, a campaign that educated women about the options available to treat uterine fibroids, a painful condition that affected Johnson’s life for more than 10 years. Her philanthropic activities include being on the Board of Directors of the Barbara Sinatra Children Center for abused children, as well as being an International spokesperson for the Global Down Syndrome Foundation.

A media mainstay, Beverly Johnson is often called upon to speak about beauty, fashion, style, hair, fitness and health. In February 2014, Macy’s retained her to speak at ten Macy’s stores around the country for Black History Month 2014. Johnson has also been engaged to be the keynote speaker for women groups discussing her role as a Modelprenuer, women empowerment, as well as an advocate for women’s rights and domestic violence. Read Less ^

Discrimination in the Fashion Industry| GMA

My Story of Breaking the Fashion Color Barrier 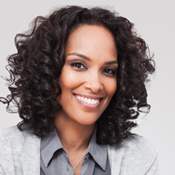