A Program Director and Fellow at the University of Pennsylvania (with several absences) since being named a lecturer in the Political Science Department in 1981. In 1996, named a Fellow in the Political Science Department. In 1997, became a Fellow and in 2003, and founding Director of the Institute for Public Service at the Annenberg school.  Read More >

Lecturer in town halls in 45 states under the auspices of American Program Bureau since 1986. For ten years, a special lecturer for a month each spring aboard spring cruises through the Celtic Lands and Normandy organized by Gohagan Travel.

Mr. Eisenhower sits and or has sat on numerous non- profit boards and advisory commissions. Named Fellow of the American Society of Historians, New York City in 1991. Past Chairman of the Eisenhower Presidential Foundation and former member of Eisenhower memorial Commission (Presidential appointment).

Recipient of eight honorary degrees, the Golden Slipper Award for community service in Philadelphia, admitted to Golden Key Society membership, awarded the Panitt Award for Citizenship by the Annenberg School, University of Pennsylvania, 2002, and the Eisenhower Medal for distinguished service by the Eisenhower Exchange Fellowships, 2018.

Former US Naval Officer (1970-1973). Former syndicated sports columnist for the Philadelphia Bulletin and front office employee for the (past) Washington Senators. He is a graduate of Phillips Exeter Academy (1966), Amherst College, and George Washington University Law School (1976). Read Less ^

The Historical Context of Recent Presidencies

"Julie and David Eisenhower were FABULOUS!!!! They were without a doubt our very best program and everyone loved them. We would love to have them again soon. You should for sure recommend them to everyone, all your clients will be very pleased."

"David Eisenhower was wonderful. His enormous knowledge of World War II and his grandfather was extraordinary. In addition, he was completely gracious. The Institute greatly enjoyed having him as our distinguished speaker."

"The event was wonderful! David and Julie were so great—so personable and friendly and gracious—and exceeded our expectations in every way. It seems like they went out of their way to introduce themselves to as many people as possible at the reception. The presentation was very interesting and entertaining as well. Topping the Eisenhowers will be a very difficult task indeed."

"David was phenomenal! He had the crowd completely captivated and everyone was thrilled when he stuck around to chat with attendees. David, yourself, and your colleagues were all great to work with."

"Last night’s ADL Torch of Liberty event was a success! He was fantastic! Not only is he kind, smart and very personable but he did a tremendous job tying ADL into his remarks. Amazing!!" 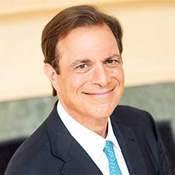