Co-host of the syndicated talk show, The Real, and former host of the Style Network’s Emmy-nominated show How Do I Look?, Jeannie Mai is a popular television personality, fashionista, makeup artist, and inspirational speaker. With over a decade of experience empowering women through the power of femininity both onscreen and off, Mai’s mission in life is to help women realize their full potential. Read More >

On How Do I Look?, a fashion intervention show, Mai empowered women to discover their true beauty, overcome their insecurities, and employ fashion to give them the confidence they need to help achieve their career goals. Before gaining national recognition for her colorful fashion sense and exuberant personality, she was a celebrity makeup artist and stylist from San Jose, Calif. She is currently a co-host of the syndicated talk show, The Real, alongside Adrienne Houghton, Loni Love, Tamera Mowry-Housley, and Tamar Braxton (former co-host for seasons 1 & 2), which premiered on July 15, 2013.

Mai thanks her mother for teaching her the connection between pride in your appearance and personal success as early as her first day of school. She believes that the relationship between mother and daughter is one of the most important in life, and shared her story in the popular book series Chicken Soup for the Soul. Today, she appears as a frequent fashion correspondent on programs such as The Today Show and E! News and serves as a style expert for Perez Hilton’s hit fashion website, CocoPerez.com, which brings in over nine million unique visitors per month.

As a major advocate for women’s empowerment, Mai receives rave reviews wherever she speaks. Most recently she spoke at Maria Shriver’s The Women’s Conference immediately following other notable talent such as Donna Karan, Jessica Simpson, and Jane Fonda. Due to her commitment to teaching women the power of wardrobe, she is an active supporter of charitable causes from Seven Bar to Dress for Success and frequently hosts events like Hope in the City: Creating Fashion to Spark Creativity. In addition to honoring women as the emcee of the 2010 Women in Telecommunications (WICT) LEA Awards, Mai also uses her recognition as a fashionista as a platform to promote fledgling female designers and entrepreneurs from around the world by wearing their designs on air and on the red carpet.

In addition to her flair for fashion, Mai is a passionate foodie who is on a constant search to find the world’s most delicious meals. Through her website, IHeartJeannieMai.com, she documents her culinary adventures and opinions through colorful video blogs for her fans, along with her own column in Food and Wine Magazine in 2011.

Of Vietnamese and Chinese descent, Mai is proud of her heritage and strives to give back to her community. She is an active member of the Asian Professional Exchange (APEX), inspiring young Asian Americans to succeed in their careers by hosting events such as its awards gala (honoring Lisa Ling) and its Career Symposium for young professionals. Mai also frequently travels to Asia to volunteer her time to inspiring organizations dedicated to fighting epidemics such as congenital heart disease and human trafficking. She works with Heartbeat Vietnam, a nonprofit devoted to improving healthcare for impoverished children, and was able to travel to the country to be present when a six-year-old girl she supported received a new heart. In Thailand, Mai works with NightLight International, an organization committed to rescuing women and children from prostitution rings by providing employment and vocational opportunities. While in the United States, she has served as the keynote speaker at events such as the Freedom & Fashion Runway Show, which raises awareness to fight human trafficking, and the Susan G. Komen/Diane von Furstenberg gala to combat breast cancer. In 2011, she hosted the Go Red for Women Luncheon in Charlotte, N.C., to raise funds to battle heart disease.

Deeply spiritual, Mai attributes her faith to the success she has achieved. She and her husband Freddy share hilarious stories about how they discovered the power of love languages and have grown to respect and honor each other in their marriage. She attributes her commitment to celibacy as a major factor in building a healthy relationship with her husband and shares her story at events such as RespectRX, which celebrates those that practice celibacy before marriage. Mai believes firmly in the power of “praying it forward” and tries to motivate others to give back to their community. She takes great pride in the Prayer Box she created and placed in Runyon Canyon in Los Angeles. Hikers are asked to leave a personal prayer and take another that has been left in the box. The box encourages visitors to open their eyes to the prayers of others and share their own as an expression of faith, hope, and love. The box has now become a popular destination for both residents and tourists. Read Less ^

The Power of Fashion, In Life & At Work

Jeannie Mai’s main goal in all she does it helping others reach their potential. Oftentimes she sees that people are held back by fashion, especially in their careers. For this reason, she strives to educate women and men on how they can empower themselves through their wardrobe and dress for the career they want, not the career they have. In this inspiring speech, Mai—a board member for Dress for Success—shares unique situations from her show on Style Network, How Do I Look?, to describe the power of fashion in leading a successful life, urging audiences to harness that power in their own careers.

Career: Finding It & Building It

As a self-made television personality and spokesperson, keynote speaker Jeannie Mai discovered her natural joy to motivate others and celebrate people's passions at a young age. Realizing the need for a bigger movement to create confidence within women, Mai travels the globe to share her rmotivational message with students, mothers, and women in transition. In this talk, she will help audiences not only identify their passion, but also guide them in how to make the right moves to achieve their career goals.

Healthy Diet & Lifestyle: Health speaker Jeannie Mai had a history in which she suffered from eczema, abnormal sleep patterns, difficulty focusing, and constant weight gain. At age 24 she learned that she was celiac deficient (allergic to gluten). With a new perspective on the way Americans eat, Mai shares her tips for healthier living with audiences across the country who are looking to be happier, healthier, and more energetic.

Heart Health: Heart health is a subject near and dear to speaker Jeannie Mai. She actively supports Heartbeat Vietnam, an organization that brings mobile hospitals to rural villages to provide heart examinations and transplants, and in 2010 she and her husband financially supported a six-year-old girl, Be Ha, who was in need of a heart transplant. When it was time for Be Ha to receive her new heart, Mai traveled to Vietnam to be there for her surgery and watched her take her first steps after. Home in the United States, she actively supports organizations fighting heart disease. In her heart health speeches, she combines her upbeat delivery with personal stories of hope and triumph. Read Less ^

Jeannie Mai firmly believes femininity is the most powerful quality a woman can have in the world. From teaching women to take an appreciating look at the way they speak, move, walk, think, and react to embracing all the situations in life that have brought them to become the woman they are now, Mai strives to makes every woman feel worthy. In this talk, she shares personal situations that taught her to change her perspectives to become more influential and powerful, and also humbling moments in life that has become the foundation for the woman she has become.

Asian American speaker Jeannie Mai tries to be a positive role model for the community whenever possible. Instilled with values from her heritage, she understands what it is like to sometimes feel like an outsider in American culture. Excited to be part of a world where diversity is becoming more widespread and celebrated in the workforce, she is an active supporter of the Asian Professional Exchange (APEX), which brings together Asian American professions to encourage and empower them to reach their dreams. In this inspiring speech, she outlines her personal success story, encouraging Asian Americans to pursue their dreams and celebrate their heritage.

Keynote speaker Jeannie Mai fully attributes her focus and success in life to the principles she's learned through her faith. As a liberal Christian, she shares an open-minded perspective on the biblical values practiced in today's world. Mai—who does not take an evangelical stance on any specific denomination—draws upon her actions and everyday choices in this speech, intimately sharing why, after certain experiences and realizations, she has chosen the faith that guides her today. 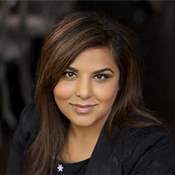