World-renowned as a voice for human rights, New York Times bestselling author and former White House and National Security Council official John Prendergast has attracted Hollywood’s A-List to focus the world’s attention on genocide, corruption and the hope for peace in Africa. Working in countries such as the DR Congo, Sudan, South Sudan and Somalia for more than 35 years, John is the Founding Director of the Enough Project, an initiative to end genocide and crimes against humanity. He and George Clooney partnered to co-found the Sentry, an investigative initiative chasing the assets of African war criminals and their international collaborators. John serves as The Sentry’s Executive Director, with board members that that include Clooney, Matt Damon, Don Cheadle and Brad Pitt. His latest book, Congo Stories: Battling Five Centuries of Exploitation and Greed, co-authored with Congolese activist Fidel Bafilemba, features Ryan Gosling’s stunning photography of Congolese daily life. In addition to his work on the world stage, John has been a big brother in the Big Brothers/Big Sisters program for 35 years to a number of boys, as well as a youth counselor and basketball coach. Read More >

With Congo Stories, John is the author or co-author of eleven books, most notably the New York Times bestseller, Not On Our Watch, co-authored with Don Cheadle. He also teamed with Cheadle for The Enough Moment: Fighting to End Africa's Worst Human Rights Crimes. John also wrote about his experience in the Big Brothers/Big Sisters program in Unlikely Brothers, a dual memoir co-authored with his first “little brother.” John has appeared in several documentaries including: Merci Congo, When Elephants Fight, Blood in the Mobile, Sand and Sorrow, Darfur Now, 3 Points, Son of South Sudan, and War Child. He also co-produced, with Martin Sheen, the documentary After Kony: Staging Hope, which focuses on Northern Uganda. John partnered with Downtown Records and Mercer Street Records to create the compilation album Raise Hope for Congo, combating sexual violence against women and girls in Congo. He also appeared in the Warner Brothers' motion picture The Good Lie, starring Reese Witherspoon.

Under the Enough Project umbrella, John has helped create a number of initiatives and campaigns. With George Clooney, he co-founded the Satellite Sentinel Project, which aimed to prevent conflict and human rights abuses through satellite imagery. With Tracy McGrady and other NBA stars, John founded the Darfur Dream Team Sister Schools Program to fund schools in Darfurian refugee camps and create partnerships with schools in the United States. Through the Enough Project, he launched the Raise Hope for Congo Campaign, highlighting the issue of conflict minerals that fuel the war there and supporting a more comprehensive peace process, and its companion Conflict-Free Campus Initiative. He also co-founded the Sudan Now campaign, which supported the holding of a peaceful independence referendum for South Sudan in 2010.

John has worked for the Clinton White House, the State Department, two members of Congress, the National Intelligence Council, UNICEF, Human Rights Watch, the International Crisis Group, and the U.S. Institute of Peace.  During his time in government, he was part of the facilitation team behind the successful two-year mediation led by Anthony Lake which ended the 1998-2000 war between Ethiopia and Eritrea, the deadliest war in the world at the time. He was also part of peace processes for Burundi (led by President Nelson Mandela), Sudan (led by Lazaro Sumbeiywo) and DR Congo. He is or has been a visiting professor at Stanford University, Yale Law School, Columbia University, Dartmouth College, Duke University, Claremont McKenna College, Kean University, American University, and American University in Cairo, the University of San Diego, the University of Pittsburgh, Temple University, Albright College, St. Mary's College, the University of Massachusetts, and Eckerd College. He has been awarded seven honorary doctorates.

The Astonishing Story of Congo's Connections to America, & You

For five centuries, Americans and Europeans have benefited enormously from the exploitation of the people and natural resources of a country in the heart of Africa: the Democratic Republic of the Congo. In this illuminating talk, drawn from his latest book and brought to life by photos by Ryan Gosling, Prendergast captures this astonishing history. He also shares how the people of Congo are risking their lives fighting back, supported by human rights movements led by young people in the U.S. and Europe. Blending 500 years of history with the headlines of today, Prendergast demonstrates that because of these brave change-makers, the way the world deals with Congo is finally changing.

Perhaps more than any other factor, war has driven and shaped human history. Superficially, many wars seem to have had no clear rationale or identifiable cause. Scratch beneath the surface, however, and there is one common denominator: unchecked greed. War may be hell for the people, but it is very profitable and politically beneficial for a small group of opportunists. John Prendergast illustrates this by focusing on the region of the world that he has spent the better part of the last 35 years working on: East and Central Africa. Together, Sudan, South Sudan and Congo have become the deadliest global war zone since World War II. When combined with genocide in Rwanda, Darfur, and the Nuba Mountains, the death toll amounts to over ten million in the last three decades alone. Prendergast chronicles this tragic history and what it means to the future of these tragically war-torn nations.

John Prendergast has pursued two paths to making an impact: locally, as a mentor and "Big Brother" to kids with absent fathers, and globally, as a human rights in Africa. In this inspiring talk Prendergast tells how he stumbled onto both of these paths as a young adult. He also shares ten building blocks that have contributed to three decades of making a difference. Along the way, Prendergast intersperse personal and inspirational stories of driving change in Africa, along with his work with celebrities such as George Clooney, Ryan Gosling, Robin Wright and Don Cheadle.

From the Holocaust to Modern Genocides & the Anti-Atrocities Movement

From the Holocaust to Rwanda and Darfur, genocide has one tragic commonality: the targeting of people on the basis of identity. John Prendergast examines genocide and its impact on the Jewish, Rwandan, Darfuri and other targeted peoples. He looks at the similarities and differences between contemporary genocides and the Holocaust, and how genocidal tactics have evolved since the Holocaust. He also highlights the growing people's movement to fight the causes of genocide, ethnic cleansing and atrocities. Calling these movements the greatest hope to prevent and end the greatest of human tragedies, Prendergast explores how the world’s response has changed since the Holocaust—and what we all can do to prevent it from ever happening again.

"Thank you so much for everything you did to secure John for our event last night. He really was just a delight and his talk was extremely engaging. The feedback has been so great from what I am hearing and John was incredibly generous with his time after the event speaking with audience members. I can't thank you enough, as I really would not have known where to turn for a speaker. I hope that we can continue to work together on this event in the future."

"On behalf of the Manitoba Dental Foundation, the time you spent with us (students of the Global College and the attendees at the Dare to Smile Gala) was remarkably inspiring, meaningful and an important 'call to action' locally and globally. I sincerely hope our paths cross again soon and often. Moreover, we wish you continued success in your pursuit of peace and social justice!"

"Truly a great experience. John made a direct connection to students and wowed our sponsors. I stayed with him for over an hour after the evening event as he took time to meet with every student who approached. Personally, I found him a wonderful and engaging man."

"Addressing current issues in contemporary Africa, John Prendergast spoke to an audience of approximately 400 students, faculty, and lifelong learners at the University of Utah. His humanity and passionate intensity to make Africa a better place were immediately evident. His command over the audience was sure and listeners followed him closely. At the evening event for 250 campus and community members, John again shared his story, detailing his personal introduction to human rights activism, punctuated by humor and spirited anecdotes. He stayed an hour after the event to connect with every student who approached him. Few of our speakers have ever shown this kind of interest and courtesy. Several students remarked that his visit was a transformative event in their lives. It was truly a pleasure to host him."

"John was a huge hit! He is a very stylish and charming fellow with an excellent speaking style. His talk is full of content and passion for his topic. His Q&A was excellent. People had a lot of good questions. After the talk, and determining that he was single, two different people asked him to marry their 43 year old, beautiful, intelligent, single daughters. That's a first for me as program chair, but likely something he hears along the way. It was pretty funny. He took it in good humor. (One Dad was serious. His daughter does similar work in Israel and Palestine). Thank you for your help."

Unlikely Brothers: Our Story of Adventure, Loss, and Redemption

Not on Our Watch: The Mission to End Genocide in Darfur and Beyond 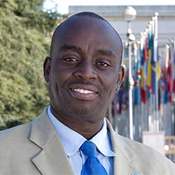