Author, The Death of Vishnu

Manil Suri was born in Bombay and is now a professor of mathematics and affiliate professor of Asian studies at the University of Maryland, Baltimore County. His first novel, The Death of Vishnu, won the 2002 Barnes and Noble Discover Prize and was a finalist for the 2002 Pen-Faulkner Award. His second novel, The Age of Shiva, was listed as one of the best 25 books of the decade by Contemporary Literature. Read More >

His third novel, The City of Devi, was released in 2013 and has already been listed as #12 in Flavorwire’s “50 Essential Works on LGBT Fiction.” He was named by Time Magazine as a “Person to Watch” in 2000 and received a Guggenheim Fellowship for fiction in 2004. His fiction has been translated into 27 foreign languages, and has appeared in The New Yorker.

In addition to his writing, Manil Suri is involved in several mathematics outreach projects. His research is in the area of finite element methods for partial differential equations. Read Less ^

India is one of the richest and most diverse cultures in the world, one where mythology, religion, history, politics and even movies seamlessly run into each other. Suri talks about the challenge of capturing the essence of this complex and multilayered society through his trilogy of novels.

The Diverse Worlds We Inhabit

Suri talks about the different worlds he has inhabited (and continues to inhabit), and the sense of identity he derives from each of them: India and America, arts and science, [could add “gay and straight,”] writer and mathematician.

The Mathematics of Fiction

Suri talks about the experience of being both a novelist and a mathematician, and the synergy generated between the two endeavors for him. He takes the audience on a multimedia journey into a fascinating world where these two fields intersect.

The City of Devi 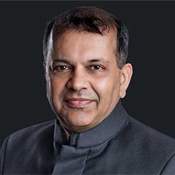