Melissa Murray knows the transformational power of women’s rights and gender justice. As a leading scholar of constitutional law and reproductive rights and justice, she researches and writes about the structures, systems, and institutions that allow women to thrive—as well as those that stymie and limit women’s ambitions for themselves and their families. Read More >

The daughter of Jamaican immigrants, Melissa knows first-hand the importance of securing and expanding opportunities for women. She was just six years old when she realized that her literacy skills outstripped her grandmother’s. But even as Melissa recognized her grandmother’s limitations, she also saw her dogged determination to ensure that her daughters—and granddaughters—would have more opportunities. Raising chickens, selling eggs, and doing other home-based labor, Melissa’s grandmother made sure that all five of her daughters, including Melissa’s mother, completed high school and went on to have careers. With these powerful models of grit and determination, it is no wonder that Melissa went on to be one of the nation’s leading experts on women’s rights, reproductive rights and justice, and the United States Supreme Court.

The co-host of the popular Supreme Court podcast, Strict Scrutiny, and a legal analyst for MSNBC, Melissa’s talks explore the intersection of gender, race, and the law, and examines the role of legal institutions, including the Supreme Court, in entrenching and disrupting inequalities. An engaging and commanding speaker, Melissa challenges audiences to understand the ways in which gendered roles and expectations have long permeated—and continue to permeate—all aspects of our society, stymieing opportunities for gender justice, reproductive justice, and a more equal society.

Murray is the Frederick I. and Grace Stokes Professor of Law at the New York University School of Law, and Faculty Director of the Birnbaum Women’s Leadership Network. Previously, she was the Alexander F. and May T. Morrison Professor of Law and Interim Dean of Berkeley Law, the first Black woman to lead a top ten law school. Murray’s articles have appeared in leading law journals, including the Harvard Law Review, the Yale Law Journal, and the Columbia Law Review. Murray regularly appears in print and on television to comment on critical political and policy issues. She is a graduate of Yale Law School, where she was a member of the Yale Law Journal, and the University of Virginia, where she was a Jefferson Scholar and an Echols Scholar. Prior to entering academia, she served as a law clerk to the Hon. Sonia Sotomayor and the Hon. Stefan R. Underhill.

Her moving talks make clear the real-life stakes of our most pressing legal and political issues—for women and everyone else. Read Less ^

She the People: Reading Women into the Constitution

Sex & the Supreme Court: How the High Court Shapes & Defines Our Intimate Lives

Legal Issues in The Trump Era . . . and Beyond

"I think you did an absolutely amazing job. The history lesson was really informative and I learned so much. The tone of the overall presentation was so respectful and accommodating of different perspectives and opinions while still delivering the content that we in DEI were looking for. You did such an excellent job of catching all of the topics that needed to be covered in the Q&A session and your close-out was just lovely. Thank you so much for leading us through this incredibly charged and complex topic. I don’t think that could have gone any better."

"Wanted to share my sincerest THANK YOU. Since stepping off the meeting, I’ve received numerous chats and calls from individuals expressing how the conversation moved them, gave them goosebumps, allowed them to learn something, and others truly touting the talent on this call." 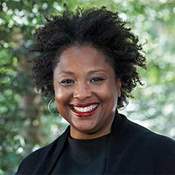