Mike Leavitt is the founder of Leavitt Partners where he helps clients navigate the future as they transition to new and better models of care. In previous roles, Mike served in the Cabinet of President George W. Bush (as Administrator of the Environmental Protection Agency and Secretary of Health and Human Services) and as a three-time elected governor of Utah. Read More >

Mike grew up in Cedar City, Utah, where his upbringing was rooted in the values of the American West, with its emphasis on hard work and common sense. He earned a bachelor’s degree in business while working in the insurance industry. In 1984, he became chief executive of The Leavitt Group, a family business that is now the nation’s second largest, privately held insurance brokerage.

He led the implementation of the Medicare Part D Prescription Drug Program. The task required the design, systematization, and implementation of a plan to provide 43 million seniors with a new prescription drug benefit. By the end of the first year, enrollments exceeded projections, prices were lower than projected, and seniors expressed high levels of satisfaction.

Mike’s strategic ability can be seen in his redesign of the nation’s system of quality and safety standards for imported goods. In the spring of 2006, President Bush assigned him to lead a government-wide response. Within months, he commended a major strategic shift in U.S. policy on import regulation and trade.

A pattern of innovation runs throughout Mike’s career. When he was elected governor, Utah’s major freeway system was dangerously inadequate. Taking what some thought was a significant political and financial risk, Mike instigated a design-build system, creating cost and quality incentives between the state and its contractors. The project was finished in half the originally projected time and well under budget.

Mike is, at heart, an entrepreneur. As governor, he organized a group of his colleagues to form Western Governors University. At WGU, degrees are earned based on competency rather than credit hours. WGU now has more than 60,000 students who reside in each of the 50 states and several foreign countries. Enrollment is growing at 35 percent a year. In November 2008, TIME magazine named WGU “the best relatively cheap university you’ve never heard of.”

Collaborator is a word that comes up repeatedly when one examines Mike’s background. His skill led his colleague governors to elect him as chairman of the National Governors Association, the Republican Governors Association and Western Governors’ Association. His book—Finding Allies, Building Alliances—was released in September 2013 by Jossey-Bass Publishers and chronicles his expertise and passion for collaboration.

Mike is a seasoned diplomat, leading U.S. delegations to more than 50 countries. He has conducted negotiations on matters related to health, the environment, and trade. At the conclusion of his service, the Chinese government awarded him the China Public Health Award – the first time this award has ever been given to a foreign government official. Read Less ^

Value vs. Volume in Healthcare

The Economics of Goodness

Focus on the Big Gears

The Future of Healthcare

How do we find collaborative solutions to the greatest challenges? Your business challenges extend far beyond you and your organization, to the competitors within your industry and the regulators outside it. Finding solutions to larger issues requires cooperation between diverse stakeholders, and in this rapidly changing world, only those able to adapt and network successfully will produce fast, competitive solutions. How can leaders successfully bridge divides and turn competitors into collaborators? Leavitt explains how a well-chosen network can become a powerful alliance. Whether you're launching a new partnership, or rehabilitating one already in progress, he will show how you can find workable solutions to the most complex problems.

The Evolving Politics of Health Care

In the wake the fierce health care debate in Congress, there has been a deep voter concern with health care. Political changes have breathed new energy into the national conversation about what role government should play in health coverage and financing. Policy makers are moving in different directions – some moving to advance sweeping public payer changes which would increase private sector risk, while others are focused on expanding delivery system reform and value-based care. Our federal and state experts provide insight into the latest movements in Congress, CMS, CMMI and states; what the policy environment means for the way care is paid for and delivered; and how industry leaders can thrive amid uncertainty.

The State of Value in the Evolving Health Care Landscape

The pace of change in the health care marketplace can feel both rapid and painfully slow as policy makers and health care stakeholders seek new strategies to address our most pressing cost, quality and access challenges. At Leavitt Partners we have a framework for this: we believe the U.S. is about 25 years into a 40-year transformation to a uniquely American, value-driven health care system. This journey is characterized by periods of rapid change, and experimentation, as well as understandable setbacks. Our experts and thought leaders bring data-driven insight to help audiences understand current delivery system transformation trends, the growth of value-based payment arrangements, barriers and challenges, and how organizations can thrive in the evolving health care landscape.

From the front line to the executive office, those who wish to get ahead of the curve of change need to lead, question assumptions and be realistic. Leavitt shares how very few changes can be made unilaterally and individual leadership may be the fuel of positive change, but it is ultimately the ability to work collaboratively that makes the engine purr. "You can fight change and lose. You can accept change and survive. Or you can lead change and prosper." In a world that is constantly changing, Leavitt brings a national and global perspective to the topic of leadership as the critical ingredient to success in a rapidly changing world. 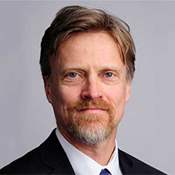