Former President of the Republic of Georgia

Nominated for the Nobel Peace Prize by John McCain and Hillary Clinton, Mikheil Saakashvili was the President of Georgia from 2004 to 2013. After the peaceful Rose Revolution of 2003, he became Europe’s youngest head of state—and set out charting a new course for Georgia. During his time as President of Georgia, Saakashvili was vilified by Vladimir Putin and won the admiration of the West. Commenting upon Saakashvili leaving office, President Obama said, “You are leaving a great legacy of democracy and a reformed Georgia.” Read More >

President Saakashvili quickly gained global recognition for his historic anti-corruption initiatives that transformed Georgia, leading the World Bank to name the country the top reformer in the world. Before Saakashvili’s presidency, Georgia ranked 100th on the authoritative “Doing Business” report. By 2006, Georgia ranked 37th, and soon moved up to the top 20.

Georgia’s path to the West drew the ire of Russian President Vladimir Putin, who has always viewed Georgia and other former Soviet republics as Russia’s exclusive zone of influence. In 2008, Russia invaded Georgia, and Saakashvili emerged as Putin’s enemy number one.

Despite the unimaginable damage done by the war—and the Russian occupation of 20 percent of Georgian territory—Saakashvili continued to drive reforms that spurred economic growth. Ultimately, he dismantled the Soviet legacy in Georgia, and built in its place a pro-Western democracy.

Since leaving office at the end of his second term in 2013, President Saakashvili has remained a leading advocate for closer ties between Eastern Europe and the West. He participated in Ukraine’s Maidan Revolution and invited John McCain to address the protests alongside him in December 2013. In 2014, President Saakashvili served as the first Senior Statesman in Residence at the prestigious Fletcher School of Law and Diplomacy at Tufts University. In this role, President Saakashvili conducted major addresses and lectures on European governance and other contemporary international and regional issues.

After the revolution in Ukraine, President Saakashvili was invited to advise the new Ukrainian government as Ukraine sought closer ties with the West. From 2015 to 2016, President Saakashvili served as the Governor of Ukraine's Odessa region, where he led ambitious efforts to reform the customs system and combat organized crime.

Currently, he is a political opposition leader and anti-corruption advocate. President Saakashvili is frequently invited to discuss Russia, Putin, and other timely political issues on U.S.

and international television, including MSNBC, France 24, Al Jazeera, and BBC. Because of his close friendship with John McCain, President Saakashvili was recently invited to comment on McCain’s legacy for CNN, NPR, Fox News, and other outlets.

History is often made in remote and obscure places. When Russia invaded Georgia in 2008, the small country was at the front line of the free world. And the stakes could not have been higher. To bring Georgia back into the Russian orbit, Vladimir Putin sought to topple pro-Western President Mikheil Saakashvili and derail Georgia’s progress toward democracy. Against all odds, President Saakashvili defied Putin’s power grab and won re-election later that year. Read More >

Throughout his second term, President Saakashvili continued to pursue closer ties with the U.S. and EU despite constant threats from Russia. But Putin never gave up his ambitions: A Kremlin-backed disinformation campaign targeted President Saakashvili in Georgia’s 2012 elections—foreshadowing Russian interference in the 2016 U.S. presidential election.

President Saakashvili has met Putin more than thirty times, been the target of Russian-backed assassination attempts, and continues to be Putin’s “enemy number one.” As the only person to hold leadership positions in both Georgia and Ukraine, two countries that have borne the brunt of Russia’s aggression, President Saakashvili offers a unique first-hand perspective on Putin’s regime. By illuminating Putin’s goals, tactics, and influence, President Saakashvili helps all of us understand the grave threats to democracy posed by Putin’s regime—and how we can defend against them to secure a brighter future for the world. Read Less ^

In the 1990s, torn apart by civil war and facing economic collapse, the Republic of Georgia was a failed state. Political corruption was systemic, elections were rigged, and most of the country lived without electricity. But after President Mikheil Saakashvili came to power in the peaceful Rose Revolution of 2003, Georgia emerged as a remarkable—and improbable—success story. Read More >

As Europe’s youngest head of state, President Saakashvili spearheaded ambitious reforms that transformed his country’s economy, government, and role in the world. He began by firing half of Georgia’s police force for corruption, which had been endemic before the revolution. With the support of the international community, President Saakashvili reformed Georgian law enforcement by replacing nepotism with meritocracy, and bribery with fair salaries. Consequently, Georgia—which had been one of the world’s most dangerous countries—became one of the safest.

As President Saakashvili introduced diverse initiatives from renewable energy to e-governance, Georgia gained recognition as one of the most innovative countries in the world. The World Bank named Georgia a top reformer three years in a row, and Georgia jumped from the bottom to the top of Transparency International’s Corruption Perceptions Index. Tourism and foreign investment boomed. President Saakashvili’s story of Georgia’s transformation inspires us to believe in the human capacity to succeed—even in the most challenging circumstances imaginable. Read Less ^ 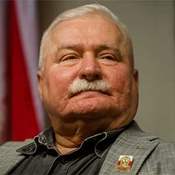