When Morgan Stickney was fourteen, she was an elite distance swimmer who was possibly headed to the Olympics, until she sustained a foot injury that forever altered her athletic career. Read More >

By the time she was wheeled into surgery, her Olympic dream had long since vanished. A relatively minor foot injury in 2013 had dragged her down a rabbit hole of numerous examinations and untold theories, none of which relieved — or even explained — the constant, excruciating pain that left her unable to walk by day and then, cruelly, stabbed her awake at night. The injury led Stickney to endure years of debilitating pain, facing five surgeries over several years and resulting in a dependence on painkillers. Despite many attempts to save her legs, Stickney ended up having both of her legs amputated.

The amputation procedure she received was designed to enhance the vitality of the portion of the limb that remained. Those possibilities could include the potential of one day connecting the lower leg muscles to a futuristic robotic prosthesis currently in development at the Massachusetts Institute of Technology. The developers of the prosthetic hope it will operate much like a natural ankle and foot.

Stickney has gone from athlete to para-athlete, and has set her sights on the Paralympics, powering her body through the pool with two prosthetic legs. She is also part of a small but growing group of pioneers ushering in the next generation of prosthetics. The journey, though, has not been easy.

“Nothing will stop me from getting in the pool,” Stickney said. “My goal is to go to the 2024 Paralympic Games. I'll be in a different classification this time, but that doesn't change anything. Whether I'm going to be working just as hard in the pool, if not harder.” Read Less ^

A Conversation with Morgan Stickney 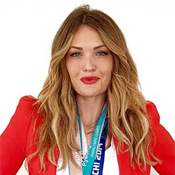