Nick Santonastasso is a medical miracle. Not only is he one of four people with the rare genetic condition, Hanhart Syndrome, the inspirational keynote speaker is an internationally known bodybuilder and ﬁtness model —despite missing both his legs and one arm since birth. Read More >

Nick did the unthinkable when he became a varsity wrestler in high school. At the same time, he rose to Vine stardom, sharing his life and thoughts on acceptance, positivity, and pushing your limits with millions, gaining the admiration of A-list celebrities, Dwayne “The Rock” Johnson, Tony Robbins, and Ed Mylett. A powerful keynote speaker, Nick’s passion for helping others shines through as he takes his message to schools, universities, and Fortune 500’s. Read Less ^

This Is The ONLY Way to Become Stronger | Goalcast

Victim to Victor: Annihilate Excuses to Effortlessly Dominate Your Goals

Never say you can’t, ask how you can. With this in mind, Nick Santonastasso provides audiences with strategies, frameworks, tools and systems from the top achievers in the world. He teaches professionals how to be better leaders and perform at their optimal level by annihilating excuses and becoming victors of their own life.  Read More >

In this power-packed talk, Nick shares his step-by-step approach to become a better leader, gain more confidence, improve your finances, improve your health, and find out your true life purpose to have fulfillment and make more of an impact. Read Less ^

“It’s impossible to hear Nick Santonastasso speak and not be inspired by the determination and excellence he approaches life with.”

“In his mind there’s nothing he can’t do...and he’s right. He’s right because he does everything he sets his mind to.”

"Nick exemplifies max out life to the fullest! His story is truly special and inspirational. I would go anywhere in the world to hear him speak." 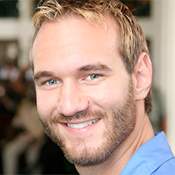