Rudy Maxa is one of America’s premier consumer travel experts whose writings and radio and television shows have helped save thousands of travelers both time and money. A former Washington Post investigative reporter and life-long traveler, Maxa began covering the travel industry 20 years ago for public radio’s evening business show, “Marketplace,” where his commentaries under his moniker, “The Savvy Traveler,” were heard by millions of listeners. Read More >

His “Marketplace” appearances led to the creation of a one-hour, weekend radio magazine show, “The Savvy Traveler,” that Maxa co-created and hosted from its inception in 1997 until the summer of 2001.

Maxa’s travel articles have also appeared in the Washington Post, Forbes, GQ, Travel & Leisure, the Los Angeles Times, Ocean Drive, Self, WORTH and dozens of other major publications around the world. He has written regular, weekly columns for ABCNews.com, American Express’ web site and MSNBC.com. And he’s a frequent guest on CNN, CNBC, MSNBC, CNNfn, Fox News Channel, The View, The World and other radio and television shows.

A journalist by training, Maxa was a columnist and reporter for 13 years with the Washington Post, a senior writer and columnist for nine years with Washingtonian magazine, and Washington bureau chief of SPY for two years. He is the author of two non-fiction books and lectures frequently on travel. A member of the Writer’s Guild of America, Maxa has written dramatic scripts for the ABC-TV series Capitol News. He hosted for several years a four-hour, Saturday morning talk show on the NBC owned-and-operated station in Washington, WRC-AM.

Rudy Maxa is a graduate of Ohio University’s School of Journalism, from whom he received the L.J. Hortin Distinguished Alumnus Award. Read Less ^

Tales of a Travel Journalist

"The event was a huge success and Rudy was just perfect. He was enjoyed by all of our conference guests and he really hit it out of the park for us. He was the first keynote who kicked off the event for us and we could not be happier! Thanks much for the recommendation!"

"Public radio listeners have long profited from Rudy Maxa's superb travel advice. Trust him if you want to travel in style for less while minimizing hassles on the road."

"The event was a success. We had 255 participants. Rudy was great." 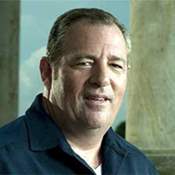