The multitalented Vicki Lawrence has been a star since the day she was voted “Most Likely to Succeed” by her graduating class at Morningside High School in Inglewood, California. From 1965-1967, Lawrence sang with the Young American’s musical group and also appeared in the feature film The Young Americans, which won an Academy Award for Best Documentary. Her show-biz career took off when, during her senior year in high school, she sent Carol Burnett a letter including a local newspaper article mentioning their resemblance. Lawrence invited Burnett to the local fire department’s “Miss Fireball Contest” where she was performing. Burnett, looking for an actress to play her kid sister on her new variety series, contacted Lawrence and made arrangements to come to the event. The rest is television history. The Carol Burnett Show premiered in 1967 and ran for 11 years, during which time Lawrence earned one Emmy Award and five Emmy nominations. After the show ended, Lawrence went on to star in her own series, Mama’s Family, with Ken Berry, Dorothy Lyman, Beverly Archer, and Allan Kayser and most recently was seen playing Miley Cyrus' grandma on Hannah Montana. Read More >

Lawrence gained national recognition not only as an actress, but also as a game and talk show host, recording artist, theatre performer, and writer. She became the first woman to host a game show with the daytime network version of Win, Lose, or Draw. In 1992, her daytime talk show Vicki! was one of the most successful daytime talk shows to debut. She received critical acclaim as the only talk show host since Oprah Winfrey to be nominated for a Daytime Emmy in her freshman year. In the fall of 1997, she briefly returned to daytime talk as the host of Fox after Breakfast from New York City.

Her musical career peaked in 1973 when she received a gold record for her international hit single, “The Night the Lights Went Out in Georgia.” On stage, she has appeared in numerous productions, including "Carousel,” "Send Me No Flowers,” "No, No, Nanette,” "My Fat Friend,” "Chapter Two,” "Twigs,” "Hello Dolly,” "Special Occasions,” "I’m Getting My Act Together and Taking It ON the Road,” "Annie Get Your Gun,” and live from the Grand Ole Opry, "Nunsense 3: The Jamboree," which aired on TNN. Most recently, she appeared in the “The Vagina Monologues.”

An avid women’s rights activist, Vicki Lawrence travels across the country speaking to organizations about her life and career, women's health, and being a woman in a man's world. She approaches everything with her characteristic sense of humor, reminding us all that "life is much too serious to be taken seriously!" She was recognized for her efforts in 1988 when she was the first woman to be honored as “Person of the Year” by the Coalition of Labor Union Women. She works with the Humane Society and has done much work with the American Heart Association and their "Go Red for Women" campaign. When she is in town, she hosts the annual Walk for the Cure, all proceeds of which go to breast and ovarian cancer research at the Long Beach Memorial Center.

In 1995, she published her autobiography, Vicki!: The True Life Adventures of Miss Fireball. Read Less ^

Being a Woman in a Man's World

Lawrence travels all over the country speaking to women’s organizations about her life and career, and the challenges and obstacles faced as a woman in what is seemingly still a “man’s world.” She’s brings to the stage her characteristic humor and wit, reminding us all that "Life is much too serious to be taken seriously!"

Life Is Much too Serious to Be Taken Seriously

In this talk—equal parts funny and poignant—Vicki Lawrence shares with audiences the story of her life: a story of fun and comedy that includes how she met Carol Burnett and how she “became a natural redhead.” Lawrence also talks about being a working mom (its challenges and rewards) as well as a more difficult time in her life: when her talk show was cancelled and she battled with depression. With the belief that laughter is the best medicine, Vicki Lawrence wraps up her speech by sharing with audiences her personal mantra: “Life is much too serious to be taken seriously.”

"A big thank you for working with me on having Vicki come to Richmond and speak at The Tuckahoe Woman's Club. As you know she was the first speaker of the 2012-2013 club year. She was a delight to be and she was a hit!"

"Vicki was amazing!!! She was very down to earth and a pleasure to be around. Not to mention, I think she was our funniest speaker yet. The crowd LOVED her!!! So did I - she was awesome! Her talk was so funny that I was crying from laughing so hard. I think she exceeded all our expectations. Thanks to APB for all their help. I am ready to start looking at next year's speakers!"

"She was great! VERY funny speech (laughed VERY hard!) and was very willing to do whatever and go with the flow." 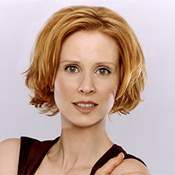