Named a 2005 MacArthur Fellow, President Obama’s first appointment to the National Council on the Arts and member of President Biden’s Arts Policy Committee, Aaron P. Dworkin is former dean and current Professor of Arts Leadership & Entrepreneurship at the University of Michigan’s School of Music, Theatre & Dance. Aaron is a best-selling writer and poetjournalist having authored his poetry collection, They Said I Wasn’t Really Black, along with four other books including his memoir, Uncommon Rhythm: A Black, White, Jewish, Jehovah's Witness, Irish Catholic Adoptee's Journey to Leadership and The Entrepreneurial Artist: Lessons from Highly Successful Creatives. Aaron originated the terminology “poetjournalism” which he defines as “journalism in which a news story is presented in poetic form incorporating elements of emotion, opinion and creative illustration.” He serves as the Poet-in-Residence of The Rodham Institute at George Washington University, Max M. & Marjorie S. Fisher Foundation, Wright Museum of African-American History, Ovation TV Network and Shar Music. Hailed by critics as “powerful,” “stirring,” “passionate and heroic,” and “a tour de force,” Aaron has performed his poetry as a prominent spoken-word artist during his national tours including the Wright Museum in Detroit, Galapagos Theater in New York, Harvard University, Chautauqua, University of Michigan, Minneapolis Orchestra Hall, NJPAC and Orchestra Hall in Detroit amongst others and is a member of the Academy of American Poets. He has been featured on The Today Show, NBC Nightly News, CNN, Jet Magazine and named one of Newsweek’s “15 People Who Make America Great.” He has two recording albums and collaborated with a breadth of artists including Yo-Yo Ma, Damien Sneed, Anna Deveare Smith, Damian Woetzel, Lil Buck and others. His Emmy award-winning film An American Prophecy was honored by numerous festivals, while his visual digital art project, Fractured History, has exhibited to rave reviews. Read More >

Aaron is also a leading social entrepreneur having founded the globally-recognized Sphinx Organization, the leading arts organization with the mission of transforming lives through the power of diversity in the arts. He also serves as host of the nationally-broadcast Arts Engines show with a viewership of over 100,000. Aaron is the recipient of honors including the National Governors Association Distinguished Service to State Government Award, BET’s History Makers in the Making Award and Detroit Symphony Orchestra’s Lifetime Achievement Award and been named Detroit News’s Michiganian of the Year and the National Black MBA’s Entrepreneur of The Year.

A sought-after global thought leader and a passionate advocate for diversity and inclusion, excellence in arts education, entrepreneurship, and leadership, as well as inclusion in the performing arts, Aaron is a frequent keynote speaker and lecturer at numerous universities and global arts, creativity, and technology conferences. He has served on the Board of Directors or Advisory Boards for numerous influential arts organizations including the National Council on the Arts, Michigan Council for Arts and Cultural Affairs, Knight Foundation, National Association of Performing Arts Professionals, Avery Fisher Artist Program, Independent Sector, League of American Orchestras, Ann Arbor Area Community Foundation, Michigan Theater and Chamber Music America. Having raised over $50 million for philanthropic causes, Aaron personifies creative leadership, entrepreneurship, and community service with an unwavering passion for the arts, diversity, and their role in society. Read Less ^

On Inclusion in American Orchestras

Breaking the Sound Barrier: Importance of Diversity in the Arts

Throwing the DICE: A Journey in Diversity, Innovation, Creativity & Entrepreneurship

Breaking the Sound Barrier: Diversity in the Performing Arts 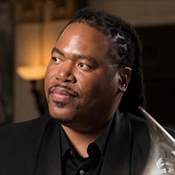