Artist. Athlete. Activist. Adam Rippon is a combination of all three. One of the most dramatic figure skaters on the planet, Adam won the hearts of America and the world at the 2018 Winter Olympics. Known for his refreshing candor and wit, his rise to fame on the global stage has provided him with a platform to speak out in support of LGBTQ rights and the freedom to be oneself. His passion and charm have made him an inspiration to young and old alike and he has quickly become a role model and icon to millions. Read More >

He has been honored by the Human Rights Campaign (HRC) with their Visibility Award and has been recognized by the Matthew Shepard Foundation and the San Francisco Gay Men’s Chorus. The oldest of six children from Scranton, Pennsylvania, Adam rose through the skating ranks, claiming the world junior title twice before winning the U.S. men’s title in 2016. He was named to his first Olympic team in 2018 at the age of 28. Adam also made the bold decision to come out publicly in October 2015 which led him to become the first openly gay athlete to medal for the United States in Winter Olympic competition.

He has been featured on the covers of the New York Times Style section, ESPN’s Body Issue, The Washington Post Magazine, The Guardian’s G2 and OUT Magazine and celebrated in the pages of InStyle, Rolling Stone, Vanity Fair, People Magazine, Harper’s Bazaar, Paper, Elle, Cosmo and many more.

He has worked as a special correspondent for ABC on both Good Morning America and Nightline, including meeting with LGBTQ youth in Laramie, Wyoming for a feature which was nominated for a GLAAD Award. He made his live theater debut in the fall of 2018 in a benefit reading of The Laramie Project. He was a judge on the premiere season of Dancing with the Stars (DWTS) Juniors, after having won the DWTS: Athletes Mirrorball Trophy in May, and has appeared on Will & Grace and in Taylor Swift’s You Need to Calm Down video.

His memoir, Beautiful on the Outside, was published in 2019 to rave reviews. He has hosted two seasons of “Break the Ice with Adam Rippon” a weekly celebrity interview show on the ice, which airs on his YouTube channel. He can currently be seen on Messyness, a comedy clip series spinoff of Ridiculousness, which airs on MTV and recently hosted “Talkin’ Tokyo”, an original daily twitter show from the Tokyo Olympics, for NBC. Read Less ^

An Evening with Adam Rippon

Beautiful on the Outside: A Memoir 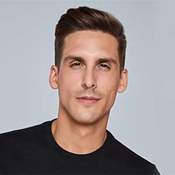