The “Original Hip-Hop Minister” Rev. Conrad Tillard has made a tremendous contribution to the advancement of African-American for nearly 30 years and yet his message is more timely today than it ever was, speaking truth to power, 2015 recipient of the Ecumenical Leadership Award by the Community Council of Medgar College CUNY and The Culvert News’s Humanitarian Community Leadership Award ,  Rev. Conrad B. Tillard was also selected  in 2009 as "Pastor of the Year" in Brooklyn, New York by Church Women United and in 2005 and 2006 by Beliefnet.com as one of “Leaders”, in the United States. The Reverend Conrad B. Tillard is an important ecclesiastical voice in America, he has been a student activist, parish minister and community activist for over 20 years.  Read More >

Today he serves as the Host/moderator of an exciting, popular radio talk show, Conversations with Conrad on WHCR(whcr.org) 90.3 FM in New York City. He is the immediate past, Senior Minister, of The  Nazarene Congregational Church, a, United Church of Christ (UCC), congregation in the Bedford Stuyvesant community in Brooklyn, New York. One of the oldest African-American congregations in the City of New York.  During his time in Brooklyn, Rev. Tillard was extremely active in the community serving on a number of advisory boards including Boys and Girls High School and Bedford Academy. He was also very outspoken on the issues that affect the quality of life of Bedford-Stuyvesant including crime, education, police brutality and NYPD’s controversial Stop and Frisk policies and served as a mentor to many youth in the community. In 2013 he ran an exemplary campaign for the New York City Council, earning the votes of over 2,000 residents of the 36th Council District.

He is the former Interim Senior Minister, of the 170 year old Eliot Congregational Church of Roxbury, located in inner-city Boston. Eliot Church is a vibrant United Church of Christ congregation, with expansive community service ministries.

The Reverend Conrad B. Tillard was born September 15, 1964 in St. Louis, MO.  He is a graduate of Francis L. Cardozo High School in Washington, D.C. and earned a Bachelor of Arts (B.A.) degree from the University of Pennsylvania in Philadelphia, PA, majoring in African American Studies.  He has pursued graduate studies at both the Harvard Divinity School and Harvard’s John F. Kennedy School of Government.

Rev. Tillard earned the Master of Divinity (M.Div.) degree in systematic theology and Christian social ethics at The Union Theological Seminary in the City of New York, studying under the esteemed scholar Dr. James H. Cone, the father of Black Liberation Theology. Rev. Tillard is also a graduate of Princeton Theological Seminary, where he earned a Master of Theology (Th.M.) in practical theology, with a concentration in congregational ministry. Rev. Tillard  is  in pursuit of Doctorate (D.Min.) at Andover Newton Theological School, the oldest graduate institution in the United States located outside of Boston.

Reverend Tillard is a Baptist and United Church of Christ minister, licensed and ordained at historic Abyssinian Baptist Church of the City of New York.  He was trained and mentored in the Gospel ministry by the Rev. Dr. Calvin O. Butts, III, Pastor of Abyssinian.  He is affiliated with the United Missionary Baptist Association of New York, Empire Baptist Convention and the National Baptist Convention USA, Inc., and holds dual standing with the Metropolitan Association of the United Church of Christ New York Conference. Rev. Tillard is also a lifetime member of the NAACP, and active in the organizations Brooklyn branch. He is an alumnus of the Jewish Community Relations Council of New York Inc.’s inaugural Black Ministers Mission to Israel. The mission included a comprehensive agenda during the week-long trip to Israel had the delegation crisscrossing the country to visit holy sites, historic geopolitical hotspots and meeting with clergy, community groups and government officials.

Previously he served as the Project Director, for New Yorkers for the Gulf Coast(NY4GC) an organization uniting leaders of the religious, business and entertainment sectors together to continue to provide support to victims of Hurricane Katrina.

Rev. Tillard started his career as a student activist, working as a National Student Coordinator in the 1984 presidential campaign of Rev. Jesse L. Jackson.  In 1985 he joined the Nation of Islam and rose rapidly in that movement, he was appointed the National Youth Minister in 1989 and in 1991 he was installed as Presiding Minister of the organization’s legendary Mosque #7 in Harlem where he served for seven years and enjoyed a celebrated ministry working with youth, gangs, ecumenical and interfaith groups and student organizations throughout the five boroughs of New York City and nationally.

In 1998 he resigned from that movement and started down the road that would reunite him with the Body of Christ, he enrolled at the Harvard Divinity School to study theology.

It was a class at Harvard on the profound Baptist theologian, Howard Thurman that gave him new insight into Jesus, Christ, and his mission of universal brotherhood, reconciliation and love. On a cold and snowy February night in Rockefeller Hall at Harvard Divinity School he had a powerful and dramatic conversion experience in 2001 and he accepted Jesus, Christ, became his disciple and returned to the church of his youth, and joined Abyssinian Baptist Church in Harlem.

In 1998 he also founded A Movement for CHHANGE, a youth organization credited with creating the thrust of hip-hop political activism.  He has been both a mediator of hip hop’s violent conflicts and spiritual mentor to troubled hip-hop personalities such as, Sean “P-Diddy” Combs and Jamal “SHYNE” Barrow.  He has been an outspoken critic of negativity in youth culture and the Hip-Hop industry

Tillard has been featured nationally, in magazines and newspapers:  Savoy, Vibe, Source, Esquire, XXL, Essence and Ebony, as well as Time and Newsweek.  The New York Times, Washington Post, Philadelphia Inquirer and the Los Angeles Times are merely a few national newspapers that he has appeared in.  Recently, he was featured in Essence Books, 50 of the Most Inspiring African-Americans, and in 1999, he was among leading African-American men in another of Essence Books entitled, Essence in Celebration of Our Brothers.

Rev. Tillard is a regular guest host on the station's GBE's Express Yourself and Politics Plus programs.

In 2001 he co-wrote and hosted a one-hour television program, Culture Shock, for WPIX, Channel 11 in New York City.  The program, addressing the issue of negative imagery in the media in youth programming, won the 2001 National Council on Family Relations First Place Media Award and Platinum Best; in 2002 the program won the Show Award and the Aurora Award.

Reverend Tillard is currently working on his autobiography that will detail his ministry and spiritual journey through the African-American religious experience. The Prodigal Son Imperative: In My Father’s House will be published soon.

A family man, he is the proud Father of four beautiful, talented and gifted children: Amir, Najmah, Conrad Jr. and Barack.

The Reverend Conrad B. Tillard, the activist preacher is committed to a life and ministry that can best be summed up in the phrase, “unashamedly Black and unapologetically Christian”. Read Less ^

Not Right, Not Left, but Common Sense, Consensus & Compromise: Have We Lost the Ability to Speak to Each Other in America?

The Original Hip Hop Minister Speaks: The Politics of the Golden Age of Hip-Hop 1985-2002

The G Word: Gentrification in Our Community

Black Lives Matter? Always Have: The History of the Movements that Preceded BLM

Stop Telling Me What to Think: A Progressive Critique of Political Correctness

The Radicalization of American Youth 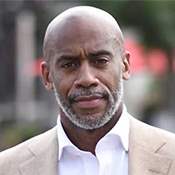