A fourth-generation ordained minister, civil rights attorney, social justice activist, coalition builder and writer, Cornell Brooks served as the 18th President and CEO of the NAACP. While there, he led the organization in securing 11 victories against voter suppression in 12 months. As a speaker, Brooks has picked up the mantle of the powerful orators that have influenced him, including Dr. Martin Luther King. His moving keynotes inspire audiences to broaden their perspectives, expand their definition of inclusion and diversity, eliminate inequality and honor the history and ever-evolving mission of the civil and human rights movement. Read More >

A graduate of both Head Start and Yale Law School, Brooks is a champion of the transformative power of education and considers himself “a grandson, heir and a beneficiary” of the landmark Brown v. Board of Education decision argued by NAACP litigator Thurgood Marshall. He was called to the ministry while studying political science at Jackson State University, later becoming a Martin Luther King Scholar and earning a Master of Divinity from the Boston University School of Theology. Prior to joining the NAACP, Brooks was the president of the New Jersey Institute for Social Justice and worked as a civil rights attorney, housing and social justice advocate and as a fourth-generation minister in the African Methodist Episcopal Church. He also followed in the footsteps of his grandfather by running for Congress as an impassioned voice for public education, fiscal responsibility and affordable healthcare. He attributes his interest in healthcare to his father’s experiences as a physician in an African American community struggling with disparities in care. Brooks served for many years on the East Orange Hospital Board of Trustees and lead the NAACP’s national agenda to improve the health and well-being of African American families and families of color.

Brooks was most recently visiting professor of social ethics, law, and justice movements at Boston University’s School of Law and School of Theology. He was a visiting fellow and director of the Campaign and Advocacy Program at the Kennedy School’s Institute of Politics in 2017.

Moving, motivating, informative and insightful, Brooks brings both a proud personal heritage and a thought-provoking vision to the podium. He also explores new horizons such as the role of technology in achieving diversity and promoting diversity as a “cause” for cause marketing. Ever-aware of his own life-changing experience inspired by a powerful speaker, Brooks views each engagement as having the potential to transform and touch the hearts and minds of his audience. Read Less ^

Race Relations and the Legacy of the Civil Rights Movement

With the U.S. on track to become a minority majority by 2043, racial economic inequality, including healthcare disparities, increasingly impedes the country’s economic advancement. Cornell Brooks examines healthcare disparities from his leadership role at the NAACP, citing data gathered in the NAACP’s Opportunity and Diversity Report Card on the Healthcare Industry and his longtime service on the board of a New Jersey hospital. He also brings the moving narrative of viewing the nation’s health disparities through the eyes of his father, a physician in the low country of South Carolina. Brooks saw his father’s patients suffering the many maladies of the poor, including hypertension, diabetes and cardiovascular disease. According to Cornell Brooks, “We have to think about people who are holding on to the ragged edge of their own existence, with a very fragile grip on health.”

Ferguson. Staten Island.  North Charleston. Cleveland. Cornell Brooks has traveled the nation, led a 40-day march from Selma to Washington, D.C. and continues to stand shoulder to shoulder with those advocating for justice and change. As the 18th president of the NAACP, Brooks united groups as diverse as the AFL-CIO, Sierra Club and National LGBTQ Task Force. He also actively embraced Black Lives Matter within the evolving continuum of civil rights activism. In this informative and motivational presentation, Brooks calls on everyone to promote the cause of justice and join a multi-racial, multi-faith, multi-generational movement that welcomes people from all sexual orientations and walks of life. “It can’t just be the righteous few,” he says. “There’s got to be an ever-growing many that’s not just saying what’s wrong, but what can be made right.”

“The words and work, the life and legacy of the Reverend Dr. Martin Luther King are far too important to be relegated to the gilded pages of history books.” Cornell Brooks sees Dr. King’s “words and work, life and legacy are a part of our nation’s Twitter feed” and believes that “we must be reminded of Dr. King’s service, sacrifice and eloquence of example, not just on Martin Luther King Day, but every day.” As both a Martin Luther King Scholar and student of Dr. King’s works, Cornell Brooks challenges all Americans to “emulate his personal example, draw from his philosophy, and in so doing, make this country the very best that it can be.”

The Global Village: Standing up for Tolerance & Inclusion

All around the world, people are facing threats to their human rights. From orphans in war zones to immigrants seeking to escape both physical threats and economic deprivation, Cornell Brooks reminds us that, a generation ago, Martin Luther King spoke about the world as a global village. He calls upon all of us to “stand up for the human rights of all members of this village, irrespective of their color, their creed, their hue or their heritage.” In a time of Islamophobia, anti-immigrant sentiment and calls to build walls, Brooks confronts intolerance and exclusion and reminds us that Dr. King’s vision of a global village must continue to guide our future.

"We are grateful for the expertise you shared and the impact you made. The community of 3,000 teens you engaged with represents an ever-expanding network of 80,000 teens across 730 chapters throughout 53 countries. The anecdotal feedback on the experience as a whole has been wonderful, and the energy radiating from the teens is palpable. We are so appreciative of the time, energy, and commitment you offered our teens. Your patience and positivity throughout the convention were critical to our shared success. Thank you, again, for being an important part of our movement’s biggest moment yet...we’re just getting started!"

"From your talk to the subsequent conversation to dinner, it was a remarkable event. You talk resonated with so many members of the Penn community. The expectation that education should serve a civil right, and your assertion that educational debates have a moral urgency to them align perfectly with our mission. The impact of your presence is still reverberating."

"We are appreciative of the kind and generous spirit you displayed to the National Center staff, as well as to others you met in Montgomery. Most of all, we are grateful for the powerful address you delivered to our audience. Your oratorical talents, keen analysis of history, and unusual ability to connect current events to the Montgomery Bus Boycott, combined with your deep spiritual bent, made your address one of the most memorable in the seventeen-year-history of this program." 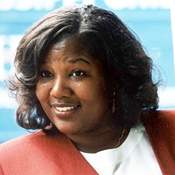