Dara Torres is arguably the fastest female swimmer in America. She entered her first international swimming competition at age 14 and competed in her first Olympic Games a few years later in 1984. At the Beijing Olympic Games in 2008, Dara became the oldest swimmer to compete in the Olympic Games. Read More >

When she took three silver medals home – including the infamous heartbreaking 50-meter freestyle race where she missed the Gold by 1/100th of a second – America loved her all the more for her astonishing achievement and her good-natured acceptance of the results.

In total, Dara has competed in five Olympic Games and has won 12 medals in her entire Olympic career. Her impressive performance in Beijing and her attempt at the 2012 London Olympic Games has inspired many older athletes to consider re-entering competition, including cyclist Lance Armstrong.

Aside from her amazing accomplishments in the pool, Dara has talents on dry land as well. A composed commentator, guest host and strong interviewee, she has appeared on such shows as Fox News, ESPN, CNN, Piers Morgan Tonight, Today Show, Good Morning America, Kelly and Regis, and many others. Additionally, Dara was the first female athlete ever to be featured in the Sports Illustrated Swimsuit Issue, and in 2009, won the ESPY award for “Best Comeback.” To add to Dara’s accolades, she was also named one of the “Top Female Athletes of the Decade” by Sports Illustrated Magazine.

Now a top-selling author, her memoir, Age is Just a Number: Achieve Your Dreams at Any Stage in Your Life, published in April, 2009 and was listed as one of the top 25 best-selling business books by June. Her second book, Gold Medal Fitness: A Revolutionary 5-Week Program hit stands in May, 2010 and is now a New York Times Best-Seller.

Olympian, author, mother, and role model, Dara Torres is many things to many people, but above all, she is an inspiration. Read Less ^

You're NOT Too Old to Chase Your Dream: Never Give Up on It

"It went great. Her speech was awesome, and she stayed to meet people and took photos with them. I enjoyed meeting her; she seems like a great person. The team was very excited to have her attend. Thank you for all of your help along the way!"

Age Is Just a Number: Achieve Your Dreams at Any Stage in Your Life 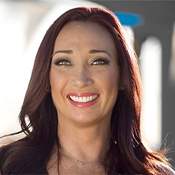