Veteran TV actor Dondré Whitfield is a three-time Emmy and NAACP Image award nominee and best known for his role as Remy Newell, a trusted friend working on the Bordelon land as a water irrigation specialist on the critically acclaimed series Queen Sugar, created and produced by Golden Globe-nominee Ava DuVernay and co-executive produced by Oprah Winfrey on the OWN Network. Read More >

Whitfield, whose career spans over a quarter century has appeared with such industry heavyweights as John Travolta, Helen Mirren, David Oyelowo, Michael B. Jordan and Kevin Hart to name a few.

Off-camera, Whitfield is passionate about helping address the challenges and pressures of masculine identity in the 21st century and co-created The Manhood Tour, a global movement committed to awakening the consciousness of men, giving them the keys to effective and impactful leadership, and teaching them how to tap into their talents and live them to the highest degree. Whitfield is regarded as a rising elder statesman who effectively brings into focus a broader, universal, ecumenical vision of the strategic opportunity to improve the condition of men and boys by building a path toward healthy and productive manhood that changes our communities.

Whitfield’s versatility as a comedic and dramatic actor has been showcased in several of his feature films as well, including the Independent Spirit Award-winning and Sundance Award-winning film Middle of Nowhere opposite David Oyelowo and directed by Ava DuVernay; the comedy 35 and Ticking opposite Kevin Hart; the award-nominated drama Pastor Brown opposite Michael B. Jordan; the comedies Mr. 3000 opposite Bernie Mac and Two Can Play That Game opposite Vivica A. Fox; and the Helen Mirren directed film Happy Birthday opposite Helen Mirren and John Goodman.

Whitfield’s other credits include recurring roles in several hit television series such as Real Husbands of Hollywood opposite Kevin Hart, ABC series ABC Family’s Make It or Break It; NBC’s The Event; CBS’ Cold Case and Ghost Whisperer opposite Jennifer Love Hewitt; ABC’s Jake in Progress opposite John Stamos; NBC’s Hidden Hills; CW’s Girlfriends opposite Tracee Ellis Ross; and the features White Man’s Burden opposite John Travolta; The Salon opposite Terrence Howard and Homeboy opposite Mickey Rourke and Christopher Walken.

Whitfield and his wife, actress and director Salli Richardson-Whitfield, live in Los Angeles with their two children. Read Less ^

How to Become a Man in The Age of Males

The Blueprint: Lessons on Being a Man & Raising a Man

Leaders Serve!: Strategies to Create Service Leaders in an Age of Selfishness

Restoration 101: Strategies to Look at Your Past to Unlock Your Best Future

Legacy Maps: Understanding How Your Backstory Shapes Your Narrative Today 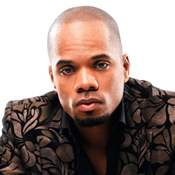