Eric Deggans is NPR’s first full-time TV critic, crafting stories and commentaries for the network’s shows, such as Morning Edition, Here & Now and All Things Considered, along with writing material for NPR.org. He also appears on NPR podcasts such as Life Kit, Code Switch, It’s Been a Minute and Pop Culture Happy Hour. Read More >

In addition to his NPR work, Eric is a contributor and media analyst for MSNBC and NBC News, dissecting media issues on NBC TV platforms and online. He is an adjunct instructor of journalism and public policy in the Sanford School of Public Policy at Duke University. And in 2020, he was given the Distinguished Alumni Service Award by Indiana University – the institution’s highest alumni honor -- four years after Indiana University’s Media School of journalism and communications named him a distinguished alumnus.

In 2019, Eric became the first African American to serve as chairman for the board of educators, journalists and media experts who select the George Foster Peabody Awards for excellence in electronic media at the University of Georgia. And in August 2019, he was honored with American Sociological Association’s Excellence in the Reporting of Social Issues Award.

He came to NPR in September 2013 from the Tampa Bay Times newspaper in Florida, where he served as TV/Media Critic and in other roles for nearly 20 years. A journalist for three decades, he is also the author of Race-Baiter: How the Media Wields Dangerous Words to Divide a Nation, a look at how prejudice, racism and sexism fuels some elements of modern media, published in October 2012 by Palgrave Macmillan.

Eric guest hosted CNN’s media analysis show Reliable Sources several times in fall 2013, joining a select group of journalists and media critics filling in for departed host Howard Kurtz; Eric appeared on Kurtz’s last show, guest hosted the program three times and then appeared on new host Brian Stelter’s first show. He also has joined a prestigious group of contributors to the first ethics book created in a partnership between Craigslist founder Craig Newmark and the Poynter Institute for Media Studies. Developed as Poynter’s first ethics book for the digital age, The New Ethics of Journalism was published in August 2013 by Sage/CQ Press.

In 2017, Eric was named one of the country’s 15 Most Influential Media Reporters by the website Mediaite and in 2009, he was cited as one of Ebony magazine’s “Power 150” – a list of influential black Americans which also included Oprah Winfrey and PBS host Gwen Ifill.

From 2004 to 2005, he sat on the editorial board for then-St. Petersburg Times (now known as the Tampa Bay Times) and wrote bylined opinion columns. From 1997 to 2004, he worked as TV critic for the Times, crafting reviews, news stories and long-range trend pieces on the state of the media industry both locally and nationally. He originally joined the paper as its pop music critic in November 1995; he has also worked at the Asbury Park Press in New Jersey and both the Pittsburgh Post-Gazette and Pittsburgh Press newspapers in Pennsylvania.

Now serving as chair of the Media Monitoring Committee for the National Association of Black Journalists, he has also served on the board of directors for the national Television Critics Association and the board of the Mid-Florida Society of Professional Journalists.

Additionally, he worked as a professional drummer in the 1980s, touring and performing with Motown recording artists The Voyage Band throughout the Midwest and in Osaka, Japan. He continues to perform with area bands and recording artists as a drummer, bassist and vocalist. Read Less ^

TEDx: How to Talk About Race

The Daily Show News Team: Content From Their Couches | SXSW 2021

As the debate about racism in film, TV and pop culture builds, people need information on how to recognize prejudice and stereotypes in modern media projects and news reporting. Eric Deggans offers a presentation aimed at identifying how to identify and talk about racial issues in media and modern life, complete with a list of the four types of racism which most often affect media and a quiz to help people learn how their perceptions on race may have been affected by media messaging

How to Talk About Race & Social Issues Without Conflict

One of the biggest challenges people face in modern life -- whether they are educators, business leaders, journalists or average citizens -- is having important conversations about race, gender or social issues which bring progress without heated conflict. In his roles as an author, analyst and educator, Eric Deggans has been leading significant conversations on such topics for more than 20 years. This presentation features information on how to have these important conversations in a relaxed, even fun way, connecting participants across race, gender and class lines while exploring crucial ideas about racism, sexism, prejudice and stereotypes.

How to Talk on Race, Gender & Culture in the World & in Your Classes

With increased scrutiny on how issues of race, gender and difference are talked about in classrooms, it is important for educators and academics to have the proper tools for dissecting such issues in classrooms. Eric Deggans has developed a version of his presentation on talking about race and social issues without conflict specifically for educators and academics. It highlights everything from how to navigate tricky topics, to dissecting important social issues and how the methods people use to judge progress on racial and gender issues may affect how they communicate on those issues.

The Future of TV, Social Media & Objective Truth in the Modern World

Today's clash between political ideologies and evolving technologies has created a world where people have trouble agreeing on the most basic facts, even as the growing reach of media products connects us in ways we could not have imagined just 10 years ago. Through his work as a media analyst, TV critic and social issues thought leader, Eric Deggans has developed a presentation outlining how media technology will evolve in the future and how that will affect how we all communicate with each other. He explores whether the film industry has a future, why misinformation and argument culture may be the biggest threat to democracy and why what the consumer wants is becoming the most powerful metric in media.

"No one breaks down the complexity of race, media, and popular culture more cogently than Eric Deggans.  Witnessing him speak in person (which I did at Harvard), with his informative, entertaining and interactive PowerPoint, and his utterly engaging ‘teacherly’ persona, is even more rewarding than hearing his NPR commentaries, which are always masterfully superb.  No one teaches me more about contemporary media than Eric Deggans."

"Eric Deggans is one of the most insightful and provocative writers about television today.  In his columns for the St Petersburg Times and his NPR commentaries, Deggans has established himself as a voice worth listening to. His many fans -- and I'm one of them -- will devour this book."

"If you care about this country, if you want to take part in a citizen’s movement that helps heal the deep racial, economic, and cultural divides tearing us apart, you must read Eric Deggans’ Race-Baiter. No book of recent vintage so thoroughly dissects the media’s monetized appetite for division. Provocative, honest, and smart, Race-Baiter is a supremely important book. Read it and let the conversation begin."

- Connie May Fowler, Author of Before Women had Wings

"Eric Deggans proves that he is one of the most insightful and courageous writers covering today's fast-shifting media landscape. This is an important book."

- Michele Norris, Former Anchor of NPR's All Things Considered and Founder of The Race Card Project

"Deggans, the first-rate TV and media critic for the Tampa Bay Times...makes a smartly presented call for more civil discourse."

"Deggans is the veteran TV and media critic for the Tampa Bay Times, and best I can tell, the nation's premiere commentator on matters relating to race in the media…(Race-Baiter is) a sober, thoughtful and intelligent analysis…"

Race-Baiter: How the Media Wields Dangerous Words to Divide a Nation

The New Ethics of Journalism: Principles for the 21st Century 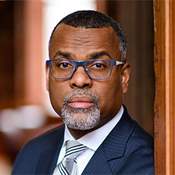