Olympic gold medal winner, World Heavyweight Champion, and wildly successful entrepreneur behind the George Foreman Grills, George Edward Foreman was born an impoverished youth in Texas who often bullied younger children and didn't like getting up early for school. By age 15, he had traveled down a hard road, becoming a mugger and brawler on the hard streets of Houston’s 5th ward. Fortunately for him, he was saved by Lyndon Johnson's Job Corps program, which helped troubled kids and he traveled to California, where he met Job Corps counselor and boxing coach Doc Broaddus, who encouraged Foreman to become a fighter. Read More >

Once he began to train at the gym, Foreman rapidly established an impressive amateur record. The culmination of his amateur boxing career came at the 1968 Olympics in Mexico City, where he won a gold medal in his 25th amateur fight.  Brandishing an American flag after his win, he later said "I wanted everyone in the world to know I was an American and proud of the opportunity that I was given to do what I had done."

In 1969, Foreman turned professional. Within two years, he was ranked the No. 1 challenger by the WBA and WBC and by 1972, he amassed an impressive record of 37 wins (most by knockout) and no losses.

Foreman got his shot at the world heavyweight championship when he was scheduled to fight Joe Frazier in Kingston, Jamaica in 1973. Frazier was the favorite going into the bout, but Foreman knocked him out in the second round. This bout made history as HBO’s first-ever broadcast of a fight with an unprecedented numbers watching as Foreman became the champ.

Foreman successfully defended his title twice. He beat Puerto Rican heavyweight champion Jose Roman in 50 seconds, the shortest heavyweight championship match.  He also beat Ken Norton (who had just beaten Muhammad Ali) in a mere two rounds. But when Foreman faced off against Ali himself in the summer of 1974, he went down.

The much-hyped "Rumble in the Jungle" in Kinshasa, Zaire, had been delayed due to an injury Foreman had suffered in training.   Ali had spent the interim taunting Foreman relentlessly, making him too angry and frustrated to stay focused.

After taking 1975 off, Foreman returned to boxing, winning a number of fights before losing by decision to Jimmy Young in Puerto Rico in 1977.   It was in his dressing room after the fight that Foreman had a religious experience and he gave up boxing and became a born-again Christian.

Ordained a minister, he began preaching in his hometown of Houston, Texas. In 1984, he founded the George Foreman Youth and Community Center, a non-denominational place for kids who need direction and hope, just like he once did.

However, the George Foreman Center needed money to stay operational and by 1987, Foreman decided to return to boxing to support it.  Training to peak form, he proved his detractors wrong when he continued to win fights well into his 40s.   In 1991, he had a shot at the title, but lost to champ Evander Holyfield by decision.

In 1994, however, Foreman took on the new champ Michael Moorer, and knocked him out in the 10th round, becoming, at age 44, the oldest fighter ever to win the heavyweight crown, and also the fighter with the most time between one world championship and the next.   Foreman gave away his titles in 1995, after defending them against Axel Schultz and refusing a rematch.

By the time Foreman retired from boxing (again) in 1999, he was well on his way to a second career as a businessman.  In the early 1990s, Foreman had discovered his talent for salesmanship, and by the end of the decade, he was making millions off of infomercials marketing the George Foreman Lean Mean Grilling Machine which has sold over 100 million units to date.

Foreman has also spent over a decade promoting Meineke Car Care Centers and has helped grow the business to over 1,000 franchises.  He successfully launched a line of environmentally safe cleaning products, exclusive line of personal care products, a health shake called George Foreman’s Life Shake, a prescription shoe for diabetics to prevent amputations, and a restaurant franchise called UFood Grille.  He has written ten books.   When not promoting Meineke mufflers or selling grills, Foreman tends to his ministry and charitable work, including most recently his “Knock-Out Pediatric Cancer” initiative.  Read Less ^

How to Get Up When Life Knocks You Down

The Art of Fighting in Business & in Life

"Your recommendation was spot on! George was very personable and a great pleasure to work with. Thank you so much for making the process a smooth one." 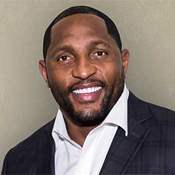