60 Minutes journalist Lesley Stahl describes Irshad Manji as the "master of moral courage." In her internationally acclaimed work, Prof. Manji role models the key teaching of moral courage: that doing the right thing in the face of our fears makes us whole. Being whole, in turn, equips us to find our unique voices, discover our personal missions, overcome adversity in pursuit of those missions, make new mistakes to deepen our creativity, listen to other points of view, and steel our spines for the challenge of leading amid flux. Read More >

In short, moral courage generates diversity of ideas: the source of all innovation.

Out of her signature teachings, Prof. Manji has created a curriculum for entrepreneurs and disruptors in various environments — from companies to start-ups to schools to government agencies. She now teaches this curriculum, Applied Courage, at Human Condition Labs in New York City.

A senior fellow at the University of Southern California, Prof. Manji shuttles between New York and Los Angeles, using the culture of each city to inform the other. She also travels beyond both coasts to engage the global audience that she has built as a religious reformer, best-selling author, and award-winning filmmaker.

For all her titles, Prof. Manji is an educator at heart. She started the Moral Courage Project at New York University, during which time she shared the stage with His Holiness the Dalai Lama, Martin Luther King III and Christiane Amanpour. African by birth, Canadian by citizenship, American by immersion and universal by reach, Irshad Manji inspires new perspectives on success, significance, diversity and meaning in work. Read Less ^

Prof. Manji – an educator at New York University and the University of Southern California – leads the Moral Courage Project, an award-winning multi-media program that teaches students to do the right thing in the face of their fears.

As she points out, this is the first generation in history that’s expected to address global challenges. The Greatest Generation fought a world war but didn’t grow up anticipating that they would need to. Today, university students are well aware of the need to be global citizens. But what most people underestimate is the amount of courage it will take to make a difference.

In her dynamic presentation, Irshad Manji will show us how to become gutsy global citizens – not by sloganeering, but by engaging with those who offend us. Her provocative thesis: Offense is not a problem to be avoided at all costs. Offense is the cost of honest diversity.

It’s time for a real conversation about how to have a real conversation – one that requires us to dignify each other without sacrificing free speech. The “Master of Moral Courage,” Irshad Manji, is our compassionate and constructive guide. Prepare for a journey that opens minds and hearts. Read Less ^

Described by The New York Times as "Osama Bin Laden's Worst Nightmare," Irshad Manji is a gay, faithful Muslim woman who believes in the power of liberty and love. Her books are bestsellers in some countries and banned in others. She has taken on Islamist extremists toe-to-toe, dealt with numerous death threats and cultivated a worldwide following of Muslims and non-Muslims alike. Read More >

As part of Irshad's multi-media presentation, members will see unreleased video of Irshad challenging the head of Islamic Jihad in Gaza. They will witness her standing up to radicalized young men who invaded her book launch in Amsterdam. And they will feel the inspiration that Irshad gave to supporters in Jakarta after being physically attacked.

Irshad (her name means "guidance" in Arabic) teaches at both New York University and the University of Southern California on the subject of moral courage. She is also co-founder of “Applied Courage,” a unique leadership program at Human Condition Labs in New York. Its mission is to equip innovators how to overcome adversity and become that much more creative by confronting their fears.

As the world's fastest-growing religion, Islam is impacting business and current events in ways that are impossible to ignore. But most of us are afraid to voice the questions that we have about Islam. No more!  Read More >

Irshad Manji, acclaimed author of The Trouble with Islam Today and Allah, Liberty and Love, is the go-to resource. Her books are bestsellers in some countries and banned in others. The New York Times calls her "Osama Bin Laden's worst nightmare," while Oprah has given her the first annual Chutzpah Award for "audacity, nerve, boldness and conviction."

In this interactive and unfiltered presentation, Irshad will tackle politically incorrect questions that nobody else dares to touch. She will do so with a style that's accessible, friendly and even fun. Members will see why Irshad's "keep it real" approach has earned her fierce fans as well as death threats around the globe.  Read Less ^

"Irshad Manji was the enthusiastic spark and call to action that we needed to conclude the ACPA 2016 Convention. She inspired some 800 delegates not only to embrace, but to leap into moments of great courage even in the face of fear and difficulty. Above all, Irshad took the time to get to know us, our organization, and our values."

"If you want to cultivate the next generation of leaders to practice self-awareness, diversity of thought and moral courage, I passionately recommend Irshad Manji as your go-to speaker. In addition to delivering a dynamic keynote that kept 600+ students, staff, faculty and community members riveted, Irshad arrived early in case of a snowstorm, customized a workshop on diversity and inclusion for students, faculty and administration, and engaged students at a post-speech mixer to the point where I literally had to drag her away from them (and them from her!). In short, Irshad developed personal relationships that moved the MSU community to new levels of action, touching even those who disagreed with her perspectives. She truly is an inspiration."

"During a Chicago blizzard, Irshad Manji managed to pack the auditorium. The campus is still buzzing about her visit. This is the university experience at its best."

- Office of GLBT Concerns, University of Illinois at Chicago

"I have seen Irshad engage with the brightest of our business students. She is principled yet compassionate, brave yet understanding. Today’s MBAs have much to learn from how she practices timeless values in an era of instant gratification."

"Irshad spoke on stage with His Holiness the Dalai Lama. He, in turn, picked up on her message – that questioning is a basic human need – and he reinforced it with the audience. That is how dynamic a speaker Irshad is."

"Irshad’s message clearly captivated and resonated with our students. Their standing ovation said it all."

The Trouble with Islam Today: A Muslim's Call for Reform in Her Faith

Allah, Liberty and Love: The Courage to Reconcile Faith and Freedom 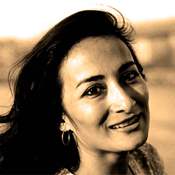