Asra Q. Nomani is the author of the critically acclaimed Standing Alone in Mecca: An American Woman's Struggle for the Soul of Islam and of Tantrika: Traveling the Road of Divine Love. A former Wall Street Journal correspondent, Nomani has also written for The Washington Post, The New York Times, and Time magazine on Islam. Read More >

After 9/11, she went to Pakistan to cover the war in Afghanistan for Salon. She risked great danger helping lead the hunt to find kidnapped fellow reporter and friend Daniel Pearl who was visiting her home with his wife Mariane Pearl when he left for the interview from which Muslim militants kidnapped and murdered him. Her character figures prominently in A Mighty Heart, the film based on the life and death of Pearl at the hands of Pakistani militants, starring Angelina Jolie. Nomani also taught “The Pearl Project: The Search for Who Killed Daniel Pearl” at Georgetown University in 2007.

After Pakistan, Nomani returned to her home in Morgantown, West Virginia, to raise her son Shibli. She has become a writer-activist dedicated to reclaiming women's rights and the principles of tolerance in the Muslim world. Nomani challenged rules at her mosque in Morgantown that required women to enter through a back door and pray in a secluded balcony. As a volunteer at the Rape and Domestic Violence Shelter in Morgantown, Nomani recognized that efforts to bring about social justice include challenging power and control that retaliate with intimidation and abuse.

Nomani is the founder and creator of the Muslim Women's Freedom Tour. In 2005, she posted “99 Precepts for Opening Hearts, Minds, and Doors in the Muslim World” on the doors of her mosque in Morgantown and organized a woman-led Muslim prayer group in New York City, an act that represented a watershed moment in the history of Islam. She was a visiting scholar at the Center for Investigative Journalism at Brandeis University. Her career as an investigative reporter prepared her for a journey in which she has been trying to uncover the true beauty of Islam, hidden behind centuries of manmade rules and traditions. She is committed to seeing hearts, minds, and doors open in the Muslim world as part of a wider vision for world peace.

Born in Bombay, India, into a modern but conservative Muslim family, Nomani came to the United State at age of four and was raised in the foothills of West Virginia. Read Less ^

The Paradox of Women in Islam

In this presentation, journalist, author, and speaker Asra Nomani—who was born into a conservative Muslim family from India—chronicles the struggle Muslim women face in reclaiming the rights women were granted at Islam’s birth in the seventh century, which have since been erased by centuries of man-made rules and tribal traditions masqueraded as divine law. Read More >

To many, the Islamic feminist movement is filled with "the bad girls of Islam." But Nomani argues that their efforts are not anti-Islamic—rather, they use the fundamentals of Islamic thinking (the Koran; the Sunnah, or traditions and sayings of the prophet Muhammad; and Ijtihad, or independent reasoning) to challenge the ways in which Islam has been distorted by Sharia rulings issued by ultraconservative men. From the mosque to the bedroom, Muslim women have begun to challenge customs that deny them their basic rights, in such areas as gender segregation, mandatory veiling, forced early marriages, clitorectomies, polygamy, death for sex outside of marriage, domestic violence, and strict domestic roles. Nomani shares her personal story of empowerment, in which she walked through the front door of her mosque in Morgantown, West Virginia, in 2003, and gathered up the strength to go into the main hall reserved for men only.

The struggle, she asserts, is to move Islam forward by reaching back to its progressive past. The effort, she says, is nothing short of a revolution. Read Less ^

Speaker Asra Nomani got a firsthand glimpse of Islamic extremism when her dear friend and former Wall Street Journal colleague Daniel Pearl was murdered in Pakistan. When she returned home to West Virginia to raise her son, she found warning signs of extremism at the local mosque: the exclusion of women, intolerance toward non-believers, and suspicion of the West. Read More >

Her resulting campaign against extremism in the Islamic Center of Morgantown brought a storm of media attention, unexpectedly pitting her against the mosque's moderates.

Based on the gripping PBS documentary The Mosque in Morgantown, Nomani frames this local conflict as a means to explore the larger dilemmas facing American Islam. Read Less ^

Danny Pearl: The Truth Left Behind

Former Wall Street Journal reporter Asra Nomani was a friend and colleague of Wall Street Journal reporter Daniel Pearl. In fact, he and his wife were visiting her home in Karachi, Pakistan, when he went off for the interview from which he was kidnapped in 2002. Nomani played a key role in the investigation to try to find Pearl before learning that he had been brutally murdered. Six years later, Nomani is a professor of journalism at Georgetown University, leading the Pearl Project, a faculty-student investigative reporting project that is seeking answers to the questions of who really killed Pearl and why they killed him. The project's reporting has taken Nomani and her class figuratively onto the streets of Karachi and into the trenches of America's "war on terror." The Pearl case serves as a window into important issues related to terrorism, national security, foreign policy, and the challenges Pakistan faces in creating a civil society defined by rule of law.

The Fight for International Women’s Rights

"Thank you so much for making Asra Nomani's visit to Scripps such a memorable event. She was AWESOME! What a remarkable woman--she speaks with such conviction and honestly. Her engaging talk opened up some great dialog. Everyone is still talking about her remarks and how much they enjoyed meeting her. "

"Asra was absolutely fabulous. People have been stopping me in the hallways and dropping by my office to tell me how much they liked and were engaged and moved by her presentation."

"Outstanding.  Asra was great and everything worked very smoothly.  Thank you for your help."

"Many of my students discussed how Asra’s talk inspired them to think about their own decisions and sense of awareness. Several commented that despite the large crowd, Asra’s speaking style made them feel as if they were sitting around the dinner table listening to her weave personal experiences into a much broader global story."

Standing Alone: An American Woman’s Struggle for the Soul of Islam 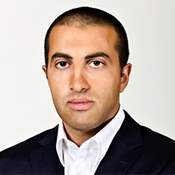