Professor, writer, special adviser to François Mitterand, founder and first president of the European Bank for Reconstruction and Development, Jacques Attali is now chairman of an international consulting firm based in Paris.  He also serves as founder and president of an international nonprofit organization using the Internet to fight poverty while focusing on structuring the microfinance sector. Read More >

A man of action and reflection, Attali has been regarded as an important economic theorist with degrees from the elite French “grandes écoles,” who has taught economics at several leading French universities.

He is the author of over thirty books on topics ranging from mathematical economy to music to novels, songs, short stories and theatre plays, translated into more than twenty languages. His main work in economics and sociology has centered on the main trends in human history including music, measure of time, medicine, property and other dimensions of human activities and their use to forecast the future.

In his book Millennium, published in 1990, Attali created the concept of “nomad society” to characterize the nature of future civilization. This theory of “nomadism” was not only a spark for the creation of the Java programming language by Bill Joy and John Gage at Sun Microsystems, but also for the titanium-clad Guggenheim museum in Bilbao, Spain, designed by architect Frank Gehry.

Before that, Attali created “Eureka,” the main European program on new technologies, and had launched an international action program against massive floods in Bangladesh.  He founded PlaNet Finance, and now is also Chairman of an investment bank and private equity vehicle specializing in the development of European IT start-ups, from software to genomics.

A brilliant and emotive speaker, Attali is a true “Renaissance Man.” He addresses a wide range of economic, political or philosophic subjects. He is fluent in English and French. Read Less ^

The Future of Europe 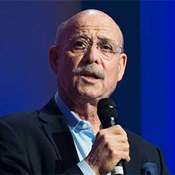 Author, Economic and Social Theorist, Advisor to the European Union and Heads of State & President of the Foundation on Economic Trends