Known as The Iron Cowboy for the signature cowboy hat he wears while running races so his five kids can see him coming from far away, James Lawrence is an ultra-endurance athlete who has pushed himself beyond what many doctors previously believed to be physiologically possible. In so doing, he has redefined both mental toughness and physical endurance. Read More >

James has been breaking records for years. In 2012, he completed 30 Ironman triathlons (2.4 mile swim, 112 mile bike, 26.2 mile run) in one year. No one had ever done anything close to this. In 2015, he did the unimaginable, completing 50 Ironman triathlons in 50 consecutive days in 50 different states, all while raising money to reduce childhood obesity.

It was an amazing physical feat, an astounding logistics challenge and a fair bit of chaos, all at the same time. He is the subject of the critically acclaimed Amazon Prime documentary; Iron Cowboy | The Story of the 50.50.50. But that wasn’t enough. In 2021, he pushed further, a lot further, beyond what doctors and physiologists thought was humanly possible, and completed the CONQUER 100…100 Ironman distance triathlons in 100 consecutive days, this time raising money to combat sex trafficking. That’s 140.6 miles per day, every day, for 14 straight weeks, for a total of 14,060 miles!

Originally a high school wrestler, James spent a decade in the mortgage and finance business before losing it all in the financial crisis of 2008. At rock bottom, his career as the greatest endurance athlete on the planet started quite humbly, struggling to complete a local 4-mile fun run with his wife, Sunny. Inspired by that experience, on that day he learned a lesson that has served him well ever since.

Today, James is one of the most dynamic, inspiring, larger-than-life keynote speakers in the world, having shared his astonishing story in 50 different countries across the globe reaching millions of people. He is a best-selling author. He continues to redefine the impossible in his own life, while teaching audiences around the world to do the same in their own lives. Read Less ^

While James is an astonishing athlete, sport is really not what he talks about. He is a master of mindset, focus, and of managing self-doubt.This is what he teaches. Read More >

James talks about the incredible power of hope and teamwork.He speaks about accountability, both to yourself and to your team. He shows his audience how to remove excuses from their own lives in order to unlock more ability.

In one of the most moving sections of Redefine Impossible, James reflects on his time with Dayton Hayward, a boy with Cerebral Palsy who loved to feel the wind in his face. James teamed up with Dayton and pulled, pushed, and carried him through an entire Ironman race. During that race, despite the increased physical demands, James gained a deeper understanding of perspective and privilege. As James shares in his presentation, “I remember looking at him many times that day, thinking Dayton can’t swim, he can’t bike, he can’t run...but I get to swim today, I get to ride today, I get to run today. Despite the pain, all of that is a privilege.”

Whether speaking to a room full of C-suite leaders, an international sales team, a finely tuned military group, or any one of countless professional sports teams, James’ expertise is in teaching people to change how they think in order to removeself-imposed limits Read Less ^

"James inspired our whole team with his message about the resiliency of the human spirit and the power our decisions can have over our circumstances."

“James blew our expectations away. We knew his story was amazing, but we weren't expecting such a polished, professional, and profound hour.” 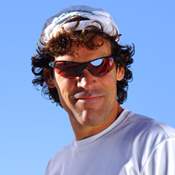