Jim Gray started his career as an intern and a video tape editor back in 1977. Working his way up the ranks, Gray established himself quickly and has been a network television and national cable sportscaster since 1981. He has worked with CBS Sports, NBC Sports, ESPN, ABC-TV, and is currently with Showtime, Fox, and Westwood One Radio. Read More >

On the radio, Gray has been the long time host of Monday Night Football for the NFL on CBS Radio Sports and Westwood One. Gray has also been the host and reporter for the NCAA Final Four. In addition to sports broadcasting, Gray was a national feature reporter for seven years for the Today Show on NBC. He has also written a number articles for The Los Angeles Times and Sports Illustrated, as well as feature articles for Inside Sports.

Gray has conducted thousands of interviews. Among the highlights are having interviewed Presidents Nixon, Ford, Carter, Reagan, Bush (41), Clinton, Bush (43) and President Obama. In addition, he has interviewed Soviet President Gorbachev as well as many other world leaders, celebrities and sports stars.

Throughout his adult life, Jim Gray has been involved in numerous charities around the country having served countless benefits as the master of ceremonies and devoting his time and energy to many philanthropic endeavors including The Boys and Girls Clubs of America, Special Olympics and the Multiple Sclerosis Society. Gray and his wife Frann, established the Jim Gray Scholarship Fund at the University of Colorado which grants scholarships at the University’s School of Journalism to top students, as well as to students who are the first in their family to attend a college or university. Read Less ^

An Evening with Jim Gray

In a multimedia presentation that’s sure to inspire and motivate, legendary sportscaster Jim Gray, an 11 time Emmy Award winner, gives audiences an exclusive behind the scenes look at the famous faces and stories he has covered over the years. Having conducted thousands of interviews with everyone who has achieved excellence in sports the past half century, as well as every U.S. President since Nixon, it's a thought provoking and humorous session. Gray shares what's been newsworthy, the things he’s witnessed and all kinds of antidotes and facts that the public has always wanted to know. Be prepared for an entertaining and informative evening!

"Dr. Gray was great!  He was funny and engaging and spent hours with us!  He was still chatting with members at midnight.  Thank you so much for all of your work to make this event a success!" 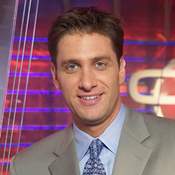