Political impressionist Jim Morris has all “authority figures” headed for the hills.  The rubber-faced Morris has become famous as a living political cartoon. Morris captures all of the attitude, optimism and befuddled essence of our nation’s leaders. Read More >

Morris, who has always been interested in politics, humor and impersonating authority figures discovered his talent while in high school, where he debuted over the school’s public address system issuing an unauthorized “early dismissal” as the principal. (All students were dismissed earlier than Morris was, on that particular day).

Morris goes far beyond mimicry, and well into the realm of the absurd! His ability to fully submerge himself within each character effectively suspends the disbelief of the audience.  His pointed satire then emerges from this frame of surrealism. His critically acclaimed, one-man press conferences showcase his eerily precise impressions of President George W. Bush , and former Presidents Clinton, Bush and Reagan, as well as journalists Tom Brokaw, Dan Rather, Ted Koppel…and many others…ranging from newsmakers to film and television stars past and present.

As usual, Morris was first on the scene to take on our new President.  However, life on the campaign trail did have its downside.  Rehearsing angry exchanges of rhetoric between candidates would often leave Morris susceptible to strange looks.

Morris has starred in comedy specials airing on ABC, CBS, Cinemax and HBO, and has appeared on Comic Relief, and The Tonight Show…and he provides the voices for “The EX-PRESIDENTS,” the critically acclaimed cartoon on Saturday Night Live.

In addition to occasional sparring sessions on round-table broadcasts such as CNN’s Crossfire, Capital Gang and Larry King Live, Morris has triumphed in several face-to-face encounters with the subjects of his humor.  Scenes of battle have included historic Ford’s Theater (“A Gala Salute to the President”), the traditional White House and Washington Correspondents Dinners and even inside the Oval Office. Read Less ^

An Evening with the Presidents

An Evening with the Presidents

"What a great speaker Jim Morris was.  He was entertaining, humorous, outgoing and a pleasure to listen to.  I appreciate your help in making this event a success. The attendees all had great things to say about Mr. Morris. I would definitely recommend him to any group."

"He was fantastic.  Without a doubt, he is one of the best speakers that we have had on our campus.  He is so down to earth, honest, self-deprecating, funny, and so much more.  Get him before any group that you can." 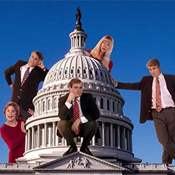