Jim Palmer is the only American League Hall of Fame pitcher to have won the Cy Young Award three times. In addition to being elected to the Baseball Hall of Fame (winning 92.6 percent of the 444 ballots cast), Palmer has established a career as a successful broadcaster. Read More >

As a boy, Palmer always demonstrated an interest and talent in sports. Although he was offered a scholarship to play basketball for UCLA, he signed with the Orioles in 1963 as a free agent, a wise decision that eventually brought him superstar status. Throughout the 21 years of his baseball career, Palmer only ever played in a Baltimore Orioles uniform and set many club records, including most wins, completed games, strikeouts, walks, and shutouts. In 1966, he became the youngest player to pitch a World Series shutout. During 1983, he was recognized as the only pitcher in history who had won a World Series game in each of three decades. In May 1984, after winning 268 games for the Orioles, Palmer asked for his release.

Palmer’s broadcasting career, which has included baseball coverage for ABC and play-by-play for Home Team Sports Orioles broadcasts, has spanned 13 seasons. From 1989 through 1991, he worked for the Orioles and WMAR-TV doing play-by-play announcing on Oriole games. In 1990, he lent his talents to ESPN as a commentator and expert analyst, earning him an ACE Award nomination.

Another one of Palmer’s ventures has been “pitching” underwear for Jockey International. Since the spring of 1975, he has traveled around the country, making over 500 in-store appearances and interviewing with radio and television stations. He has appeared in the company’s national print and television advertisements and on billboards in New York City’s Times Square. In addition, Palmer has served as a spokesperson for other products, given speeches for corporations, associations, and charitable organizations, and even acted in the film The Naked Gun.

Palmer has served for nearly two decades as the national sports chairman for the Cystic Fibrosis Foundation. A significant percentage of his and Jockey’s royalties from poster sales have been donated to the Foundation at his request. In 1991, the first Jim Palmer Celebrity Golf Tournament was established and it continues to be successful in raising money for the Cystic Fibrosis Foundation. In addition, Palmer has assisted in a variety of community charities surrounding D.A.R.E., Alzheimer’s, and arthritis. Read Less ^

The Pursuit of Excellence

Consistent Winning for the Long Run 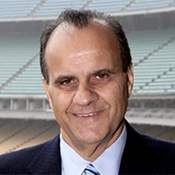