Johnnetta Betsch Cole, is an accomplished anthropologist, educator and museum professional; noted author and speaker on issues of inclusion, diversity, equity, accessibility, and inclusion; and a committed advocate for social justice. Read More >

Dr. Cole rose to national prominence as the first African American woman President of Spelman College. And later as President of Bennett College, making her the only person to serve as the president of both historically Black colleges for women in the United States. Over the course of her career, she has held teaching and administrative positions in anthropology, women’s studies, and African American studies at several major colleges and universities.

After retiring from academia, Dr. Cole served as the Director of the Smithsonian National Museum of African Art for eight years. Upon her retirement from the Smithsonian, she received the title of Director Emerita.

Following her years at the Smithsonian, Dr. Cole was a Principle Consultant with Cook Ross, a management consulting firm, where she co-led a Chief diversity Officer Forum and worked with various companies and institutions to transform the culture in their workplaces to be more diverse and inclusive. She was a senior consulting fellow at the Andrew Mellon Foundation where she worked on initiatives to increase inclusion, diversity, equity, and accessibility in art museums and higher education.

Dr. Cole has a long history of community service. She was the first African American to serve as the Chair of the Board of United Way of America. She recently served as the Chair of the Board and the Seventh President of the National Council of Negro Women. She currently serves as a member of the board of the Dr. Maya Angelou Foundation and the board of the A. L. Lewis Museum on Historic American Beach, Florida. She has also held leadership positions in a number of professional organizations, including the Association of Black Anthropologists and the Association of Art Museum Directors where she served a term as the president. She co-led the American Alliance of Museum’s Working Group on inclusion, diversity, equity, and accessibility. She served as Special Counsel of Strategic Initiatives at the Baltimore Museum of Art.

Dr. Cole has served on the corporate boards of Home Depot, Merck, Coca-Cola Enterprises and Nation’s Bank South. She was the first woman appointed to the board of Coca-Cola Enterprises and the first Black woman appointed to Merck’s Board. She is a member of Phi Beta Kappa, the American Academy of Arts and Sciences, a fellow of the American Anthropological Association, and a member of the Association of Black Anthropologists. She is a member of Delta Sigma Theta Sorority, Inc., The Links, Inc., and a Life Member of The NAACP.

Johnnetta Betsch Cole has authored, co-authored and edited several books and numerous articles for scholarly and general audiences. Her latest publications are Racism in American Public Life: A Call To Action and African Proverbs For All Ages. She is the recipient of numerous awards and has received 70 honorary degrees.

Dr. Cole began her higher education in an early entrance program at Fisk University and completed her undergraduate studies at Oberlin College. She earned an M.A. and a Ph.D. in anthropology with a specialization in African Studies from Northwestern University. In her published work, speeches, and community service she consistently addresses racism, sexism, and other systems of inequality.

Dr. Cole is married to James D. Staton, Jr. She is the mother of three sons and one stepson. She has three grandchildren and is a mentor to many young women and men. Read Less ^

The Business Case for Diversity & Inclusion

The Case for Diversity & Inclusion in American Higher Education

Everybody Can Be a Philanthropist

"I really do not have ANY words to describe the emotions I continue to experience just from reflecting on that evening. Dr. Cole was truly inspiring, and it was an absolute honor and delight to have the opportunity to engage with her. We received feedback from participants who were truly moved and motivated by her compelling keynote address. It was a pleasure working with you both over the last 18 months (who knew we’d be in this for so long together!). Thank you for being flexible, gracious, and just all around supportive as we worked through details and rescheduling of this event. It was well worth the wait!"

"I have received an ABUNDANCE of praise for Dr. Cole, starting with my CEO. She mentioned how no one has ever received the response for a message as Dr. Cole of all of our convocations. She said her message was well received and she’s had so much positive feedback via email and in person from our campus leaders. My colleagues in the administrative office said her message was relevant, on point and should have made everyone proud of who they were and should have walked away with a better understanding of those they work with. All and all, it was our privilege to have Dr. Cole…a once in a lifetime opportunity for most, if not all of us. Thank you again. It was a great event because of her!"

"You were most certainly correct in predicting that we would love Dr. Cole. She was a wonderful guest and speaker. Her connection with the people who had the pleasure of hearing her remarks and the timeliness of her message for the University of Tennessee was profound to say the least. Please do pass along my sentiments and continued appreciation of her willingness to travel to Knoxville to deliver the Goodrich Lecture. Without a doubt, it will always stand out in my memory as one of the best connections I have ever experienced."

- The University of Tennessee Knoxville

"Everyone on campus is still talking about your visit and the power of your presentation on Monday. Thank you for coming to Evansville and USI to share your words and spirit to honor Dr. Martin Luther King, Jr."

"Dr. Cole was intentional in her message, the audience thoroughly enjoyed her presentation and felt honored to be at an event where she was the keynote. Overall, Dr. Cole was lovely. Thank you as always. You guys deliver first class customer service and I appreciate you!"

"The event was a huge success with record attendance of 770 people this year. Dr. Cole was incredibly inspiring. Our guests hung on every word she shared. Dr. Cole has a way of making everyone in the room feel valued." 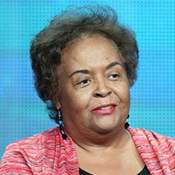