One of the world’s most influential and respected business thinkers, Dr. Jonas Ridderstråle burst onto the international scene with his bestseller Funky Business: Talent Makes Capital Dance—a Bloomsbury best business book of all time—and has remained at the forefront of the new generation of management experts since then. He was ranked number 23 on the 2009 Thinkers 50, the biennial ranking of management thinkers. Read More >

Dr. Ridderstråle is co-owner and chairman of the Swedish management group Mgruppen, one of Scandinavia’s leading providers of management training and development. He also acts as a trusted advisor and consultant to a number of multinational corporations and is a visiting professor at Ashridge Business School in England and IE Business School in Spain. In 2007, he was awarded the prestigious Italian award Nobels Colloquia for leadership in business and economic thinking. His research has been published in leading academic journals.

Ridderstråle’s books Karaoke Capitalism: Management for Mankind and Funky Business Forever: How to Enjoy Capitalism are also globally celebrated manifestos on how to make it in the new world of commerce. His latest bestseller, Reenergizing the Corporation: How Leaders Make Change Happen, explains how to lead change. His books have been translated into more than 30 languages and published in more than 50 countries worldwide.

Dr. Ridderstråle is a sought-after speaker who has spent the last decade giving people the competence, confidence, and courage to think, feel, and do things differently. In keynotes and workshops, he conveys his message with passion and energy, not only sharing tools but also inspiring his audiences to lead change. His combination of academic rigor, imagination, humor, and dynamic presentation style has inspired audiences from Moscow to Mumbai and San Francisco to Shanghai. His diverse client list includes Fortune 500 companies, major government bodies, sports teams, and trade unions.

Dr. Jonas Ridderstråle has an MBA and a PhD in international business and was named Sweden’s outstanding young academic of the year. He has appeared on CNN’s Global Office in an extended interview exploring the ideas behind his books and has been featured in Fortune, Fast Company, Time, The Financial Times, The Times, Stern, Newsweek, Paris Match, and many other publications worldwide. Read Less ^

Forces of Funk: What Drives Change?

The only way your business can respond to new challenges in a constructive way is by truly understanding why the socioeconomic landscape is changing so rapidly. The best leaders have always been business sociologists. They know that you find opportunity by analyzing context.

Speaker Jonas Ridderstråle has written and thought extensively about the seismic impact of changes in technology, institutions, and values. In this presentation, he talks about how we can benefit from advances in information technology and telecommunications as individuals and as leaders of corporations. He also discusses the implications of institutional deregulation on capitalism, nation states, political parties, companies, families, and others, and explains how the world’s shift from a geographically structured entity to one dominated by global tribes will influence life inside and outside our organizations.

Today, most people live, work, and do business in a deregulated global economy. More and more individuals enjoy the freedom of choice. In this presentation, speaker Jonas Ridderstråle discusses how we can capitalize on these new freedoms of movement by understanding shifts towards democratization, personalization, feminization, polarization, and many others.

The Future Firm: The Shape of Things to Come

The successful 21st-century corporation is fundamentally different from the one that dominated the industrial era. Gone are the days of the local and bureaucratic conglomerate.

Today, wealth is made with wisdom and customers are more demanding than ever. In a world with a surplus of products and services of similar prices and quality, the future firm must thrive on its ability to be different and add value in new ways.

Speaker Jonas Ridderstråle outlines where we should expect to find the firm of the future, what it will look like, and how it will operate. Learn more about how the company of tomorrow profits from changing circumstances and unpredictability. Find out why winners must be focused, innovative, heterarchical, and adept at leveraging themselves.

The Holy Grail of Business: Compete on Fitness & Sex Appeal

We remember the likes of Dell and Dylan for their ability to innovate and then continuously reinvent themselves. Successful corporations and individuals perfect the art of creating imperfections—the Holy Grail of commerce. In a deregulated world, the new business reality is a “double economy” with increasing differences between the best and the rest. Read More >

Instead of appealing to what’s average, you must explore what’s extreme. Those who stay in the middle of the road will be run over by modern monopolists.

Using examples from some of the most successful contemporary business organizations, speaker Jonas Ridderstråle describes two ways in which to build sustainable competitive advantages:

In today’s topsy-turvy world, a company is either quick or dead. Velocity is determined by a function of mass and energy: the lower the mass and the greater the energy, the faster an object moves. Since the early ’90s, most companies have been more or less obsessed with decreasing mass: managers have outsourced, offshored, downsized, and rightsized. Read More >

However, many organizations have neglected the other variable of the function: energy. The new challenge lies in reenergizing corporations. The ’90s gave us a competence-based view of the firm. Now the time has come to move on and profit from a new perspective that boosts the energy level of the enterprise.

Speaker Jonas Ridderstråle shares how to lead change by:

People can be extraordinarily courageous and make tough decisions only when they have something to believe in. The most successful organizations on our planet are all systems of faith. Produce change therefore requires a “corporate religion.” This overall purpose guarantees a clear direction and coordinated action. Read More >

Speaker Jonas Ridderstråle outlines the key elements that you should find in a great business bible and poses a series of questions to increase your organization’s competitiveness:

The +Factors: New Recipes for Success

To stand a chance at truly turning up after the downturn, we must radically rethink the traditional recipes for business success. The best leaders apply a positive logic of PLUS: moving beyond the person, the present, and the existing paradigm of management. Read More >

Using examples from some of the most successful contemporary corporations, speaker Jonas Ridderstråle presents four key ideas to help you turn up the volume and expand your business:

"Your Helsinki Idea Day Keynote was an awesome combination of world class stand-up comedy and eye opening management guruism (did I invent a new word?). Thanks again!"

"Thank you very much for participating in our Birmingham conference on Friday. The feedback from delegates has been truly exceptional. Your presentation was topical, thought provoking and relevant; it was exactly what was required and a revelation for our delegates. It was a pleasure to work with you and I hope very much we will work together again."

"Jonas was outstanding. He received a very long ovation after his talk and many people came to me after the dinner and said that he had been an excellent, thought provoking end to a good day."

"The response to your presentation was extremely positive! You challenged the crowd to think, and that is exactly what we wanted to achieve. Your energy and intelligence inspired our employees as well."

"Thank you very much for your attendance in our meeting last week. It was a successful presentation and raised a lot of discussion during the rest of the day. I am sure we can put many of your thoughts into use in our business."

"Thank you for contributing in such a remarkable way to the success of Ascent 2009. The Business Leadership Forum is a platform that thrives on original and stimulating ideas. Your keynote not only delivered amply on that score, but managed to connect with our audience on a personal level and leave behind many fruitful lines of discussion."

"Jonas has made an enormous impact on all of the executives he has met in Sony Europe. He has opened our eyes to new ways of looking at the world and how we need to adapt to face the future. He is innovative, challenging and entertaining in his approach and engages with people at all levels. He will make a significant difference to the way you view the future."

"Jonas brought new insights to the issues facing businesses and challenged the participants to think outside the box. The interactions were very useful and will help us to look at challenges facing us differently."

"We had an excellent performance from Dr. Ridderstråle. A real added-value!" 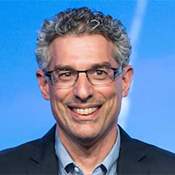