Juan González has emerged over the past 50 years as a nationally known Latino journalist, social activist, author, and public intellectual. He was a staff columnist for New York’s Daily News from 1987 to 2016 and has been a co-host since 1996 of Democracy Now, a daily morning news show that airs on more than 1,500 community and public radio and television stations across the US and Latin America. Read More >

His investigative reports on urban policy, race relations, the labor movement and Latin America have garnered numerous accolades, including two George Polk Awards for commentary, and in 2015 he became the first Latino to be inducted into the Society of Professional Journalists New York Journalism Hall of Fame.

González has also authored five books, including two acclaimed histories. One of them, Harvest of Empire: A History of Latinos in America has been required reading for two decades in college courses across the country, even spawning an award-winning documentary film that he narrated. His News for All the People: The Epic Story of Race and the American Media, co-authored with Joseph Torres, was a New York Times best-seller and a finalist for the Robert F. Kennedy Award. As a result, González was elected in 2016 a fellow of the New York Academy of History.

One of the original founders of the National Association of Hispanic Journalists (NAHJ), he served as the group’s president from 2002-2004. During that time, he spearheaded a nationwide effort by professional journalists to successfully challenge the Federal Communications Commission’s dismantling of media ownership regulations.

Even before he entered journalism, González was a well-known 1960s activist, as a key figure of the Columbia University student revolt of 1968, and later as a leader of the militant Puerto Rican group the Young Lords, and of the National Congress for Puerto Rican Rights.

Born in Ponce, Puerto Rico, he was raised in East Harlem and Brooklyn, New York. He received his Bachelor of Arts degree from Columbia, has been a visiting professor at Brooklyn College and New York University, and is currently the Richard D. Heffner Professor of Communications and Public Policy at Rutgers University. Read Less ^

A History of Latinos in America

Racial Narratives in the Media, Past and Present

The Hidden History of the Press by People of Color

Federal Policies and the Evolution of our Media System

How to Save Local News and Preserve Democratic Discourse

The Corporate Pillaging of Urban Public Space and Resources

Revolt of the Cities: How Urban Social Movements are Challenging Neo-Liberal Politics

"It is evident why Juan Gonzales is an award-winning journalist. His key note presentation on the causes of migration from Central America to the U.S was superb! His knowledge of the historical, current, and contextual factors was comprehensive, in-depth, and eye-opening! His talk was a very clear, captivating, and engaging. Mr. Gonzalez provided a perspective that is often not told, but critical to understanding, analyzing, and finding solutions to a very complex global crisis.

Drew Sullivan and his team at APB were amazing to work with in organizing the event that featured Mr. Gonzalez. From our initial conversation and throughout the entire process, communication was clear, timely, professional, and productive. I would highly recommend both Mr. Gonzalez as a presenter and APB for future events."

"Juan Gonzalez was terrific. He was very personable and friendly. He connected well with both students and faculty. He touched on relevant and pressing social issues. The history of race in the media was the primary topic, but he answered a lot of the students’ questions on a range of issues such as the current political campaign, the Puerto Rican debt crisis, the CIA's involvement in destabilizing overthrowing democratically elected governments in Central and Latin American, the Black Lives Matter movement, etc. Juan also stayed a little longer than his planned schedule. We are grateful for his time with us."

Harvest of Empire: A History of Latinos in America

Roll Down Your Window: Stories of a Forgotten America 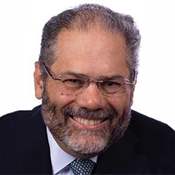