Maria Ressa is the co-founder, CEO, and executive editor of Rappler.com, an online news organization in the Philippines. Maria’s courage and work on disinformation and ‘fake news’ culminated in being awarded the 2021 Nobel Peace Prize in recognition of her “efforts to safeguard freedom of expression, which is a precondition for democracy and lasting peace.” Her numerous awards include being named Time’s 2018 Person of the Year and listed among its 100 Most Influential People of 2019. She has also been named one of Time’s 100 Women of the Year, BBC’s 100 Women 2019, and Prospect Magazine’s world’s top 50 thinkers 2019. Read More >

Maria advises organizations and corporations on corporate governance, values, and strategy. Her experience as a journalist and an entrepreneur in the digital world makes her a sought-after keynote speaker and panelist.

A journalist for over 35 years, Ressa was CNN’s bureau chief in Manila, before working as CNN’s lead investigative reporter focusing on terrorism in Jakarta. In 2012, she co-founded Rappler, an online news platform with an ethos of a small tech start-up, starting with a team of 12 young reporters and developers. Through the power of social media, Rappler has grown into the fourth-largest news website in the Philippines with over 100 journalists. Maria has been arrested on 10 charges related to exposing the Duterte government’s corrupt practices and was convicted of cyber-libel in June. She is out on bail pending her appeal but true to form, Ressa, vows to keep fighting.

More recently, Maria is part of the founding group of The Real Facebook Oversight Board – composed of 25 academics, journalists, and activists that will rival the social media platform’s board.

Maria authored Seeds of Terror: An Eyewitness Account of Al-Qaeda’s Newest Center of Operations in Southeast Asia and From Bin Laden to Facebook.

Maria was featured in the 2020 documentary A Thousand Cuts, which profiles her fearless reporting on the abuses of Duterte’s presidency, while also illustrating social media’s capacity to deceive and entrench political power.

Ressa has vowed to keep fighting and to continue Rappler’s journalism. Read Less ^

Fighting Back With Data

On the Importance of A Free Press | PBS News Hours

From Bin Laden to Facebook: 10 Days of Abduction, 10 Years of Terrorism

"On behalf of Mediacorp, we would like to thank you for participating in our CNA Leadership Summit 2022: Women Inspiring Change on International Women’s Day, Tuesday, 8 March. It was our privilege to have you as our speaker in our keynote fireside chat session. Your candid insight on journalism’s advocacy, viral disinformation, women’s empowerment and holding on to ideals are certainly insightful and inspiring at the Summit. We hope you enjoyed the session as much as we did."

"Maria was absolutely terrific. I have received messages of praise for her from viewers around the world who are sharing the program. I personally believe every citizen of the world should hear what Maria said."

"Maria’s interview was my personal favorite during the festival. We have received great feedback about it. She gave us a good range of both very specific examples when answering questions, and context by connecting those to the bigger, global picture, esp on freedom of the press as it relates to our predominantly American audience."

"We've never experienced something more meaningful, raw, thought-provoking as the session with Maria Ressa. She is a very rare combination of grit, passion, purpose, charm, and conviction. She is also a gentle force to reckon with, and is not only a delight to speak to, but expects to be challenged in a conversation. Only someone that open, intelligent, considered, and enlightened can do that. I would bring Maria in again in a heartbeat."

"Maria Ressa was truly engaging. The talk enlightened me in knowing that the fight of truth and facts in journalism is diverse and unique in different political landscapes. Ms. Ressa was able to draw similarities and differences with current governments in several countries. She showed how to use hope, courage, and action in tackling the truth. Her revolutionary ideas coupled with literature references give a fresh perspective such as smashing the idea of conventional happiness in finding the truth."

"Her soul has been refined to lean the facts, and her mind has been cultivated to become a journalist. From the focusing, ageless face and deep black shining eyes, you can feel the erupting energy inside her tiny body even from the screen. The energy can melt down fear and hesitating when it ignites the shadow of the world."

- The Foundation for Excellent Journalism

"Maria was a delight to work with and a stand-out speaker at the conference. Her speaking style is engaging and her story is compelling - and frightening. Thank goodness she injects humor from time to time! Our survey results are not all in yet, but I know from verbal feedback that she was a crowd favorite"

"Your keynote created goose bumps – that truly was a very special DLD moment. We really need role models like you to create the awareness about what’s going on in our world and there’s still so much work to do to ensure free speech and fight fake news."

How to Stand Up to a Dictator: The Fight for Our Future

From Bin Laden to Facebook: 10 Days of Abduction, 10 Years of Terrorism

Seeds of Terror: An Eyewitness Account of Al-Qaeda's Newest Center 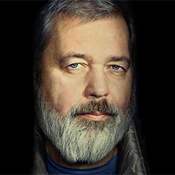