Mike Moore, the former Prime Minister of New Zealand and former Director-General of the World Trade Organization, has enjoyed a long and distinguished career in politics and acted as the driving force behind important changes within the WTO. A dedicated voice in shaping New Zealand’s political future, Moore will proudly serve his country as its Ambassador to the United States beginning in July/August 2010. Read More >

Moore became the youngest Member of Parliament ever elected in New Zealand in 1972, and actively participated on behalf of his country in international discussions on trade liberalization. As Minister of Overseas Trade and Marketing, he played a leading role in launching the Uruguay Round of GAAT negotiations. Moore was also the longest serving member of the New Zealand Parliamentary Select Committee on Foreign Affairs and Trade.

Moore's term at the WTO coincided with momentous changes in the global economy and multilateral trading system. He is widely credited with restoring confidence in the system following the setback of the 3rd Ministerial Conference held in Seattle in 1999. He also initiated important organizational changes within the Secretariat and introduced a range of strategic management techniques.

While maintaining the organization's focus on the core business of trade liberalization, Moore gave particular attention to helping poor countries participate effectively in the multilateral trading system. He introduced initiatives to enhance the WTO's image and to deepen its relations with civil society, resulting in 10 new members joining the WTO during his tenure, including China.

A distinguished author, Moore’s latest book is Saving Globalization, which describes how influential anti-globalization and isolationist factions have been strengthened due to worldwide economic crises, as well as the environmental, social and political inequalities in developing nations. Moore suggests looking at the “big ideas of history” in order to regain the path toward a prosperous global economy, including democracy and civil society. Nobel Peace Prize winner Jose Ramos-Horta praises Saving Globalization as “a book that should be read by anyone who cares about the future of our present civilization.”

Moore has been the recipient of many honors for his work in international relations.  He was awarded the Order of New Zealand, New Zealand's highest honor, in 1999. In 2002, he  received the Order of the Golden Heart of Kenya, the Chancellor's Medal from the University of Chile, the Business Week Award from Erasmus University, Rotterdam and the Government of Uruguay bestowed The Medal of the Oriental Republic of Uruguay, their highest national honor.

Widely respected for his leadership, experience and decision-making skills in launching multilateral trade negotiations, Moore is a speaker who brings a wealth of insights to any conference concerned with trans-global business. Read Less ^

Pro-Labor Can Be Pro-Global 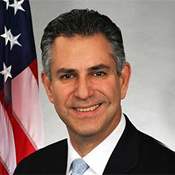