Samina Ali is an award-winning author, curator, and popular speaker. Her debut novel, Madras on Rainy Days (Farrar, Straus, Giroux), was the winner of France’s prestigious Prix Premier Roman Etranger Award and a finalist for the PEN/Hemingway Award in Fiction. Poets & Writers Magazine named it a Top Debut of the Year. Read More >

In the critically acclaimed global exhibition, Muslima: Muslim Women’s Art & Voices, Samina presents a groundbreaking collection of thought pieces and artwork from contemporary Muslim women who are defining their own identities and, in the process, shattering pervasive stereotypes.

Samina has spoken extensively at a wide range of universities, from Harvard and Yale Universities to community colleges, as well as at other institutions worldwide, including as a cultural ambassador for the U.S. State Department and a featured presenter at the Nobel Women’s Initiative 2017 International Conference. The recipient of fiction awards from the Rona Jaffe Foundation and the Barbara Deming Memorial Fund, she has been featured in The Economist, The Guardian, Vogue, National Public Radio (NPR) and elsewhere.

Continuing in the spirit of her widely popular TedX talk, “What Does the Qur’an Really Say about a Muslim Woman’s Hijab?”, Samina is currently writing a nonfiction book that weaves her personal story with a passionate appeal for women’s equality and justice. Read Less ^

TEDx: What Does the Quran Really Say About a Muslim Woman’s Hijab?

Allah is a Feminist

We have all witnessed the brutality with which some Muslim women are treated around the world: if she attempts to go to school, she’s shot in the head; if she attempts to drive a car, she’s jailed; if she attempts to take part in the political uprisings happening in her own country, to be heard and counted, she’s publically assaulted. On top of all this, there’s the forced veiling, honor killings that take place even in Western countries, and mandatory clitorectomies. It’s no wonder we’ve come to think of Islam as backward – even to believe that Islam isn’t a religion at all but a violent ideology! Read More >

Yet how many of these brutal practices are actually based in Islamic scripture? Turns out, none of them are. In this presentation, Ali argues that the only doctrine forcing Muslim women into inferior status is deeply rooted misogyny. Similar to her popular Tedx talk, which has received over 4 million views, Ali will take you on an enlightening journey through history to illuminate how Islamic doctrine granted women unprecedented rights and freedoms.

Indeed, Allah is a feminist. And, in this riveting talk, you’ll discover exactly why. Read Less ^

The Role of Muslim Women in Fighting Extremism

In 2013, Ali was the Curator for a revolutionary virtual exhibition sponsored by the Global Fund for Women. Entitled, “Muslima: Muslim Women’s Art & Voices,” this groundbreaking exhibition features hundreds of Muslim women from around the world – a compilation that is the first and only of its kind. Read More >

On one platform, Ali brings together thought leaders, artists, and activists such as: Shirin Ebadi, the first Muslim woman to receive the Nobel Peace Prize; Laleh Bakhtiar, the first American Muslim woman to translate the Quran into English; Sima Samar, the current Chairperson of the Afghan Independent Human Rights Commission; Elvira Bojadzic, who is trying to rekindle Islamic culture after the devastation of the Bosnian war; internationally renowned artist Laila Shawa; Ilyasah Shabazz, the daughter of influential Muslim American leader Malcolm X; Zainah Anwar, the founding member of the revolutionary Malaysian organization, Sisters in Islam; Tamsila Tauqir, the founder of the UK-based group, the Safra Project, which empowers Muslim lesbian, bisexual and trans; and female street artists like Egyptian SuzzeeintheCity who were instrumental in the Arab Springs.

Having met so many leading Muslim women, Ali has come to understand that a great litmus test for rising extremist ideologies is the treatment of women.

During this interactive presentation, you will be guided through this extraordinary exhibition by the curator herself. While popular media consistently presents Muslim women as downtrodden, Ali reveals a much different reality: how Muslim women are using their personal relationship to their faith to bravely combat hardliners in order to bring about peace.

This presentation is also a great example of how art can be used effectively for social change. Read Less ^

What Brain Damage Taught Me About Courage

At the age of 29, as a result of having a baby, Ali was left disabled. Although she was a patient at what was known then as UCSF Stanford Hospital, a preeminent hospital in the nation, the symptoms of her lethal pregnancy disorder were dismissed – such carelessness, Ali now says, isn’t all that surprising given that the U.S. is the only developed country where maternal mortality is on the rise, especially for minority women. Read More >

Twenty minutes after delivery, Ali experienced a grand mal seizure that cut off oxygen to her brain for 30 seconds. She fell into a coma. What followed was a nightmare: liver failure, kidney failure, pulmonary edema, single digit blood platelet count, blood that had stopped clotting, heart damage, a subarachnoid hemorrhage, and cerebral ischemia: areas in the brain where she was having hundreds of small strokes.

In this moving presentation, Ali speaks from the heart, sharing what her three-year long road to recovery taught her about courage, resilience, grace, and the incredible power of the human spirit. Read Less ^

The Art & Craft of Writing Fiction

Ali will read from her award-winning novel and talk about the writing process. She will also share how the act of writing her book actually helped her to recover from brain damage.

During the early 1970s, an era when the US was experiencing a brain drain and needed professionals from other countries, Ali’s father, an engineer, was granted a visa to come live and work in the United States. From Hyderabad, India, Ali’s parents immigrated to Minneapolis, Minnesota, a state that has come to be known not only for its Somalian refugee population but also for producing the first veiled politician to serve in the House of Representatives. Ali grew up in Minnesota and considers herself to be a Midwestern girl at heart. Read More >

In recent years, however, anti-Muslim sentiment is at an all-time high. In 2018, the Supreme Court upheld Trump’s travel ban on several predominantly Muslim countries based on national security.

Against this backdrop, Ali shares her personal story of what it means to her to be a Muslim woman immigrant to this country and how this country’s core values are not opposed to Islamic doctrines, as many believe, but are directly aligned with it. Read Less ^

In recent times, the resurgence of the hijab along with various countries’ enforcement of it has led many to believe that Muslim women are required by their faith to wear the hijab. In this informative talk, novelist Samina Ali takes us on a journey back to Prophet Muhammad's time to reveal what the term “hijab” really means — and it's not the Muslim woman's veil! So what does “hijab” actually mean, if not the veil, and how have fundamentalists conflated the term to deny women their rights? This surprising and unprecedented talk will not only challenge your assumptions about hijab but will change the way you see Muslim women.

The Crisis of Preventable Maternal Deaths

Globally, 800 women die every single day from preventable pregnancy complications. But if you believe that these deaths are occurring solely in developing nations, think again. The U.S. is the only developed nation where the maternal death rate is actually rising! Read More >

Here are a few sobering facts:

At the age of 29, Ali herself nearly died in childbirth — an entirely preventable outcome. Although a patient at a preeminent hospital in the nation, Ali’s doctors dismissed her symptoms, causing her to become so severely brain damaged that she was left almost as helpless as her newborn son. In this moving talk, Ali takes you along on the journey of her personal story, raising awareness on this incredibly urgent and underreported topic that impacts women across the world — 1.7 million women give birth each year in the U.S. alone and more than one third of them experience some type of complication that adversely affects their health — while also inspiring you with her miraculous story of recovery. Read Less ^

“As the U.S. Cultural Attache in Rome, I was fortunate to work with Samina Ali on a speaking tour around Italy. Samina inspires and empowers, truly a model for young women anywhere!”

- Diplomat in Residence for South Florida and Puerto Rico, U.S. Department of State

"Samina Ali is one of the most perceptive voices in Muslim America. I taught her book in my class at Harvard University and the students were so moved by it that I followed up by inviting Samina to campus. She is a gifted lecturer who was able to reach the audience by taking complex ideas about faith and making them easily accessible. She touched the audience's minds and hearts -- and was invited back again on several occasions. She's smart, insightful and speaks from the heart. Her message is one everyone needs to hear."

"I was on a committee that invited Ms. Ali to Yale to present at a symposium entitled “Knowing South Asia.”  She was one of three prominent writers featured and one session was dedicated entirely to a discussion of Madras.  The topics explored ranged from the book’s relevance to Women’s Studies, to its feminist themes, to its Indian-ness, to its Muslim-ness, to the author’s hybrid South Asian diasporic identity, to the role of music in the book and its literary musicality.  Ms. Ali discussed her textual themes and the issues she has confronted as an author with her particular background, but also weighed in on pressing Muslim issues, including her own political activism on behalf of women in Islam.  Her presentation was the high point of the entire day-long event and was the enthusiastic talk of campus for days and weeks thereafter.  Her warmth, passion, poise, smarts, wisdom, and accessibility resonated with people."

"Equally gifted as a curator, writer, moderator, and speaker, Samina’s sensitivity to the perspectives of other women and her unique ability to connect with her audiences on a deep emotional level, inspires and challenges us to confront stereotypes and perceptions. Her talents as a writer shone through in her deeply personal contribution to MAMA: Motherhood Around the Globe. As curator of Muslima: Muslim Women’s Art & Voices, she searched the globe to interview and profile extraordinary artists and leaders who are making a positive impact in their communities and globally. By weaving together the diverse voices, perspectives, and creativity of Muslim women artists and human rights advocates from a range of backgrounds, she ensured that Muslima represented a beautiful, powerful, and complex tapestry of voices. With her keen editorial eye, Samina shaped Muslima into a platform for Muslim women’s voices and art to break through persistent myths and prejudices. A fierce speaker, writer, curator, and activist, Samina is a powerful voice for greater understanding across what are all too often the differences that divide us." 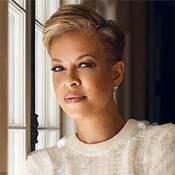