Steve Smith made an audacious childhood dream to be an astronaut come true despite multiple setbacks. He is one of America’s most experienced astronauts with 4 spaceflights and 7 spacewalks to repair the Hubble Space Telescope and to build the Space Station. At the conclusion of his career he was the third most experienced spacewalker in history and he twice received NASA’s highest honor, The Distinguished Service Medal. Read More >

Steve’s path to space was long – three decades – and arduous. That path included a life-changing near-death experience as a youth, an MBA and two engineering degrees from Stanford, elite national athletics success, tenure as an IBM Product Manager, a medical rejection by the Air Force, four astronaut application rejections by NASA, and a medical rejection by NASA. He relentlessly pursued his childhood dream.

At NASA he was the first in his class named to a flight and quickly rose to the Deputy Chief Astronaut leadership position – the number two Corps’ position – where he led the daily operations of the 125-member Astronaut Corps. He led multiple failure reviews, operations teams, and spacewalking crews. After his flight career, he served as a Diplomat living overseas for a decade and conducted NASA negotiations with European and Russian space agencies.

Steve now uses his one-of-a-kind mix of experiences to serve as a board director, venture capital advisor, and keynote speaker.  He credits hard-won lessons learned and a resulting set of principles, which he calls the “explorer’s mindset,” for giving him the creativity, will, and grit to achieve his goal and succeed as an astronaut, decision maker, and leader. In his speeches he shares the magic of spaceflight and motivates audiences to use the explorer’s mindset and practices to improve individual, team, and leadership performance in today’s dynamic, fast-paced business environment. Read Less ^

Path to Success: The Explorer's Mindset

An Astronaut’s Journey: How to Live Your Dream

Steve Smith has traveled fast… really fast: Mach 25. That’s 25 times the speed of sound. He did it only after a three-decade effort to fulfill a childhood dream expressed in several of his colorful childhood drawings. Along the way, NASA rejected him four times and even rejected him permanently (or so thought NASA) by medically disqualifying him. Steve describes what inspired him to persevere, providing advice for audiences of all ages on overcoming challenges and disappointment. He’ll also share what it was like to live his dream: riding the rocket on four space missions, performing seven spacewalks and traveling 16 million miles. Read More >

Through his personal stories, gorgeous photos, and a passion and skill for sharing his space experiences, Steve reveals how spaceflight can be everything from joyous to serious to humorous. Seeing our planet from a distance brought Steve both awe at its beauty and concern for its environmental fragility. He saw an island in a vast ocean. Steve’s perspective inspires us to be good to nature – and to each other. Read Less ^

Space is a dangerous and unpredictable environment. To cope with risky and dynamic environments, explorers throughout history have always relied on the critical attributes of creative thinking, resilience to setbacks and perseverance. These skills are what defines the “Explorer’s Mindset.” Read More >

Early in life, Astronaut Steve Smith was inspired to adopt the tenacity and habits of iconic explorers. He applied that mindset to guide him on his long path to NASA and to succeed and survive as an astronaut. In this speech, Steve will reveal how individuals and teams can and must adopt the explorer’s mindset so they too can thrive in today’s fast-paced, dynamic business environment. Read Less ^

Leadership at 17500 Miles Per Hour

Strong, effective leadership is a cornerstone of exploration ventures where leaders must make difficult decisions under pressure and lives are at risk. Leaders in the human spaceflight business process massive amounts of information in a complex, dynamic and fast-paced environment under the added constraints of budgets, stakeholders, schedules and growing foreign and domestic competition. Business leaders face a similar environment in today’s global economy and can benefit from exploration leadership techniques. Read More >

In this talk, Steve describes the practices of leadership in the hazardous and dynamic field of human spaceflight. He also reveals how these practices can be used by business leaders on Earth to become more effective in today’s competitive global business arena. Read Less ^

"His very impactful keynote speech for our sales conference provided memorable insights on how to improve business performance and how to lead a meaningful life. He shared management techniques and lessons learned from his successful missions to service Hubble and build the Space Station. Steve has the rare ability to make his remarks very personal even in a very large setting."

"What I appreciated most about Steve was his heart of service to our team. He didn't just come to speak, he came to connect and engage on an individual basis. He generously gave of his time to meet everyone he could. He went above and beyond for the entire time."

"Our folks were mesmerized by his stories. Hearing Steve's experiences and his insights from his unique vantage point was very motivational! I appreciated his energy, humility, and his deep perspective on life and his experiences. Steve shares a message of hope, born of his experiences as a true explorer."

"Steve’s excellent speaking skills and his unique background as an elite athlete, astronaut, Stanford MBA, and business thinker made him the perfect choice. He gave participants practical ideas on how to run an organization effectively (based on NASA’s approach) and provided easy to remember advice."

"Our audience was captivated by Steve’s stories. He gave each audience member a reason to pursue their dreams with vigor!  His eloquent description of Earth as an island in a vast ocean was deeply thought provoking……Steve inspired audience action that will help make our world a better place."

"An inspiring and captivating presentation in Lisbon to our 1500 educators coming from 7 countries. Your keynote was extremely well received by our delegates."

"Steve did everything he could to ensure the success of this event! Before the event, he was outside welcoming guests.  The audience was enthralled by Steve’s stories about his pathway to space and inspiring messages about following one’s dreams.  The Museum audio tech, who has worked with many speakers (including astronauts), said Steve was far and away the best speaker he had ever heard there!"

"We have received many glowing comments about [Steve’s] talk; in fact, 'the best ever' was heard more than once. He captured the audiences’ attention and imaginations, and made the entire presentation feel like an intimate conversation."

"Wonderfully engaging speaker and smart presenter who knows how to charm and entice the audience into the palms of (his) hands…." 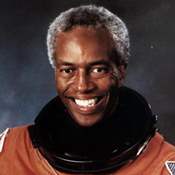