Mike Massimino is a former astronaut, the first person to tweet from space, a recurring character on The Big Bang Theory, a professor at Columbia University and a New York Times best-selling author. His highly engaging talks take audiences on a brilliant journey where seemingly unreachable childhood dreams are achieved, obstacles are overcome, and the world of science intersects with what is perhaps humankind’s most thrilling adventure. Along the way, this “down to earth spaceman,” known for his sense of humor, provides a unique and highly motivating perspective on teamwork, innovation, leadership and achieving the impossible. Read More >

Mike’s childhood space dreams were born the day Neil Armstong set foot on the moon. A working class kid from Long Island, he made it to Columbia and then MIT, only to flunk his doctoral exam and be rejected three times by NASA for poor eyesight. Driven by determination and commitment, he simply “trained” his eyes to be better. After working as an engineer at IBM, NASA, and McDonnell Douglas Aerospace, along with academic appointments at both Rice University and the Georgia Institute of Technology, Mike was finally selected as an astronaut candidate by NASA in 1996. He is the veteran of two space flights and the fourth and fifth Hubble Space Telescope servicing missions in 2002 and 2009. During the 2009 mission, he became the first person to tweet from space. Mike also holds a team record for the number of hours spacewalking in a single space shuttle mission. He shared his interstellar adventures in his critically praised New York Times best-selling book, Spaceman: An Astronaut’s Unlikely Journey to Unlock the Secrets of the Universe. Fans of The Big Bang Theory will recognize Mike for his six-time recurring role as himself on the CBS hit comedy. He has also hosted Science Channel’s The Planets and its special Great American Eclipse. Mike is featured in National Geographic Channel’s series One Strange Rock and is the host for Science Channel’s series The Planets and Beyond. He is a frequent guest on television news and talk show programs, including NBC’s Today Show, ABC’s Good Morning America, CNN, and Fox News. He has also appeared on the Late Show with David Letterman and on the Late Late Show with Craig Ferguson. Mike is currently a professor of mechanical engineering at Columbia University and the senior advisor for space programs at the Intrepid Sea, Air & Space Museum. He received a BS from Columbia University, and MS degrees in mechanical engineering and technology and policy, as well as a PhD in mechanical engineering, from the Massachusetts Institute of Technology.

Sharing a life story that emphasizes the power of determination, teamwork and overcoming challenges, Mike’s talks also celebrate the surreal wonder of space exploration itself. Posing questions such as, “Have you ever wondered what it would be like to find yourself strapped to a giant rocket that’s about to go from zero to 17,500 miles per hour?” Mike Massimino transports us to a world that few humans have experienced—inspiring all of us to achieve our dreams. Read Less ^

Mike’s dream of becoming an astronaut began when he was six years old watching television as Neil Armstrong took the first steps on the moon. The path to achieving this dream was wrought with unexpected challenges, failures, disappointments, and self-doubt. Mike was rejected three times by NASA including a medical disqualification which Mike overcame by teaching his eyes to “see better.” His persistence paid off with two missions on the Space Shuttle and four spacewalks on the Hubble Space Telescope. Sharing his own career and personal journey, Mike stresses that despite the obstacles, as long as you never stop trying, achieving your goal is possible.

Upon arriving at NASA, Mike discovered he was part of an organization and culture that put the success of the team and the mission above individual accomplishments. Teamwork and leadership were developed through the extraordinary experiences that Mike and his fellow astronauts shared during their training and spaceflights. Through these experiences, strong friendships and working relationships were forged that enabled Mike and his colleagues to complete astronaut training, overcome tragedy, and repair the greatest scientific instrument in space – the Hubble Space Telescope. Mike discusses how putting the team first as a member and leader led to success in his NASA missions and in life—and how to apply these lessons to your organization.

Mike’s second spaceflight was the final Space Shuttle servicing mission to the Hubble Space Telescope. On that mission, Mike was tasked with the most complicated spacewalk ever attempted: the in-space repair of a delicate scientific instrument inside of the telescope. A major miscue during that spacewalk nearly led to failure. But the ground control team and the astronaut’s in space worked together to come up with an innovative solution that saved the day and the mission. Mike explains how although not every problem has an obvious solution, preparation and innovation can help us overcome unforeseen challenges.

Climate Change & One Earth: An Astronaut’s View of Our Planet

The orbit of the Hubble Space Telescope is 350 miles above the Earth, 100 miles higher than the International Space Station. From that altitude, astronauts are able to see the curvature of our planet, and spacewalking astronauts are able to take in the magnificent views through their helmet visors with a 360 degree view of our planet and the surrounding universe. Mike describes his observations and feelings while viewing our planet, including its fragility and the importance of taking care of it.

"Mike was great. He did a fantastic job of engaging the audience with his stories and down-to-earth style (pardon the pun). He hit the mark on our key messages, but didn’t beat people over the head with them. He integrated them seamlessly into his stories.  I also appreciated that he hung around and chatted with a number of our colleagues after his remarks – even if it did nearly cause him to miss his flight.  All told, he was a hit."

"Everyone was thrilled with the meeting, especially your presentation. I have never received so much positive feedback after one of our All Staff meetings."

"Your inspiration, passion and down to earth style was nothing short of spectacular."

"Our leaders were inspired by your story and I believe walked away with a renewed sense of purpose and ready to focus on our new aspiration and goal. Your determination has encouraged us to think differently and be more courageous in our pursuits to impact society."

"Just wanted to take a minute and say thank you for your presentation yesterday. I have had numerous people stop me and tell me how much they loved your story –  how your message really hit home with our transformation."

"Your presentation was fantastic and highly rated by our audience.  On behalf of USA Rice, and the more than 750 conference attendees, please accept our warmest appreciation for your contribution to the quality and success of the meeting."

"Thanks again for doing a superb job today. Really top notch. They loved you. Couldn’t have asked for a better crafted talk."

Spaceman: An Astronaut's Unlikely Journey to Unlock the Secrets of the Universe 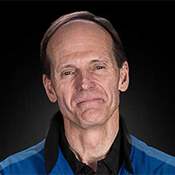