For Wanjiku "Wawa" Gatheru, caring about the environment started early. While farming with her mom and grandmother as a child, the conversations would often turn to saving the earth. The first-generation American of Kenyan descent became even more invested when taking an environmental science class in high school, when she learned that social justice and climate issues were deeply intertwined. Everything suddenly became personal. “It was in this call I learned that the environment had everything to do with me,” she says. Read More >

Her passion soon turned into activism. Today, Wawa is a  climate justice storyteller motivated to uplift the voices of those most adversely impacted by the climate crisis. She has become the voice of her generation, using the power of social media to share how communities of color and women have been adversely affected by climate change and the racist roots of the environmental movement.

Passionate about bringing climate conversations into untraditional spaces, Wawa works collaboratively alongside other creatives, musicians and culture shapers to bring climate justice to the mainstream. She is the first-ever activist board chair at the Environmental Media Association, an organization that brings climate to the entertainment industry.

Wawa is also the founder of Black Girl Environmentalist, a Rhodes Scholar at the University of Oxford, a Narrative Fellow at the All We Can Save Project and a recent Revolutionary Power Fellow at the U.S. Department of Energy, where she worked under the first-ever Deputy for Energy Justice to integrate energy justice in the federal landscape. She is also the youngest member of the Earthjustice Council and the first Black person in history to receive the Rhodes, Truman and Udall Scholarships.

Wawa has been recognized as a Young Futurist by The Root, a Grist 50 FIXER, a Glamour College Woman of the Year, a Victoria’s Secret PINK Purpose Project Winner, and has spoken about her work across the country. Read Less ^

How Generation Z Is Saving the Planet | The 2020 MAKERS Conference

Food Insecurity & How We Can Help

For Wanjiku "Wawa" Gatheru, founder of the Black Girl Environmentalist organization, her interest in food insecurity started early. She grew up farming with her mother and grandmother and conversations while they worked centered a lot around food justice and agriculture. It’s a subject that is truly dear to her heart. When she headed to college at The University of Connecticut, that concern continued. As co-founder of the UConn Access to Food Effort (UCAFE), Wawa created and distributed the first campus-wide food insecurity survey at any public college in the state. Her research has since been cited in U.S. Senator Chris Murphy’s “The Hidden Cost of College” report and referenced in the creation of both state and federal policy. As part of her grant, she also created pop-up food closets across campus that offered free, healthy groceries. In this talk, Gatheru shares how and why food insecurity continues to be a problem—more than 42 million Americans, including 13 million children, experienced food insecurity in 2021. And she discusses solutions to reduce food insecurity, increase access and how we can all easily help.

Everyone Can Be an Environmentalist

Wanjiku "Wawa" Gatheru has one main mission when it comes to her climate justice activism: to ensure the environmental movement is as inclusive as possible. She’s passionate about the interaction between climate justice, racial justice, antiracism and gender equality. And she continues to work on it every day. That’s why she created Black Girl Environmentalist, an online community for underrepresented voices in the environmental movement. “I founded my organization Black Girl Environmentalist because I’d like to see more people of color cultivate intentional communities around themselves,” she said in an interview with Green Matters. In this talk, Gatheru shares the story of how she created the Black Girl Environmentalist organization and why it matters, how she works with other environmental organizations and the opportunity we all have to help the earth—no matter how young or old—starting with our relationships and communities.

Wawa was fantastic! She did a wonderful job and was very engaging as a virtual speaker. Her message was clear and inspiring. We were very happy with her presentation. Thank you for helping us to arrange her virtual participation.

“Wawa’s story, experience, and words of wisdom were very much enjoyed and appreciated. She has a passion for her work and research and speaks with wisdom, confidence, and authority. A few of her statements were so bold and powerful, such as defining Global Warming as the grandchild of slavery. These are such important insights for young people to hear and understand, and to have faith in those who share these truths. Wawa is certainly one of those young people with that power.”

"We had a great event with Wawa. Our audience loved her talk and were very engaged asking questions and posting comments. A big thank you to Wawa for inspiring our crowd at a fitting time during Earth Month."

Want to Be an Environmentalist? Start With Antiracism 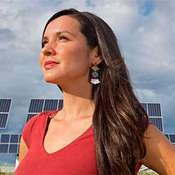