Since being granted clemency, and more recently a full pardon, Alice has committed her life to helping others and continuing to fight for criminal justice reform for the women and men who are still incarcerated. Through her leadership of TAG, Alice has devoted herself as a force for good, creating a cultural shift for restorative justice.

Her story received world-wide attention when Kim Kardashian West advocated for her release from a mandatory life sentence without parole. After over 21 years in federal prison for her first and only conviction in a nonviolent drug case, President Donald J. Trump granted her clemency on June 6, 2018 and more recently a full pardon on August 28, 2020.

Following her clemency, she has since been honored as one of four women designated as a “Women’s Right Defender” at the United Nations on International Women’s Day as well as a CAOC Advocate for Justice Award in 2019. She was recently awarded The Dream Blazer award by the US Dream Academy and a Community Advocacy award by the NACDL Foundation for Criminal Justice.

Alice has appeared on numerous media outlets advocating for criminal justice reform and has been a featured speaker and panelist at numerous instrumental events and summits.

Alice has been deemed a “catalyst” for the successful passage of the First Step Act; the most significant criminal justice legislation in recent history.

Alice Marie Johnson is a published author with her memoir, After Life: My Journey from Incarceration to Freedom, and is a proud mother, grandmother, and great grandmother living in Chandler, Arizona. Read Less ^

From Prison to Freedom 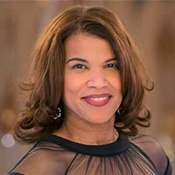