Swedish journalist, author and digital futurist Andreas Ekström wrote a bestselling book about Google – and has since been a leading commentator on all things digital around the world. His talks – always custom made to fit the audience – will give you mindblowing perspectives on who controls the money and the power as society goes digital by the minute. Read More >

Andreas Ekström is a senior staff writer and columnist at Sydsvenskan, a daily morning paper in Malmö, Sweden.

His passion? He calls it ”educating for digital equality”.

”I want to see a world in which we share the wealth – not only financially, but also in terms of knowledge and influence,” he says.

As a reporter with many years of experience covering the field, Ekström holds amazing insights in how the world of media, business and politics is affected by the main digital power players of the world. He is a highly sought after and seasoned speaker that has received excellent reviews across Europe on his thought-provoking lectures.

Ekström is an author of several books; The Google Code, published in 2010, made him a household name in the Nordics. His biggest international audience he reached through TED. His TED talks has reached over a million viewers to date and he recently won the breakthrough speaker of the year award in his native Sweden. Read Less ^

TEDTalk: The Moral Bias Behind Your Search Results

Andreas Ekström takes us on a journey that gives a whole new perspective on things we thought we knew, but perhaps never thought enough about.

Andreas will be starting a conversation on political and technical trust: As most everyone in the world is migrating all digital life towards a few power players – Google, Facebook, Apple, Microsoft and Amazon, often referred to as “the big five” – no business can truly move forward without looking at those corporations as such, but also the behavior around their products. And as always, Andreas talks about what digitalization does for money, power, trust, relationships and a lot more.

Delivering all the right answers? Absolutely not, he says. “But as a reporter by trade, I am good at asking the right questions, together with any group of forward-thinking individuals with different ideas, experiences and resources.”

Power & Responsibility: A People's Take on the Digital Revolution

What happens when a self driving car is facing a moral decision? Like who to crash into when in an accident? And where do we draw the line between ”good” services and ”bad” surveillance? Andreas Ekström maps out the main battle fields of the future: Legally. Socially. Politically. Financially. He is equipped with examples and observations that will get any audience to reflect on their everyday digital operations in a new way. Read Less ^

The Future of Media: Europe & The World

Andreas Ekström has been a commentator on all things media for most of his professional life. For over ten years, he was a columnist in the prestigious Journalisten Magazine. His open and non-dogmatic way of discussing everything from freedom of speech to copyright and the future of media business models has made him a natural part of any analytical discussion within the media industries and politics. Like few others, he can overview the history, the present and the future of his field.

"I’m like a child at Christmas. Andreas Ekström is probably Sweden’s best speaker."

"He is the journalistic equivalent of Karl The Mailman Malone. He always delivers."

"As ever great, engaging and powerful storyteller…brilliant every time." 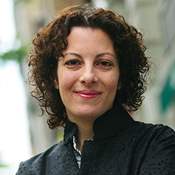