His nonfiction works include The Hacker Crackdown: Law and Disorder on the Electronic Frontier; Tomorrow Now: Envisioning the Next Fifty Years; and Shaping Things.

He is a contributing editor of Wired magazine, for which he writes on a wide range of topics, including politics, globalization and offshoring, technology and security, and the potential of NGOs. He also writes a weblog. During 2005, Sterling was the "visionary in residence" at Art Center College of Design in Pasadena. In 2008, he was the guest curator for the Share Festival of Digital Art and Culture in Torino, Italy, as well as the visionary in residence at the Sandberg Instituut in Amsterdam. In 2011, he returned to Art Center as visionary in residence to run a special project on augmented reality.

The Future of Our World

"The film we created with Bruce’s script and voice recording was very well received. It¹s uncommon for Nike to create a film longer than one or two minutes in length. This film is eight minutes and we were worried that, with all of the complex concepts, we would lose some of our viewers. It was completely the opposite, the audience was riveted. We all got great feedback and high-fives from the senior leaders at the event. Victory was had. Many thanks to Bruce for his input and for working with our challenging timings. And, thank you for your help as well!"

Tomorrow Now: Envisioning the Next 50 Years 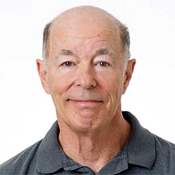