One of the three daughters of the late Rev. Oliver L. Brown who in the fall of 1950 along with 12 other parents in Topeka, Kansas, led by attorneys for the NAACP, filed suit on behalf of their children against the local Board of Education. Their case joined with cases from Delaware, South Carolina, Virginia and Washington, D.C. on appeal to the U.S. Supreme Court and on May 17, 1954, became known as the landmark decision; Brown v. the Board of Education of Topeka, Kansas. This case was legally named for Oliver Brown, i.e., Oliver L. Brown et. al. vs. the Board of Education of Topeka, KS. et. al. Brown died in 1961 before knowing the impact this case would have on the nation. Read More >

Cheryl is the Founding President of The Brown Foundation for Educational Equity, Excellence and Research, and owner of Brown & Associates, educational consulting firm. She has extensive background in education, business and civic leadership, having served on and chaired various local, state and national Boards. In addition, she has two decades of experience in political advocacy, public policy implementation and federal legislative development.

Her education includes a bachelor’s degree in Elementary Education, Minor in Mathematics from Baker University, Baldwin City, Kansas, a master’s degree in Guidance and Counseling from Emporia State University, Emporia, Kansas and an Honorary Doctorate of Humane Letters from Washburn University and an Honorary Doctorate of Education from the University of South Florida. She is the recipient of various awards and recognition for work in education and community service; presentations at numerous conferences, conventions and universities; and for her work with Congress and the National Park Service to preserve sites associated with the landmark U.S. Supreme Court ruling of 1954.

She has been a invited to the White House on seven occasions - In January 1994, May 1995, May 2003, June 2004, February 2005, June 2005, and May 2014, she was one of a group of individuals invited to receptions and dinner at the White House, (listed chronologically) in honor of Dr. King and the Children of Civil Rights Movement, the 75th Anniversary, U.S. Department of Labor, Women's Bureau, 49th Anniversary of Brown v. Board of Education, 40th anniversary of the Civil Rights Act., African American History Month, African American Gospel Music Month and the 60th Anniversary of Brown v. Board of Education. Read Less ^

Brown v. The Board of Education: The Legacy Continues

"The program was scholarly and illuminating beyond words. Please convey our deepest thanks to Cheryl. She delivered a powerful and personal story that left us all feeling much more informed on this significant topic."

“We are still reeling from the Kick off day and Mrs. Brown Henderson's speech. I have heard many people talk about how impactful she was and the network heads seem pleased as well. All I have is praise thus far. Thanks again for EVERYTHING.”

"What an amazing day yesterday! CBH is the bomb! The students, faculty and community members all loved her and I have heard all day how they wish she could have talked for two more hours…she really is an amazing lady. Thanks for taking this rookie through the paces and for all of your help and assistance in making this dream of mine come true."

"Ms. Henderson was a dynamic and engaging speaker with a powerful message. She is a lovely person who took the time to take pictures with attendees and continued to interact with people at the reception afterwards. We have had nothing but positive feedback and I couldn't be happier. Thank you so much for connecting us with such a talent!"

"The presentation for Brown vs. Board was not only informative, but very well executed. I have studied this historical case in the past, but Mrs. Henderson put a very personal twist on the matter, which really brought the case to life."

WATCH — A Brown v. Board Oral History: Cheryl Brown Henderson on Why Her Father Did Not Willingly Join the Historic Lawsuit and ‘Mom Was the Tipping Point’ 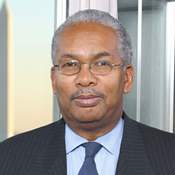