An Olympian and silver medalist from the London 2012 Olympic Games, a 7-time U.S. National Champion, a former world record holder and a 2-time Pan American gold medal winner, Dotsie Bausch is in her fifteenth year of racing. She has spent ten years as a member of the U.S. National Team and has competed in the biggest races around the world for her professional teams. Read More >

In 2007, Bausch tried track cycling for the first time and amazingly rode on to win two national titles on the track that same year. In 2010, Bausch teamed with Sarah Hammer and Lauren Tamayo to set a world record in the team pursuit and in 2011 teamed with Sarah Hammer and Jennie Reed to take silver at the World Championships. In August of 2012, Bausch became an Olympian and competed on the track in the 2012 London Olympic Games where she won a silver medal alongside her team mates in the women's team pursuit event.

While Bausch has scored major victories on the bike, perhaps her greatest victory came from resurrecting her own life from the depths of severe eating disorders, which threatened to take her life over a decade ago after a promising modeling career in New York City. It was during her recovery that she discovered her passion for cycling. Bausch's inspiring personal story has been chronicled in the media and she makes herself available to support women and men around the world in their battle to return to healthy eating and living habits through her highly sought after mentorship program. Additionally, Bausch serves as a mentor for young women eyeing the professional ranks for the Empower Coaching Systems development team, which she co-founded.

In 2002, Bausch launched a highly successful personal coaching business, which was originally women-specific. Through positive word-of-mouth, Bausch swiftly doubled her business and she began coaching men as well. Producing results for clients has enabled the business to grow each year. Over five years ago, she partnered with 2008 USA Olympic track cycling coach Andy Sparks to form Empower Coaching Systems.

Outside of cycling and motivational speaking, the Louisville, Kentucky native is also a color commentator for the NBC/Universal Sports Network. Bausch's reputation for being a knowledgeable coach, enthusiastic motivator and trusted resource for guidance, information and feedback is second-to-none. Her coaching philosophy stresses the importance of personalized training programs tailored specifically for the individual with a methodology that emphasizes a mind and body balance. Read Less ^

How do the mind and body balance each other? Olympian Dotsie Bausch believes that the body is a tangible reflection of the mind and the mind is a hidden reflection and manifestation of the body. When we understand the mind/body connection in this way, we are in the position to make the most of it in terms of personal growth, self improvement and motivation. In this speech, Bausch provides audiences with a launch pad of powerful tools to create change positively. She warns of the internal danger of negative thinking, teaching you how to break free of these thought patterns and live the life you have imagined!

The Courage To Be Imperfect

Having the courage to be imperfect allows your truest, most remarkable self to be revealed. Dotsie Bausch has firsthand experience with these concepts and knows you must first become vulnerable. Bausch found great POWER and SOLACE out of a wretched, near-death life in VULNERABILITY. Read More >

In this speech, she explains how it shaped every part of who she is today and how it can transform your life. Read Less ^

This is speech is about Dotsie Basuch’s journey in choosing life over death. She focuses on channeling the critical components of her personality that were consumed by a debilitating eating disorder, sharing how she used her faith and strong will to become an Olympic champion.

"When I invited Dotsie to be a speaker at the 2012 Renfrew Center Foundation Conference for Professionals on the topic of exercise and eating disorders, she was training for her Olympic debut in the Team Pursuit. It is a testament to her unassuming poise and ardent candor that nothing changed in her talk once the silver medal graced her neck, other than her humble acknowledgement of Olympic success. Perhaps this is because humility and courage informed, if not saved, her life years prior as she recovered from the “sole pursuit” of thinness and perfection in a ten-year battle with anorexia nervosa. As one who’s similarly stared into the sun and survived, it is not cliché to say we look through life’s lens with new eyes. Few have the capacity, passion or compassion to articulate this experience and fully register with an audience. This is what makes Dotsie precious as a speaker, athlete and friend. In her radiant presence, we feel felt. The impact is illuminating."

"The Santa Barbara Athletic Round Table featured Olympic cyclist and medalist Dotsie Bausch at our annual Women and Girls In Sports Luncheon celebrating the lasting impact of Title IX and its influence on our local athletes. Dotsie reached out and touched the hearts of our 400 high school and college athletes with her frank talk about overcoming an eating disorder and achieving her life goals through passion, persistence and the courage to be imperfect. We have received incredible, strong positive feedback on her presentation from the schools, the athletes, the coaches and our sponsors. We would highly recommend Dotsie for any future speaking engagement." 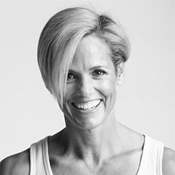