Dr. Frank Luntz may be the most widely recognized pollster in America. As a premier communications expert, Dr. Luntz is the coveted voice the political world turns to when it comes to understanding what people are thinking. Dr. Luntz is recognized globally for his political knowledge and his sought-after skill as a focus group leader. Read More >

Over the past 20 years, Dr. Luntz has written, supervised, and conducted more than 2,500 surveys, focus groups, ad tests, and, most notably, dial sessions in which respondents provide on-the-spot feedback to live events. A winner of the Washington Post’s coveted “Crystal Ball” award for being the most accurate pundit, Luntz’s focus groups have become so influential that presidential candidate Barack Obama noted “When Frank Luntz invites you to talk to his focus group, you talk to his focus group.”

More media outlets have turned to Frank Luntz for focus groups and consulting than to any other political pollster. The "Instant Response" focus group technique he pioneered has been profiled on 60 Minutes, Good Morning America (on Election Day), and on PBS's award-winning Frontline. He also served as a consultant to the NBC hit show The West Wing.

His enthusiasm for the art and science of language creation has prompted him to write about the power of language for The Wall Street Journal, The New York Times, Los Angeles Times, Financial Times, The Times of London, and The Washington Post. He is also the author of three New York Times bestsellers: Words That Work: It's Not What You Say, It's What People Hear, which offers a behind-the-scenes look at how the tactical use of words and phrases affects what we buy, who we vote for, and even what we believe in. He is also the author of What Americans Really Want... Really: The Truth About Our Hopes, Dreams and Fears (2009) and Win: The Key Principles to Take Your Business from Ordinary to Extraordinary (2011).

Luntz puts on a show for audiences, having worked with a spectrum of media outlets and supervised more than 400 surveys for political and corporate clients around the world. Using cutting-edge technology, he provides a mini-masterclass on data – always with his pulse on the electorate and the consumer. Read Less ^

Focus On Your Organization

Organizations worry about their bottom line, but sometimes forget that bottom lines are often affected by how their customers and vendors perceive their products or services. And many organizations or companies ignore this at their peril. But changing attitudes and opinions is difficult. That is where renowned pollster Frank Luntz comes in. Dr. Luntz will bring your customers to you. He can conduct a focus group in front of any size audience. There is perhaps no better way to "get employees on board" than to let them listen directly to what their customers think. Dr. Luntz uses cutting edge technology to show the audience, in real time, exactly how customers react to company communications. From ad testing to sales training to virtually any other interaction with customers, it is impossible to ignore the impact of these sessions on their audience.

It’s Not What You Say, It’s What People Hear

What’s behind winning campaign slogans and career-ending political blunders? Why do some speeches and advertising campaigns resonate and endure while others are so quickly forgotten? The answers lie in the way words are used to influence and motivate, the way they connect thought and emotion. In this engaging and humorous presentation, based on his book, Words that Work, Dr. Frank Luntz shares his wisdom on how the words we choose can change the course of business, of politics, and of life in this country. He has used his knowledge of words to help more than two dozen Fortune 500 companies grow. He'll tell us why Rupert Murdoch's six-billion-dollar decision to buy DirectTV was smart because satellite was more cutting edge than "digital cable," and why pharmaceutical companies transitioned their message from "treatment" to "prevention" and "wellness." He offers a behind-the-scenes look at how the tactical use of words and phrases affects what we buy, who we vote for, and even what we believe in. With advice like "The Ten Rules of Successful Communication" and "The 21 Words and Phrases for the 21st Century," he examines how choosing the right words is essential.

What's REALLY On The Mind Of America

Most public opinion experts can only tell you what they think is on the minds of ordinary Americans, but Dr. Frank Luntz lets ordinary Americans speak for themselves. Through thousands of hours of intense direct response/focus group dial testing, Dr. Luntz has his fingers on the pulse of every issue Americans talk about today. Dr. Luntz will provide expert insight and analysis that can help you, the business leader, the politician, or just the average citizen, understand the thoughts and feelings of the average American

"Dollar for dollar, Frank was the best speaker we've had in a decade. His give-and-take with the audience was refreshing and very funny. He understands the American people better than anyone, but more importantly, he has an effective presentation style that conveys his knowledge with wit and wisdom."

"Frank Luntz knows how to engage a crowd. His speech was precise, funny, and knowledgeable and is able to convey his message with humor and charisma. He's one of a kind and truly knows how to deliver a message."

"Frank walked into a room filled with the top business people in California and just took it over. The energy and excitement he brought to his speech was electrifying. The audience was really involved and nobody wanted to leave." 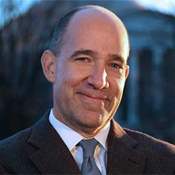