Geoffrey Moore is an author, speaker, and advisor who splits his consulting time between start-up companies in the Wildcat Venture Partners portfolios and established high-tech enterprises, most recently including Salesforce, Microsoft, Autodesk, F5Networks, Gainsight, Google, and Splunk. Read More >

Moore’s life’s work has focused on the market dynamics surrounding disruptive innovations. His first book, Crossing the Chasm, focuses on the challenges start-up companies face transitioning from early adopting to mainstream customers. It has sold more than a million copies, and its third edition has been revised such that the majority of its examples and case studies reference companies come to prominence from the past decade. Moore’s most recent work, Zone to Win, addresses the challenge large enterprises face when embracing disruptive innovations, even when it is in their best interests to do so. It’s time to stop explaining why they don’t and start explaining how they can. This has been the basis of much of his recent consulting.

Irish by heritage, Moore has yet to meet a microphone he didn’t like and gives between 50 and 80 speeches a year. One theme that has received a lot of attention recently is the transition in enterprise IT investment focus from Systems of Record to Systems of Engagement. This is driving the deployment of a new cloud infrastructure to complement the legacy client-server stack, creating massive markets for a next generation of tech industry leaders.

Moore has a bachelors in American literature from Stanford University and a PhD in English literature from the University of Washington. After teaching English for four years at Olivet College, he came back to the Bay Area with his wife and family and began a career in high tech as a training specialist. Over time he transitioned first into sales and then into marketing, finally finding his niche in marketing consulting, working first at Regis McKenna Inc, then with the three firms he helped found: The Chasm Group, Chasm Institute, and TCG Advisors. Today he is chairman emeritus of all three. Read Less ^

The third edition of Crossing the Chasm was published in January of 2014. Drawing on his best-selling books, Crossing the Chasm and Inside the Tornado, Moore traces the path markets take through the Technology Adoption Life Cycle and explains what vendors must do to succeed at each stage.

Caught between the Darwinistic forces of globalization and commoditization, and the demon of corporate inertia, established enterprises are increasingly challenged to innovate. Moore leverages his life cycle models to outline a broad range of innovation strategies and align them with a category’s current stage of market development.

When processes no longer result in marketplace differentiation, they go from being core to context, but all too many continue to consume the bulk of an enterprise’s resources. Building on the material in his most recent best seller, Living on the Fault Line, Moore explains how the resulting decline in revenues and margins can be overcome through aggressive resource reallocation and human capital renewal.

Navigating the resources of the global economy is not for the faint of heart. But as competitive pressures increase, enterprises must find ways to leverage the work of others so that they can focus more and their unique value-adds. Drawing on recent consulting engagements with leading-edge firms, Moore outlines the current state of the art.

Orchestrating the Stack: Next-Generation Strategies in Enterprise IT

Enterprise IT has consolidated around a handful of gorilla vendors, each of which is looking to increase its territory as computing architectures move beyond the current Internet-enabled client-server approach to a future platform built up from modular services and next-generation languages and protocols. Moore outlines each gorilla’s game plan to give CIOs and other interested industry observers an early start in handicapping this race.

Selling disruptive innovations requires a special approach as markets are self-organized to privilege incumbents and exclude challengers. The key is to win over the ever-elusive executive sponsor. Drawing on six years of experience as a venture partner at Mohr Davidow Ventures, Moore explains how start-ups have learned to get past the gatekeepers and capture the attention and support of line-of-business executives.

As markets globalize, and current offerings commoditize, more and more companies are looking to changing business models as a source of new competitive advantage. But not all business models can cohabit in the same company. Drawing on recent consulting engagements with leading-edge firms, Moore surveys the landscape of business models and lays out rules of engagement for companies expanding into unexplored territory.

While it is generally acknowledged that company culture has a huge impact on the success of enterprises, there have been few models that help executives understand and leverage culture as part of the management toolkit. Building on the material in his most recent best seller, Living on the Fault Line, Moore lays out models and methods for a no-nonsense approach to the topic that has deep implications for leadership and change management initiatives.

Five Stages of Marketing Maturity: Where is Your Organization?

Based on twenty-five years of marketing experience in the high-tech sector, Moore lays out his Marketing Maturity Model, tracing the evolution of a start-up’s marketing from a nice home page to global domination. Along the way he gives audience members a complete set of diagnostics to see where their organization fits in the progression and what elements they might want to focus on next.

Core vs. Context: The Primer

The core versus context model is described in chapter two of the book, Living on the Fault Line–core being anything that contributes directly to competitive differentiation and leads to customer preference in purchase decisions. Context is everything else – all the things that you or your company or product must do to pass muster but which do not differentiate you from others in the same market. The key lesson for investors is that the New Economy, with the help of the Internet, enables companies as never before to outsource their context in order to focus on their core enterprises.

Escape Velocity: Free Your Company's Future from the Pull of the Past 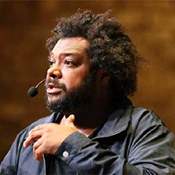