Founder of Project I Am, Author, Genz Influencer & Super Hero

Jahkil Naeem Jackson is a 2-time best-selling author, social entrepreneur, student athlete, influencer and founder of Project I Am, a nonprofit organization he created when he was eight years old to build awareness to homelessness. Now 15, Jahkil has already earned a reputation for himself as one of the world’s most influential changemakers by President Barack Obama. Jahkil has made it his mission to assist those in need who are residing on the street and in shelters while engaging other youth to become change-agents. Jahkil's efforts have raised $400,000 and have impacted nearly 100,000 people in need. Read More >

Summer 2016, he was named a Youth Ambassador for Heartland Alliance, one of the world’s leading anti-poverty organizations, working in communities in the U.S. and abroad to serve those who are homeless, living in poverty, or seeking safety. Winter 2017, Jahkil became a member of the WE International Youth Council, a movement that exists to make the world a better place. WE Day is also a celebration of youth making a difference in their local and global communities. Jahkil was a guest speaker for 2017 and 2018. Fall 2018, Jahkil became the youngest member of the Independent Youth group which empowers today’s youth to become tomorrow’s business leaders and entrepreneurial innovators. Jahkil was named Vice Chairman of the 2019 KidBox Youth Board of Directors, the 2020 Chairman of the Dreams for Kids Youth Executive Board and named one of BET’s 15 under 15.

Additionally, Jahkil was also tapped to participate in Disney’s Be Inspired Black History Campaign, Lebron James’ #AlwaysBelieve 2018 campaign, Nike’s Until We All Win & You Can’t Stop Our Voice campaigns and is now a Marvel Super Hero and CNN Hero Young Wonder. His philanthropy has also led to partnerships with the NBA, Steve & Marjorie Harvey Foundation, Invisalign, Crate & Barrel, The Gap and is a Tedx Speaker. Read Less ^

How to Motivate & Inspire GenZ at Work & Beyond

Bridging the Gap Between Youth & Adults: How to Encourage & Celebrate Youth Voice

"Jahkil’s assembly on bullying had a tremendous impact on my students. Before he came I had several issues with bullying in my classroom, but when they went to the assembly, not only did they see a peer that they look up to as a super star, it was very engaging, the music had them going, they took a pledge against bullying and gave testimonials about how they felt about bullying. After that my students treated each other so much better. I really appreciate you for taking the time to come speak to the students at my school. It made a tremendous impact."

"Jahkil was a powerful speaker and workshop leader with many of our children that attended the virtual book fair that presented Jahkil in the series that we had. He was extremely relatable, extremely clear and concise as to where he thought the conversation should go and pointed the children in the direction of the narrative as far as his book was concerned and the ability to advocate for oneself and to chase your own individuation dreams. He is a speaker and a workshop leader that we would welcome back anytime. We were really honored to have him."

"Legacy Charter School thanks Jahkil Jackson for coming and doing our social entrepreneur program. He was so informative, creative and had so much imagination. Our scholars loved him. The program brought so much joy to our students and our school community.  We thank you for such a strong curriculum and frameworking content. We look forward to another year with Mr. Jahkil Jackson. Thank you for your youth leadership."

"I’ve had the pleasure of working with Jahkil Jackson since he was in 5th grade. Recently he worked with students in grades 5th – 8th on the importance of social entrepreneurship. As a freshman in high school, he instructed the program himself and he was a very excellent speaker, he was very clear, the students knew exactly what to expect and he was able to communicate with passion and conviction about the issues that he cares about most. Jahkil has been an asset to our student body for over 5 years."

"In December of 2021 I was looking to find a young entrepreneur for our annual celebrate youth entrepreneurship events and I came across an article about Jahkil Jackson. Upon reading his story, I instantly felt connected with his message and thought that he would be an incredible addition for our students to learn from and be motivated by. Jahkil not only met but fully exceeded the expectations that I had for this event. All of our students left feeling motivated and inspired by seeing someone who not only look like them but who’s message and impact made such a huge difference in the world. Jahkil was engaging, well prepared and quick to respond to questions asked of him by the students. Jahkil was such a huge hit with the students and administrators that they are still talking about him to this day so much so that we are having Jahkil back to speak at another large conference event for adult educators. If I had to find one word to describe what your students or group will get from hearing Jahkil’s message, I would say Impactful. If you are looking for a motivating, impactful youth entrepreneur speaker, I would highly suggest Jahkil Jackson, you will not be disappointed."

Don't Wait To Be Great: A kid navigating the world of philanthropy, sports and social entrepreneurship 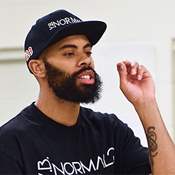