Growing up in a single-parent home on the south side of Chicago, Justin Shaifer spent his days goofing off, acting up and excelling as the class clown. Although secretly fascinated with science, he never had the opportunity to express that excitement—it just wasn’t cool. That was until his mom made him sign a contract at 14 years old promising he would figure out a way to pay for college. Read More >

While searching for scholarships, Shaifer quickly realized there were pools of money around STEM (Science, Technology, Engineering, Math) Education. And he made good on that contract. Shaifer earned scholarships from NASA and NOAA that covered 100% of his tuition and room and board at Hampton University. He graduated with a degree in marine and environmental science, earning the department’s highest GPA while also serving as student body president.

Today, Shaifer is so much more than cool. An entrepreneur, speaker, top voice in technology and STEM advocate, he travels the country as the role model he never had, making STEM dope, he says. Inspired to pay his success forward, Shaifer co-founded the STEM Success Summit, a large-scale conference for diverse STEM students that secured sponsorships from Best Buy and General Motors. He also co-founded Beyond: A gamified platform that helps diverse students learn tech skills while earning prizes from their favorite brands. Shaifer has hosted science TV shows with WGBH, the Travel Channel and Al Roker Entertainment.

Known as “Mr. Fascinate,” Shaifer has made it his life’s work to bring his passion for STEM disciplines to the next generation, especially kids who are typically underrepresented in elite science-based careers. From his viral TEDx talk, "How to Speak Generation Z," to his body of curriculum development work, Shaifer is a leading figure in STEM education and diversity. His energy never fails to get audiences interested in hearing what he has to say. Read Less ^

Who is Mr. Fascinate

TEDx: How to Speak “Generation Z”

The Importance of Diversity in STEM

In the world of STEM, Justin Shaifer sometimes feels like an anomaly: He’s one of the few African-American men who has worked in these areas. That’s why he’s on a mission to make sure there are many more people of color joining these fields, too. In this inspiring talk, Shaifer shares his journey — from growing up on the south side of Chicago with little access to STEM programs to his achievements today. As the founder of the STEM Success Summit — a large-scale recruiting conference for diverse college students and young professionals — Shaifer provides insights on what it takes to overcome adversity and best practices for diverse groups to stay ahead of the curve.

The Future of Technology

With his unique experience working in television and with industry leaders and leading-edge innovators, Justin Shaifer has been on the frontlines of the future — learning about pioneering technologies, like 3D printing, artificial intelligence, genomics and commercial space flight. In this captivating, forward-thinking talk, “Mr. Fascinate” helps prepare corporate stakeholders on the newest technological breakthroughs and how they can make the most of them, as well as who they need to hire and train to prepare for the future for their companies.

How to Lead Generation Z

In his popular TEDx talk, “How to Speak Generation Z,” Justin “Mr. Fascinate” Shaifer taught audiences how to effectively engage a generation who grew up with iPads and smartphones in their hands. His insights were based on his work as the co-founder of the STEM Success Summit, a large-scale recruiting conference for diverse students and young professionals. Now, Shaifer has taken his experiences a step further — creating a workshop for corporate stakeholders to learn how to hire, recruit, market and retain Gen Z workers — one of the most diverse generations in our history. In this talk, Shaifer shares some of these best practices, so that managers and business owners can understand how to lead the next generation as they enter the workforce.

Why STEM Is Dope

Boring lectures and uninspiring teachers often ruin students’ perceptions of STEM. Justin “Mr. Fascinate” Shaifer changes all that for students. In this keynote, Shaifer shares his own personal story of overcoming adversity — growing up on the south side of Chicago, where STEM was considered anything but cool — to the amazing heights he’s been able to reach in his own career. Students will learn about real-life experiences of modern STEM professionals, and the prospects of STEM scholarship opportunities and careers. It’s a refreshing perspective on STEM from an unconventional voice, who entertains, educates and inspires.

Bring STEM to Class: A Practical Guide for Educators

Most teachers recognize the importance of 21st-century skills for the modern workforce, but few effectively translate them into lesson plans for their students. Based on Justin's professional experience in multiple STEM disciplines and STEM youth development programs, this tech-savvy workshop walks educators through unique lesson plans to engage students in STEM.

This talk, targeted at corporate practitioners, highlights some of the greatest disruptive innovations happening in Web 3.0 today - NFTs, DAOs, Smart-Contracts, and much more! Shaifer shares why the metaverse and other decentralized technologies are primed for unprecedented inclusivity - and how we can leverage these platforms to create the most equitable technology to date.

"Justin is such a dynamic and energetic speaker. I truly enjoyed his talk at the Smithsonian Earth Optimism Summit, he opened my mind to the importance of YouTube and Memes to Generation Z students. Book him for your next event, he will not disappoint!"

"The event was a success and Justin was the perfect person to launch this year’s GSC. His personality, his work, and his engagement really embodied the spirit of the green schools movement. Audience feedback has been overwhelmingly positive. Thanks again for all your assistance and support 😊"

"I want to express my gratitude to Justin for the amazing job he did today. The students and my colleagues enjoyed the discussions immensely. Justin masterfully managed the panelists, attended to audience questions and comments and still stayed within the theme of the discussion. Thank you from the bottom of our hearts. And APB, I appreciate your patience given the fluidity and uncertainty of these times. I look forward to working with you again in the future."

"...You helped us kick off a project that will no doubt bring value and inspiration to not only A&T but also the broader public...You came through and really blessed it! Thank you for your contribution. We appreciate your thoughtfulness, professionalism, and dedication to the vision. We are still inspired and on a high from everything left in the room which we are looking forward to sharing with the world."

"Justin is such an amazing speaker and his message really resonated with students. We really enjoyed his talk on "STEM is Cool". I highly recommend him as a keynote for any event!"

“It was really a great success and he was super easy to work with. It wasn’t an easy crowd for a Friday afternoon and high school students but he held their attention. We heard great reviews from the faculty and how relatable Justin was to the students. The faculty were so impressed with how quiet they were — a true indication of how he kept them engaged. I think it was a homerun!”

"All is well. Justin was great. Justin was the consummate professional. His presentation was tailored as we sought and relevant to all. Students, parents, teachers, administration all loved it."

"Justin was wonderful. I was there for the whole thing. He had teachers and kids laughing and nodding their heads in agreement. It was the youthful, truthful jolt of energy we needed! You should also know that several administrators told me they had already booked Justin based upon videos we circulated about Mr. Fascinate or they were planning to book him after they saw him in action. Justin is humble, gracious and was happy to interact with our participants."

"We had an outstanding summit and Justin was awesome. His presentation connected with the Innovators and parents. He was received very well and engaged the audience."

"Your keynote was absolutely perfect – it was funny, personal, motivating and educational. You hit all the right points and got the room absolutely buzzing. And you took a tough ask – a very scripted panel – and moved it right along. It was exactly right, and we are very grateful for your skill. What’s more, I want to thank you for your hard work and preparation leading up to the panel. You didn’t miss a deadline, and you took feedback into stride in a way that informed the overall presentation in the best way."

"He has a way of intellectualizing pop culture topics and STEM that our audience wouldn't typically be interested in or privy to."

"Justin Shaifer is a gifted public speaker. He has an uncanny ability to analyze, understand, and relate to his audience. In summary of his public speaking talent, I will simply say that I believe Mr. Shaifer, the future Dr. Shaifer, is a Game Changer!"

"Justin was a big hit. His remarks really resonated with the audience and I’m sure he gained many new fans.  He was extremely cooperative and easy to work with." 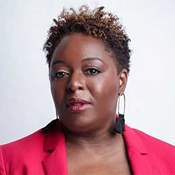