The first Latina to complete U.S. Air Force Undergraduate Pilot Training and graduate in the top 5% of her class (of 48) with a fighter qualification to fly the T-38 as an instructor pilot, Olga E. Custodio points to three principles that have helped her become successful in a profession dominated by men: overcoming self-doubt, staying open to possibilities, and seeing herself as an equal. Read More >

The path to her dream, however, has not been a walk in the park. While studying at the University of Puerto Rico, she tried to participate in the university’s Reserve Officer Training Corps program but was denied the opportunity, as women were not allowed at that time.

But Olga never gave up hope, and she went on to fulfill her dream of becoming a commissioned military officer — and then some. A female military aviation pioneer, she served for 24 years in the U.S. Air Force, retiring as a Lieutenant Colonel. As a pilot instructor pilot, she received an Aviation Safety Award for superior airmanship for her handling of an engine failure in-flight emergency. After transitioning to the U.S. Air Force Reserves, Olga became the first American Airlines Latina commercial airline pilot and later upgraded to Captain. Besides the T-38, Olga flew the T-41, B-727, F-100, B-757, and B-767. She owns a Cessna T210L and has also flown several general aviation aircraft like the Stearman biplane, Cessna-172, Beechcraft-35 V-tail, Cirrus Vision Jet, and few others.

Today, Olga is retired with over 11,000 flight hours to her name. Now a speaker and community leader, she works with several nonprofit organizations, (Latino Pilots Association, Order of Daedalians, Ninety-Nines, and Women in Aviation, International) that advocate for inspiring and empowering students, especially those from underserved communities, to pursue careers in aviation and aerospace. As a STEM advocate, she has also volunteered her time as a speaker and role model at local schools, universities, corporations, and military base groups, encouraging young women and men to reach for their dreams. Olga is a mentor with the Women in Aviation International, Aviation Explorers, and the School of Aeronautics of the InterAmerican University in Puerto Rico to mention a few. In 2017, she was inducted into the San Antonio Aviation and Aerospace Hall of Fame. In 2022, the Hispanic Heritage Foundation (HHF) gave Custodio the STEM Award during the 35th Annual Hispanic Heritage Awards. Olga recently co-authored in the Latinas in Aviation anthology and is included as one of the 30 inspiring Latinas/Latinos who have shaped the United States in Nuestra América, published by the Smithsonian Institution.

By pioneering many firsts during her career, Olga has shattered stereotypes and served as a powerful role model for aspiring to become a pilot. From breaking barriers and overcoming challenges as a woman in a male-dominated profession throughout her career, Olga has gained essential life insights and perspectives that she shares with everyone, especially women working to achieve their dreams.

Olga lives in San Antonio, Texas, with her husband of 47 years, Edwin — who is also her best friend, supporter, and advocate for everything she sponsors. They have two children, Marcia and Edwin II, and one grandson, Jedi. Read Less ^

Holding the distinction as the first Latina to complete UPT and become a pilot, Olga has proven that gender is never a hindrance to be successful in a profession that is dominated by men. Overcoming self-doubt, staying open to possibilities, and seeing oneself as an equal to be relevant are just some of the principles she believes in, and have driven her to be successful in her chosen career.

Olga considers her sheer determination as one of the essential assets that propelled her to succeed as well as understanding how her actions and feelings as an airline Captain and crewmember affected her crew. Identifying her responsibilities as the authority in charge of the aircraft’s flight operation and safety helped her manage and understand the value of listening to each crew member’s needs to assist them in fulfilling their duties.  Her perseverance and tenacity drove her to accomplish her duties regardless of the situation. In all the tasks she has undertaken, Olga has always demonstrated her strong motivation to achieve results that would deliver positive impacts and inspire others.

Overcoming self-doubt, staying open to possibilities, and seeing oneself as an equal to be relevant are just some of the principles Olga believes in and has driven her to be successful in her chosen career.

"On behalf of UKG Vets and Unidos, the employee resource groups at UKG, we would like to thank Lt. Col. Custodio for her presentation this week. We really enjoyed hearing about her triumphs, how she overcame adversity, loved hearing about the things she is still involved in today, and really appreciated all the advice she provided our resource group members. We loved hearing that 'querer es poder' and that the power is within us. Please extend our gratitude and appreciation."

"Everything went marvelously on my end. She was at her best talking to people individually, both at dinner and for a long time after the talk (since of course a large number of students and local community members wanted to chat with her). She was gracious, friendly, and inspiring. I definitely look forward to working with APB in the future. Thanks for all you do."

"Overall, the event was a great success! From start to finish, working with Olga Custodio and APB was a great experience. Olga’s ability to captivate the audience using her mantra of 'Querer es Poder' was magnificent. Hearing her story of diversity and equity is a must for all experiencing adversity in their own lives. Olga is an exceptional human being that I would gladly work with again!"

Latinas in Aviation: Stories of passion, power, and breaking into the aviation industry 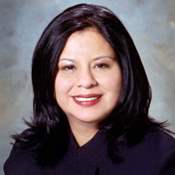